by Rob Williams on February 6, 2014 in Peripherals

Page 2 – A Look at the Software & Final Thoughts

For the sake of preventing you from installing out-of-date and potentially buggy software, Func requires that you hit-up its website in order to grab the latest software package for the KB-460. At a mere 6MB, it’s a small pill to swallow.

I hate to be so blunt about it, but most peripheral software is not too good, and it can become “horrible” if macros are involved. Outside of companies like Logitech, a lot of companies believe that their peripheral software should use dark colors, a hard-to-navigate and understand interface, and be headache-inducing. That all being the case, I was relieved to see that Func kept things simple here, and not to mention light-colored.

The KB-460 is able to store five profiles at one time, and if more are needed, it takes just half a minute to export the entire current configuration and import another – by far the smoothest experience I’ve ever had with that task. As seen in the below shot, almost every key on the keyboard can have its function reconfigured – the exceptions are F7 – F12, Win, and Fn.

To set a macro or change the function of a key, you’ll need to click one of the “M” keys to the left of the interface, and then choose which key on the mock keyboard to the right you want to associate it with. You can, for example, hit F6 to launch a calculator, hit 1 to cut and 2 to paste, or * to execute a macro. Want a dedicated print button? You can do that, too. 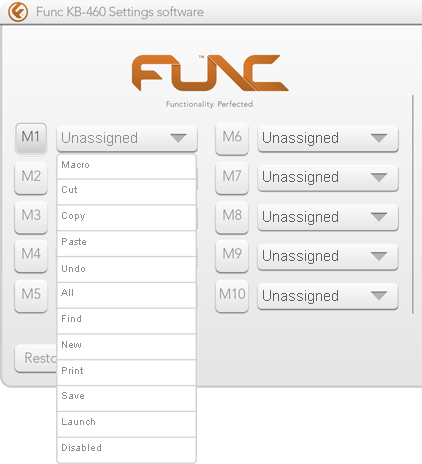 Func’s software doesn’t have predefined apps to launch like some peripheral packages do, so be prepared to surf your PC via a standard Windows file manager to locate an app’s executable. For me, I don’t have great need for such functionality, but I do have a need for macros.

Creating a macro is simple. After loading up the Macro recorder, you’ll hit the record button and then type away. After you’re done, you can stop it and choose whether you want the macro to run once, forever while pressed, or forever until another key is pressed. Unfortunately, the software doesn’t take delays into consideration, but instead mimics each keypress in a timed (50ms), sequential order. I hope that this gets added to the software in the future, because it’s a useful option for those using macros in a time-sensitive manner. Along similar lines, I’d love to be able to create a macro or shortcut that requires multiple keys to execute (eg: Ctrl + F1). 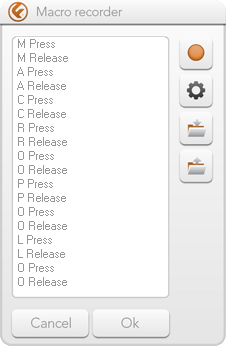 This concludes the easiest software tour for a peripheral I’ve ever done. While I do think a bit more functionality could be added here, this is a fantastic initial offering.

Over the course of the month that I’ve been using Func’s KB-460, I’ve come to like it quite a bit. That’s no doubt helped by the fact that I like CHERRY MX Red switches, and also the fact that this mech is no larger than what I need. Of course, it also tackles a personal want: The ability to use macros without clogging the surface up with dedicated keys.

From a usage stand-point, the KB-460 has been fantastic; I have no complaints. Well, except for the fact that it mimics an issue I had with Thermaltake’s MEKA G-Unit, where the media keys insist on loading Windows Media Player, totally ignoring my player of choice. As I mentioned in my G-Unit review, Thermaltake issued a firmware update that half-corrected the issue, and being that I never had this issue with Logitech’s G710+, I can’t blame anything other than the firmware or software here. After talking to Func, I was told that reinstalling the software could rid the issue, but that wasn’t my experience.

At $120, the KB-460 is a little more expensive than other offerings, but there’s a lot that Func has done well here to sway some towards it, especially those who appreciate having macro and media functionality built-in as alternate functions rather than dedicated keys. For someone who values desk space but doesn’t want to forego that kind of functionality, the KB-460 is a great solution.

While I’d like to see the media keys not insist-upon Windows Media Player, and I feel that the macro software should offer the ability to add and adjust delays, I’ve enjoyed my time with the KB-460 so much that I plan to keep using it indefinitely. I mentioned earlier that Func takes care of a couple of issues that other companies wouldn’t, and it executes them well. This is one keyboard that definitely gets my seal of approval (but please, Func, take care of these minor niggles!).