by Rob Williams on January 1, 2014 in Peripherals

In the summer of 2010, and amidst what I’m sure was uncomfortably humid Taipei weather, Thermaltake took the veil off of its “eSPORTS” peripheral line. As the name suggested, the line was to target gamers, and gamers only. If I recall, Thermaltake even had some pro-gamers on-hand to prove the line-up’s worth to the public.

A lot has sure happened in the three-and-a-half years since that announcement. Today, Tt has a wide-range of gaming mice, keyboards, headsets, mousepads, and even accessories like gloves, jackets, t-shirts and an external audio card. I think it’d be appropriate to say that Tt’s eSPORTS line is on fire, and we’ve yet to see what will be unveiled at next week’s CES.

When mechanical keyboards hit the scene in a big way a couple of years ago, Thermaltake wasted no time in latching onto the product category and releasing its own models. Overall, many of these have been very well-received, including the MEKA G-Unit, which I’m taking a look at here.

While the original MEKA G-Unit has been available for over a year, this version in particular was launched just this past summer. Thermaltake was kind enough to shoot this keyboard over to me when the last one I was using broke (by my own impatience doing while cleaning it, unfortunately), so while the model has been out for a little bit, I still wanted to jot up a quick review and give some thoughts on it.

As seen in the photo above, the MEKA G-Unit is much larger than most other keyboards. The biggest reason for this is that it’s made wider thanks to the inclusion of 12 dedicated macro keys, and despite that increased width, there’s about half an inch of chassis at either end of the board past its keys. Further, the included arm-rest makes the entire unit taller.

What makes this MEKA G-Unit different from the others is that it’s a “Red Switch Edition”, which is well-evidenced with the next photo: 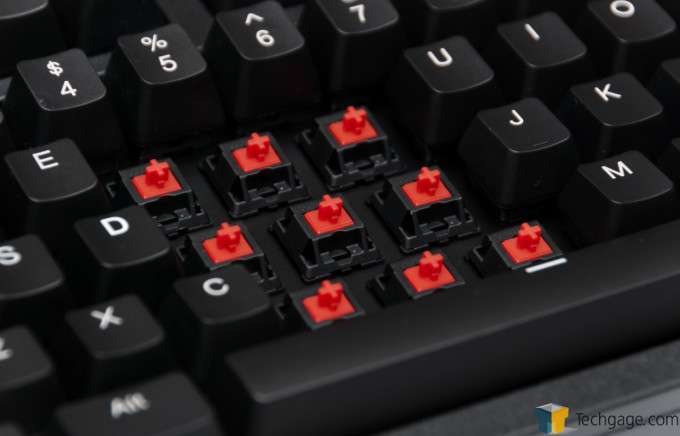 Of the most popular CHERRY MX switches used in mainstream mechs, Red is the easiest to push – it has the weakest actuation force, no click when it bottoms out, and no “bump” (felt when the key is close to half-pressed). Thermaltake offers other MEKA G-Unit models with Blacks (which like Red, but requires a bit more force) and Blues (which requires a bit more force than red, and features a click and bump).

Omitted colors include Green (a Cooler Master consumer exclusive for the moment), and Brown (light actuation force; features a bump).

I admit that I find it a little bizarre that Brown was skipped over, as it’s become a de facto “one-for-all” choice. But I’d imagine this boiled down to Thermaltake not wanting to add even more models to the G-Unit line-up. Instead it settled on Red / Black (this is a gamer-focused model, after all), and then chose Blue to take care of those who like click and/or bump.

Since there’s more to a keyboard than its switches, let’s see what else the MEKA G-unit brings to the table. First up, the left side, which is sprinked with 12 dedicated “T” macro keys – more on these later. 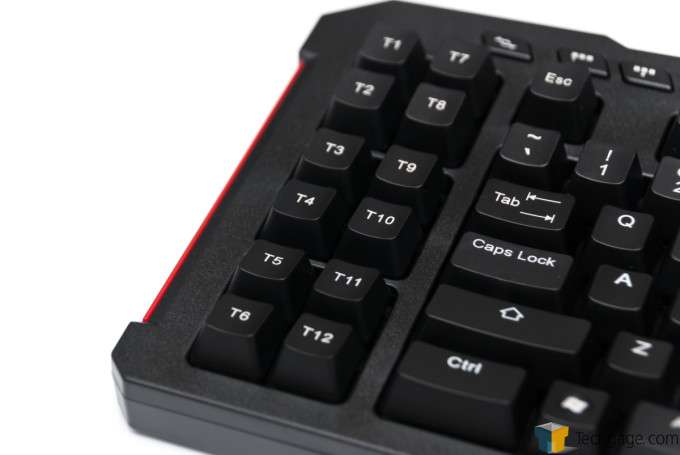 Above the Esc key are the profile switchers; three in total. The button to the absolute left is to switch between game mode and normal mode; the latter disables all macros (which in some cases might not be desired). 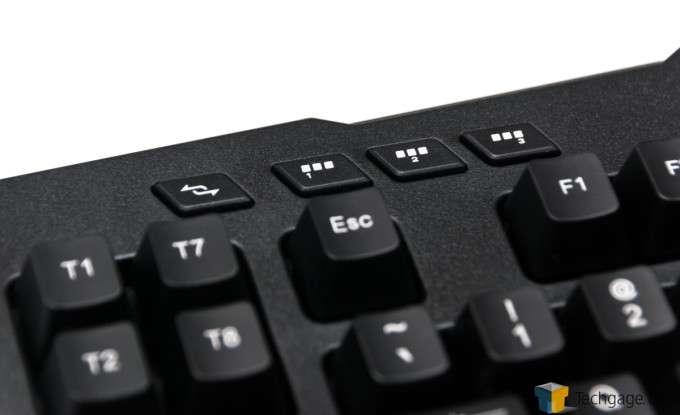 On the opposite end of the G-Unit and at the top are self-explanatory media keys, and atop the numpad are keys for volume adjustment and also control over the backlight level. 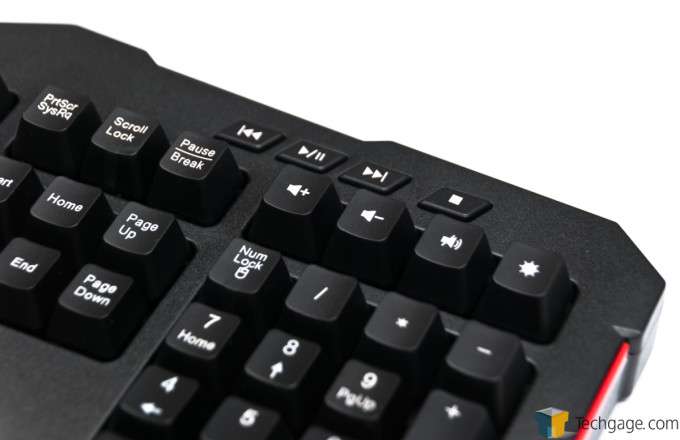 Taking a look at the back, we can see what really sets the G-Unit apart. USB ports have become somewhat standard on large keyboards like this, but audio ports that feed into a dedicated USB audio device is unique. When the G-Unit is plugged in for the first time, Windows will detect and install an audio device called ‘HOLTEK USB Phone’, which handles both output and input. To be clear, this is not some sort of passthrough, so if you have a discrete audio card, you’ll want to plug into that instead.

Here’s a shot of the board with its palmrest detached. It’s worth pointing out that while some of the other G-Unit models offer complete backlighting, this particular model doesn’t. Instead, the white LED backlighting is limited to WASD, the arrow keys, 2/4/6/8 on the numpad, left Ctrl, left Shift, and the spacebar. Further, each one of the three “Lock” keys will light up when enabled.

There’s not too much going on in the back of the G-Unit, but its design does highlight the fact that it’s built well, which is even true about its retractable legs. At the top center, the board’s removable cable can be routed to increase its durability (recommended to help protect the connector).

In the box you’ll find a protective case, the braided USB cable, and pouch for said cable. It’s rather clear that Thermaltake does not want you to end up hurting the G-Unit, though as its gangsta name implies, it can still handle a bit of abuse.

Also included is an eSPORTS sticker, a small manual, and driver CD-ROM. As with all peripherals, it’s recommended to go to the official website to get the latest driver, which in this case is important because it fixes up a couple of launch niggles.

The fact that the MEKA G-Unit includes an internal USB audio card and has 12 dedicated macro keys definitely helps set it apart from most others, but the fact that it even includes a protective bag is something not entirely expected. Overall, a good showing here.

Can the software and usage match?