Though most of our notebook reviews go into some depth regarding the included software and the setup process, this one will be a bit lacking due to a few complications we had arise. I’ll tackle all of that here, but please be aware that my complications are not representative of what a regular consumer should expect, although I do hope Gateway takes my criticism to heart.

The setup process itself was simple – no different than any other notebook. Boot up, type in your credentials, wait a few minutes, and boom… desktop. Normally at this point, I note all of the applications installed, take screenshots, et cetera. However, at the time I was testing out the notebook, I was also preparing for IDF and NVISION. So, I took the screenshots I needed, packed up the notebook and took it with me.

When I returned, I decided to wipe the notebook clean, using the included restore disc. Little did I know, this restore disc does nothing but install the OS. Unlike true restore discs supplied by other notebook vendors, Gateway’s does not follow a typical Out-Of-Box Experience (OOBE) methodology, so no pre-installed applications are returned, nor are the system drivers.

When I arrived at the desktop to see even the video driver wasn’t installed, I was a bit perturbed, to say the least. I was left with a barebone notebook, and Gateway doesn’t even include an actual driver disc, so all the drivers had to be downloaded from Windows Update. Luckily, since the notebook includes incredibly common components, Windows Update took care of everything.

So, the obvious step next would be to check for a recovery partition, which the system did have. This partition is about 15GB with 8GB used, so I felt confident that a true restore could take place – but I was wrong. Booting up and pushing F8 is supposed to open up a restore menu, but not here. This was due to the fact that I reinstalled Windows, which essentially wiped out the chance of that ever happening.

Gateway was unable to help me from this point, and booting into the recovery partition was deemed impossible. I’m confident it is possible, but I just haven’t figured out how.

Though no restore disc is included (the disc included is just a general Windows Vista install DVD), what you are supposed to do is create your own, with the help of an included tool. It will capture all the drivers and whatever else, then create a disc that’s supposed to be used during the actual restore process. That might retain all settings and applications to their original state, but I was unable to test it for myself.

It goes without saying that Gateway should have a better solution than this. They’ve been in the notebook business for a while, and I cannot comprehend why a restore disc is not included. Even if someone does create a restore disc with their tool, what happens if the MBR becomes corrupt? They’ll wind up in the exact same situation I found myself in. For the price of the notebook, the lack of a restore disc might be warranted, but since they are pushing out non-configurable machines, it wouldn’t be hard for them to make the restore discs themselves.

That insane rant out of the way, let’s review the SYSmark 2007 Preview results, compared to other recently-reviewed notebooks. Please note that these notebooks are not in the same class, and the Gateway is our lowest-end (least-expensive) offering. 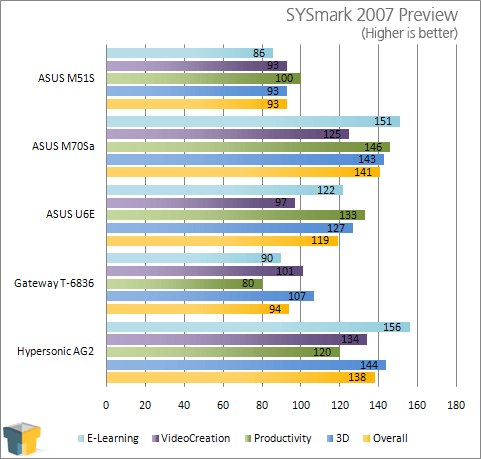 The T-6836 compares nicely to the ASUS M51S, which retails for closer to $999. As far as battery-life goes, the notebook lasted 1h 52m when playing back our DVD movie, which is on par with most other notebooks we’ve tested at this price-range. It will be able to make it through a short movie, but your lengthy movies will have to stay at home.

Despite the fact that this notebook frustrated me with the lack of a proper restore disc, I still enjoyed the time I spent with it and didn’t find anything truly horrible to note that would be a good reason to stay away. The T-6863 is inexpensive, packs lots of RAM and a fair amount of storage, has a nice design and is a great size for a notebook you need to carry around. 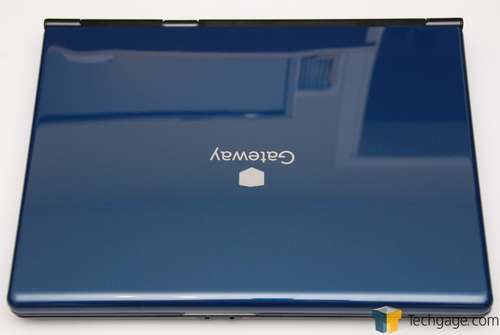 I already explained my gripe with the restore disc, so there’s no sense in mentioning it again, and I won’t. What this notebook does deliver is a solid solution built for a good price. At no point during use did I find it entirely slow, nor did I find the machine to have a real “cheap” feeling. At $800, it’s actually quite hard to go wrong.

One thing I do appreciate is that Gateway pre-installs Windows Vista 64-bit, which means you can actually use your 4GB of RAM. Most other manufacturers have stuck with 32-bit OS’ despite installing 4GB of RAM, so it’s nice to see someone breaking the mold. In personal experience, I have found the 64-bit to be far more reliable than the 32-bit, so it makes all the sense in the world to go with 64-bit Vista nowadays.

If on an $800 budget (minus taxes, of course), then the T-6836 would be a good buy. It doesn’t pack a whack of extras as I’d like to see, but it’s hard to complain at the given price point. Spending even $200 more would avail you a more capable notebook (like the ASUS M51S for example), but only you know what your budget is like. For the price paid, this notebook won’t disappoint.

This will certainly not be the last Gateway notebook we take a look at, and now that I know of the certain restore caveat, I know what mistake not to make. Follow-up reviews will be far more in-depth, and I look forward to seeing what their other notebooks are made of.