Since the UC7807u was designed to be full-featured, yet remain affordable, some components in the machine reflect that. The processor, for example, is most definitely not Intel’s best, but at 2.0GHz, it’s going to be more than sufficient for most needs. Likewise, with Intel’s integrated graphics bundled in here, I wouldn’t expect to do much with 3D outside of simple applications like Google Earth.

Everything else is fine, though, such as the 3GB of RAM (odd though, that they chose two different makes for the varying densities), a 250GB Western Digital hard drive, 13.3″ display (1280×800), slot-loading DVD drive and more. I do wish that being a 13.3″ monitor, the allowed resolution was 1440×900, but given the price, I guess there’s little use in whining.

This notebook delivers in pretty-much all areas. It includes a reliable WiFi chip, a good webcam, HDMI output (a really nice bonus for those who ever hook up their notebook to their TV or higher-end monitor), a 6-cell battery which is capable of delivering between 3 – 3.5 hours of usage depending on workload. Considering this notebook is currently selling for $600 at multiple e-tailers, I’d have to say that it’s quite a deal.

Not surprisingly, Gateway opted for Windows Vista Home Premium on this notebook, and since it only includes 3GB of RAM, the fact that it’s the 32-bit version won’t matter to too many people (I still think 64-bit is the only way to go, so I wish companies would hurry up and agree). After booting up, you’ll be asked the usual questions, such as your username, timezone, et cetera. Once done, you’ll be greeted with this desktop: 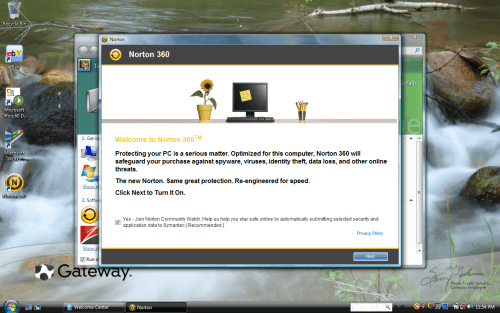 I’m not sure I should properly express how I feel about Norton’s installers, but believe me when I say I don’t like them at all. What bugs me most is that you can’t simply uninstall it from the get-go. Rather, you have to uncheck the default option to join their community watch program, then click next, then cancel, then go and uninstall. It’s really not enjoyable to deal with. This of course won’t matter if you choose to use the application, and if so, all the power to you.

On the desktop, an employee-shot photograph graces the background, and a few application icons can also be found. Of these, only one is a true application ready to go (Microsoft Works)… the others are trials. Speaking of bloatware, what all do we get here? 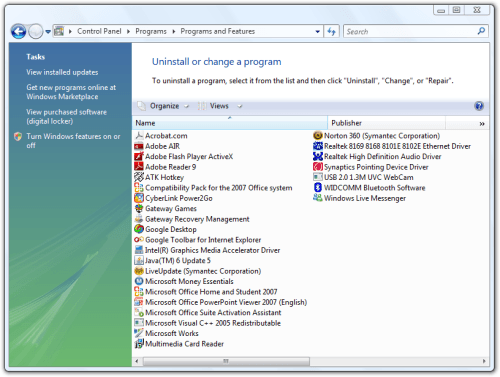 Although the software situation is a bit better than another notebook I just reviewed, it’s not that close to being ideal, either. But, it is manageable, and if it helps to keep notebook prices low, then I can’t complain too much. Of all the bundled software, the heaviest is Norton 360, Microsoft Office 2007 and Gateway Games. Each of these take a little bit of effort to get rid of, with Norton of course being the worst.

CyberLink Power2Go is another application that’s actually not a trial, and it allows some simple CD/DVD handling including such tasks as creating a music CD, copying a disc, creating a data disc and even the ability to create a password-protected data CD/DVD, which also allows the option for encryption. This isn’t at all a bad tool to include, especially given it’s “free”.

Unlike some companies that bundle their notebooks to the nines with custom software, such as HP and ASUS, Gateway doesn’t focus on such tools, so there’s really none of that here. If anything, all that’s custom is their recovery disc creator and application restorer. I should note that this is pretty-much the best such tool I’ve used. Within a half-hour, you’ll have two freshly-created discs that can be used to later restore the notebook to its factory state. Just be sure to take care of this as soon as possible, since Gateway doesn’t include such discs in the box. 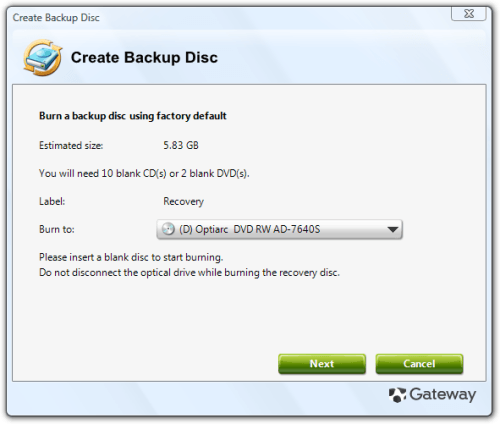 Another area I have to give Gateway kudos is with regards to their application recovery. If you go into the same tool that allows you to create the restore discs, you can also access a section that allows you to restore applications you previously uninstalled. The reason I like this, is because it’s fast. I uninstalled CyberLink’s Power2Go, for example, but I wanted it back. So I went through this tool to get the job done, and it was literally on my desktop ready to go in about 20 seconds.

That feature doesn’t require the discs to utilize, as the hidden recovery partition stores all of that information. I’m still surprised by just how fast it is… I wish I saw the same from all other notebooks I end up testing!

Most modern notebooks will have no problem running Linux, and the UC7807u is no exception. After booting up with the Ubuntu 9.04 CD, I was at the desktop within minutes. After taking care of some partition work, fifteen or so minutes had past and the OS was installed. After a reboot, I double-checked to make sure that the GRUB boot loader was up to snuff, and it was.

Like most notebooks with recovery partitions, Ubuntu (and others) will create a menu entry for both Windows and the recovery, so I highly recommend editing the menu.1st after your first boot to remove the latter. The reason is because it takes no effort to get in there, and if someone borrows your notebook and doesn’t know what they’re doing, they may very well restore your notebook back to factory condition. Wouldn’t that be a bad day! 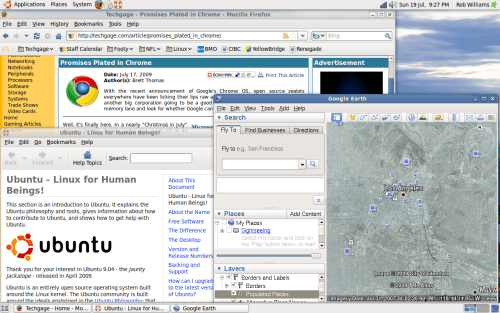 That aside, everything works out of the box, including the audio, the 3D graphics (to a limited degree… Intel’s graphics aren’t the most robust), the webcam and pretty much everything else. Even the HDMI functioned just fine when connected to my 30″ LCD, though my max resolution was a bit limited (this could be fixed, I’m not familiar with tweaking it).

Overall, the Linux support is quite good, and little is lacking. The 3D isn’t the best, but assuming you don’t want to play the top-end Linux 3D games at blazing speed, you should be fine.