If there’s one thing NVIDIA cannot be accused of, it’s not giving its fans freedom of choice. More than any other GeForce generation in recent memory, the 600 series is truly packed to the gills with choice. We not only have proper steppings ranging from 610 up to 690, but sub-models in between, such as the “Ti” (Titanium) cards.

One such card is the one we’re looking at here, the GeForce GTX 650 Ti. This is a card that seemed unlikely to come to fruition simply by the fact that NVIDIA’s line-up was already so full. After the GTX 660 launch, I felt confident that that would be it until the 700 series – but no. It’s clear that NVIDIA both likes to remain in the limelight, and make sure people get exactly the card they’re looking for at the price they can afford.

Let’s take a look at the 600-series table below to gain an understanding of the differences we’re dealing with:

The GTX 650 Ti doubles the core-count of the GTX 650, has a decreased core clock but increased memory clock. Compared to the GTX 660, it suffers the loss of 192 cores, slight clock reductions and a drop from 192-bit memory down to 128-bit -these cards need to be different, after all. Thanks to this table, it’s easy to understand why the GTX 650 Ti is much closer to the GTX 660 than the GTX 650.

As a middle-of-the-road card in NVIDIA’s 600-series, the reference model looks the part: 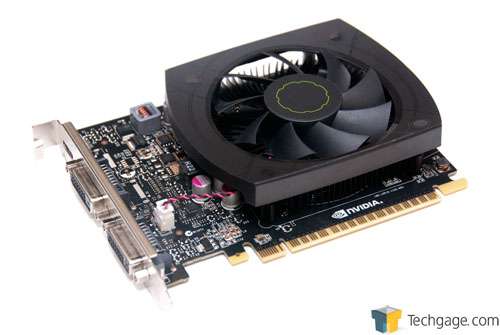 The card we’ve benchmarked is GIGABYTE’s GV-N65TOC-1GI, an overclocked model; boosting the core clock from 925MHz to 1032MHz but leaving the memory clock alone. This increases the price a bit (about $20), but as overclocks like this are not rare, you should be able to run a similar config if you pick up a reference-clocked model that has a sufficient cooler.

Given we had a reference model here, it was our intention to benchmark it alongside this GIGABYTE one, but it unfortunately died overnight one night preventing us from finishing-up our benchmarking. I’m not sure what caused it, but I don’t suspect it’s typical. 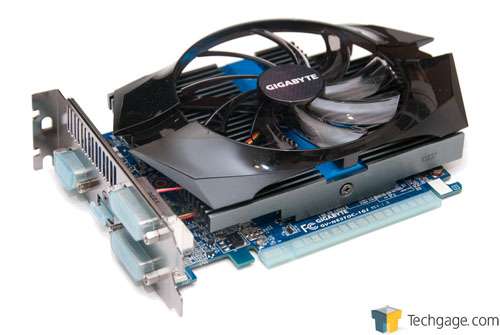 GIGABYTE’s card features a cooler similar to the reference, though with a larger heatsink and fan. It also looks considerably better as well, depending on your tastes. Unlike the reference model, it features a VGA and HDMI port in addition to dual DVIs. For much-improved cooling, GIGABYTE also offers a GV-N65TOC-2GI model, using a ‘WINDFORCE’ dual-fan cooler, retailing for about $175 (+$35 over most reference-styled models).