Helping to round out Kepler’s middle-ground, NVIDIA today has unveiled its GeForce GTX 650 and 660 graphics cards. With the 660 Ti having been released not long ago, a non-Ti version might seem a bit strange so soon, but both cards are a fair bit different. While the Ti edition edges super-close to the GTX 670, the GTX 660 lands itself smack dab in between the new GTX 650 and the 660 Ti. And at $229, it could be the sweet-spot you’ve been looking for.

We’ll be posting a review of GIGABYTE’s edition of the card tomorrow, so keep an eye out for that. What you can expect though is a card that beats out AMD’s Radeon HD 7850 quite readily in many tests. Currently, the 7850 retails for about $200, but we’ve seen up to a 30% increase in performance on the GTX 660 – there’s quite a gain there.

Relish in the beauty of GIGABYTE’s card that we’re using as the basis of our review: 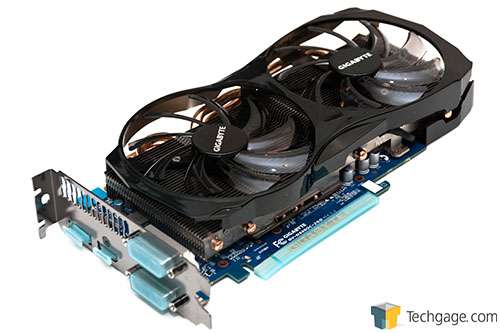 The non-Ti GTX 660 has 40% less cores than the Ti version but has a higher clock, so in all regards, it’s going to be quite a beefy card. The GTX 650 on the other hand shouldn’t be called a GTX. It’s just that simple. It has the features of a low-end card, even matching the core-count of the undeniably low-end GT 640. It seems NVIDIA really doesn’t care about the monikers it gives its cards anymore, whereas I believe GTX used to mean something. But I digress; here’s the rest of NVIDIA’s current line-up:

Although NVIDIA is launching its GTX 650 today, I haven’t talked to too many reviewer friends that actually have one. It could be that NVIDIA really isn’t focusing too much on that part, I’m not sure. Oddly, it hasn’t even been a part that’s been talked about much leading up to this launch, though a mysterious Ti version has been.

Again, stay tuned for our full look at NVIDIA’s GTX 660 from us tomorrow. It might just be your next GPU.