Building a silent PC or on the look-out for a quality mid-range graphics card offering? Gigabyte’s 8600GTS includes the best of both worlds. In addition to including a passive cooler, a free copy of Supreme Commander can be found here also. Of course the important question is: Does the overall performance warrant your attention?

Whether or not you are looking to purchase a low-end, mid-range or high-end graphics card, the choices are endless. It certainly doesn’t help when there are five-hundred different versions of a card available. Thanks to this, it’s smart to read around to find out which card suits you best, since you could easily purchase a card that doesn’t meet your expectations, or vice versa, paying more for a card that has power you will never touch.

The card we are taking a look at today comes from Gigabyte, a company better known for creating feature-rich motherboards, one of which we took a look at last month and were impressed with. Like that P35C-DS3R board, today’s graphics card is also a ‘budget’ mid-range offering, retailing for an average price of $180 at most popular e-tailers.

This G86 card brings a lot to the table for gamers who don’t want to spend too much money. The retail price of this card is made even better considering it includes a popular game that currently retails for $30. Of course, that value is nil if you already own the game. Given the chance that you do, though, I’d bet you already have a suitable graphics card and would have no need to read this review.

Like the rest of NVIDIA’s 8-series cards, this one offers DX10 support, although there is virtually no reason to purchase the card based on that reason alone. 7900GS cards offer very similar performance, lagging behind in very few tests, but can cost $30 – $40 less. DX10 is still in it’s infancy and titles to fully support the technology are not common. The most recent offering, Lost Planet, has had many less-than-stellar reviews, so we are all still waiting for that killer-app to come along.

Who should consider an 8600GTS card? Anyone who wants a solid gaming card, that’s also silent. Because these cards run cooler than the 8800GTS/GTX, obviously, most graphic card companies are choosing to release them sans a fan. They will run a bit warmer this way, but the silence is usually preferred by most. That might lead you to believe that it would be a perfect HTPC card, but that would ultimately depend on the size of your case, since most passive coolers are far larger than those that include a fan.

Below is a list of the primary features of Gigabyte’s 8600GTS card, followed by a comparison to other 8-series cards.

One area where I have to give Gigabyte kudos is for their packaging. While this doesn’t matter much in most regards, it’s great to look at and the product itself is well-secured inside, to assure you receive everything in great shape. The 8600GTS has a Supreme Commander inspired box. In fact, SupCom is the primary focus of attention here, which seems a little foolish from a marketing standpoint. 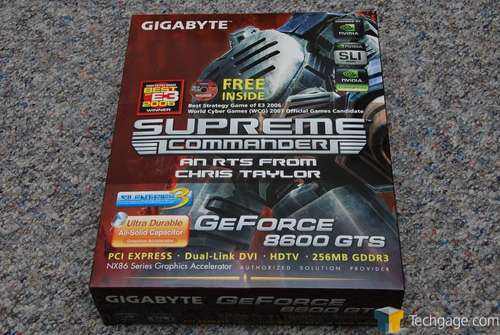 Besides the card, a driver disc is included in addition to two VGA-to-DVI adapters and also a video-out box. 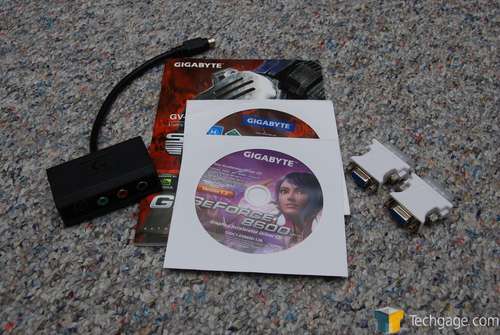 Though a modest offering, the card looks like a monster thanks to it’s bulky passive cooler. It’s certainly ugly, but it has a specific job to do, where looks don’t matter. 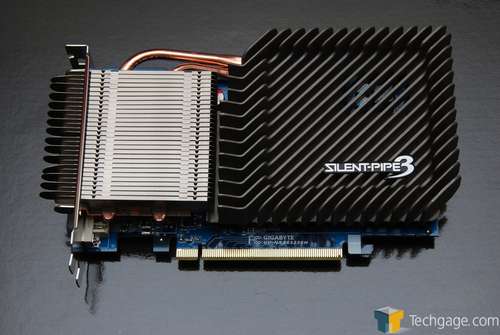 The GPU core is located below the bottom left-hand side of the bulkiest part of the cooler, right beside the angle change. The core is covered with a copper heatsink with heat pipes that extend through the rest of the massive cooler and run up and around into the array of fins. There is another heat pipe that extends towards the top right-hand corner of the cooler as well. Towards the back end of the card, heat runs along all of the fins and meets it’s ultimate death outside the back of your case. It’s a solid cooler design, though it still seems bulkier than it should have to be. 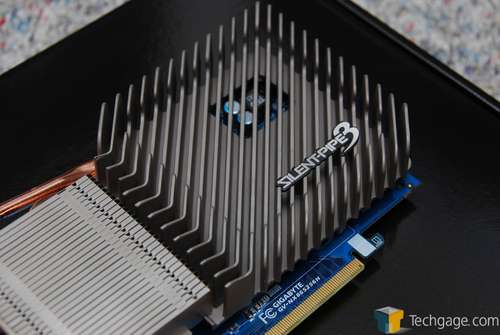 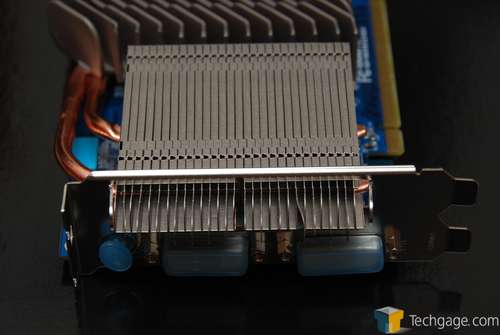 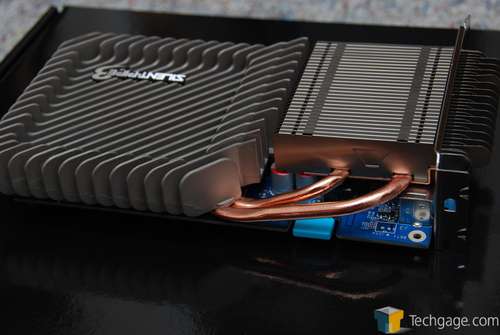 While the card looks enormous from the front, the back shows how modest it really is. The SLI bridge connector is protected by a small blue covering, a nice added touch. 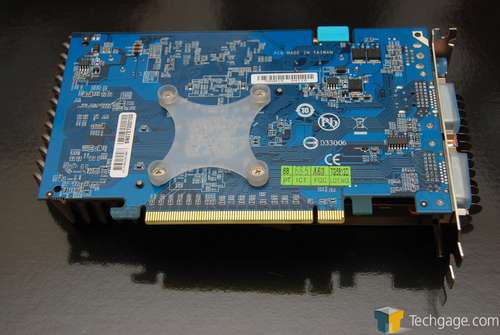 With introductions finally out of the way, we can put this card to the ultimate test… gaming benchmarks!