By now, Intel’s P35 chipset needs no introduction. It has boosted performance over P965 and brings a few new things to the table, my favorite being the S-ATA disable. In our reviews of ASUS’ own P5K and P5K3, we were left impressed to say the least. Compared to our boards that utilize NVIDIA’s 680i and Intel’s 975x, the P35 cleaned house in near every test.

If you are in the market to build a new PC and don’t care for SLI support, then P35 boards are a good bet, unless you want to wait until X38 is launched later this year, which is supposed to be vastly superior to P35. Time will tell if that’s actually going to be the case or not, but so far it’s looking hopeful.

As mentioned in our intro, once P35’s NDA was lifted, motherboard manufacturers all over announced their new line-ups. ASUS themselves released a staggering seven P35-based boards and Gigabyte released five. MSI and abit also have great looking boards as well, a few of which we will be taking a look at in the weeks to come.

The board we are taking a look at today though delivers a newer concept, and one I still don’t completely understand. Users who purchase the board will have the ability to choose between DDR2 and DDR3 memory, which can’t be a bad thing, right? It means that consumers have a choice.

From a marketing perspective, I see this being beneficial for those who have DDR2 now, but want to upgrade to DDR3 down the road. But even then, why upgrade to DDR3 when DDR2 is not lacking in any way right now? Far down the road when 4GB of DDR3 doesn’t cost a limb, then perhaps it would be a great upgrade, but as it stands right now, there is no reason to set your sights on DDR3 unless you have found one of the few ways to utilize all of that excess bandwidth.

Though the performance benefits of DDR3 are yet to be seen, the fact of the matter is, it’s performance IS better than DDR2, primarily thanks to the faster frequencies. This is how it is, despite the fact that DDR3 has timings that make DDR2 fans weep. DDR3 is more efficient than DDR2, it’s just that most people don’t need to focus all of their attention to it. However, just because I can’t seem to see the sense in such a combo board, others may disagree and have personal reasons why a board like this is ideal. If so, please let us know your thoughts in our forums.

One might jump to the conclusion that because this is a combo board, it’s price is going to be extreme. It’s actually the exact opposite. This is more of a budget board than it is a high-end board, retailing for an average of ~$175. While not cheap per se, compared to the P5K and P5K3 boards we took a look at last month, which retail for closer to $230 – $250, it is.

One thing can be said about Gigabyte’s choice of box art… it’s the best I’ve seen. Clean, professional and delivers all of the information one would need when fighting with themselves over a purchase decision. The board is part of the Ultra Durable 2 series, which means it bounces off the floor when dropped.*

* Dropping board is a bad idea. 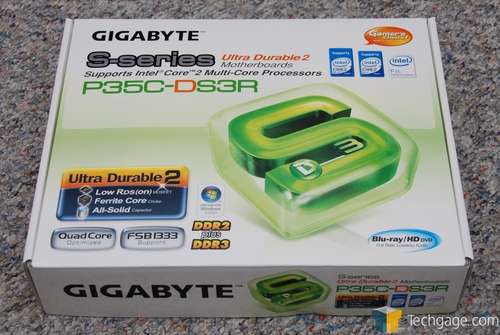 Besides the expected manual, software and case sticker, Gigabyte doesn’t go cheap on what you need. Included are four S-ATA cables, which include metal push tabs to secure it into the port and also for easy release. One IDE and one floppy drive cable is also included as well.

In the top-right of the image you will see the required components to get an E-SATA setup running. Though not tested for the review, the installation appears simple. You will need to clear open a port in the back of your computer and install it there. You will then plug a 4-Pin Molex connector from this port in to an available cable on your power supply. The two black cables are used externally, one for power and the other for the connection. 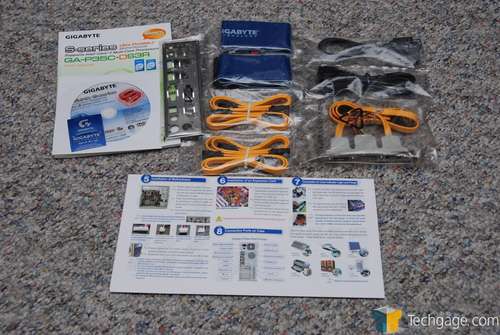 Next up, a look at the board and it’s layout.