If on the lookout for a good GPU at a great price, it’s easier than ever. NVIDIA’s 9600 GT packs a punch and retails for well under $200. We are taking Gigabyte’s stock-clocked solution for a spin to see how it stacks up against our other models. And yes, it overclocks like a beast.

When NVIDIA unveiled their first 9-series card in late February, the 9600 GT, people looked around and wondered what there was to be excited about. After all, we knew that NVIDIA brought nothing that notable to the table, except for higher clocks and good pricing. However, as far as I am concerned, the 9600 GT is the most interesting card of the 9-series bunch so far, even compared to the brand-new 9800 GTX.

The stock-clocked 9600 GT effectively kills the 8600 GT and rushes up to stand right behind the 8800 GT. It has fewer stream processors than the 8800 GT, but is clocked higher and luckily, doesn’t suffer from a small memory bus or density.

From a technical standpoint, the 9600 GT is a fantastic card all-around. As we’ve come to expect from NVIDIA in the past, a x600 GT card normally denoted one that was targeting budget gamers, and the performance normally reflected that. However, the 9600 GT blows those assumptions out of the water, because it comes so close to the performance of an 8800 GT (especially overclocked), that it would make a great choice for pretty much anyone looking to save money on an upgrade or a new build.

Last week, I took a look at ASUS’ EN9600GT TOP, which impressed me quite a bit, not surprisingly. Though I appreciate ASUS’ desire to send higher-clocked parts, it’s hard to do a proper comparison between makes and models without a reference-clocked card on hand. Thanks to Gigabyte, we have that here today. The big question I have is… could it possibly overclock as high as the ASUS model did?

Although the 9600 GT isn’t necessarily an upgrade from the last-gen 8600 GT, comparing both their specs in the table below may invoke a chuckle. The 9600 GT doubles the processors, increases clocks all-around, and also effectively doubles the memory and memory bus width. There is no comparison, quite frankly.

Compared to the 8800 GT, the main limiting factor is the lack of overall processors, a drop from 112 to 64. This will hurt in our overall real-world results when comparing the two, despite the 9600 GT’s higher clocks, but later in the review we will look to see if we can get close by overclocking the card in question today.

Before we jump further into the review, let’s first take a look at the card and its accessories. First up is a shot of everything included – a manual and driver CD, two VGA-to-DVI adapters, a Molex-to-PCI-E power converter and also a TV-Out box, which can accept a component connection. 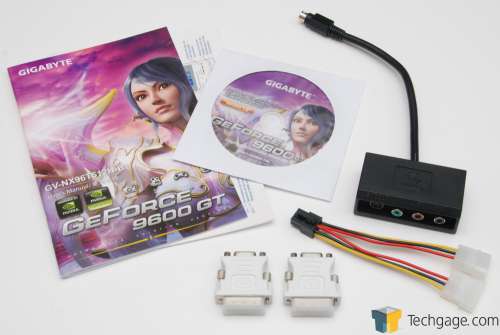 Gigabyte always manages to impress me with their card designs, and this is no exception. It’s hard to go wrong with a reference cooler, but the card graphic is enough to reassure you that you made the right purchase. 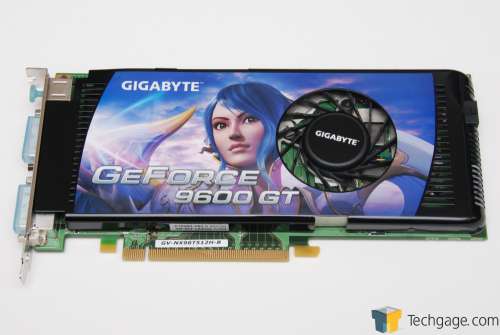 You know it’s going to be a good card when a 6-Pin PCI-E connector is required. By comparison, neither the 8600 GT or GTS cards required a power connector. 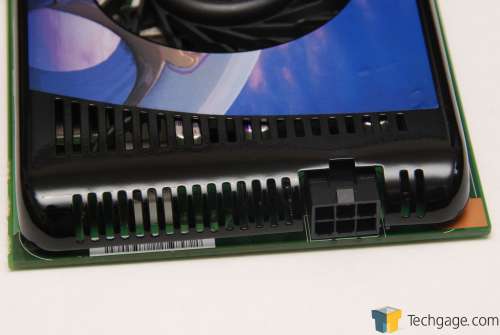 As the included accessories would have us assume, the card includes ports for TV-Out and of course, dual DVI. Since the card supports HDCP, having a DVI-to-HDMI adapter included, like the ASUS EN9600GT did, would have been great to see. 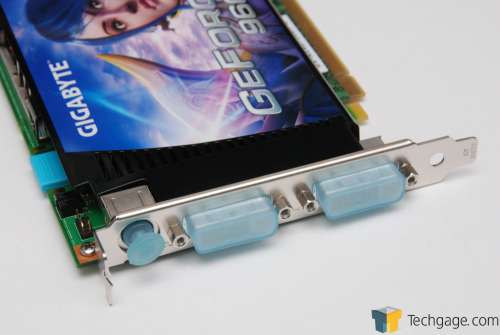 If you are planning to pick up a 9600 GT but want an after-market cooler, you can reference the hole-spacing here. The card as a whole is quite similar to an 8800 GT, with the four core screws and six surrounding screws being located in the exact same locations. 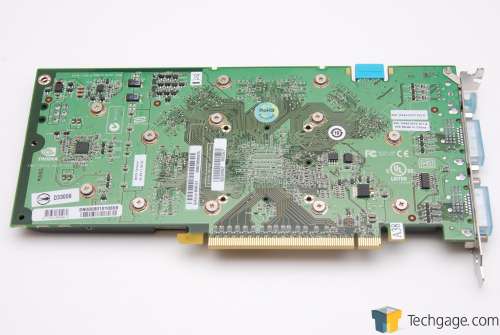 On the next page, we will take a look at our current testing methodology, which we recommend you take a look at if you have not already. Our methodologies tend to be far different than most sites. On page 3, we will jump straight into our test results.