When Intel’s Clarkdale-based processors were released just this past January, there was certainly no lack of motherboards available to pair the new chips with. Shortly after we posted our in-depth look at the company’s latest micro-architecture, I took a close look at both ASUS’ P7H55D-M EVO and Intel’s own DH55TC. In the same article, I made the promise that I’d soon follow-up with a look at Gigabyte’s most popular H55 offering, and so here it is.

Alright, yes, I’m a bit behind on things, that much is true. But over the course of the past couple of weeks, I’ve managed to spend a good deal of time with Gigabyte’s H55M-USB3, and I’ve been able to form some solid conclusions on where it stands in today’s gamut of H55-based offerings. At just above $100 (e-tailer’s I have checked have offered instant-rebates to bring it to $99.99, and then even cheaper with mail-in rebates), we can generally jump to conclusions on what we’ll see from the board. But given Clarkdale’s huge HTPC focus, I’d like to think of $100 being the absolute sweet spot for an mATX motherboard.

Fortunately, the H55M-USB3 offers quite a bit for the price-tag, making it a model well worth taking a look at in your quest for a great motherboard for either your regular PC or HTPC. I’m willing to guess that by the end of this review, you’ll have a pretty good idea as to whether or not this board is right for you. With its beefy feature-list, it not only targets HTPC goers, but enthusiasts and even overclockers (proof is on page 10).

The H55M-USB3, as we’ll soon see, sports a huge number of features and various Gigabyte-specific technologies. One example is Ultra Durable 3, which denotes the fact that the board utilizes high-grade components, such as Ferrite Core chokes, Japanese solid capacitors, and of course, 2oz of copper to line the PCB. In addition to this, there are other interesting features such as Smart 6, Dynamic Energy Saver and USB power 3x. As that latter feature would imply, yes, this board includes USB 3.0 support (but not SATA 3.0).

By simply taking a quick look at the H55M-USB3, it’s clear to see that Gigabyte really packed in a lot of features into such a small board. There are two full-sized PCI-E 16x slots, IDE and floppy connectors for those who want them, 7 SATA ports, multiple power phases and something that’s always a good sign of a board designed for overclocking… an 8-pin motherboard power connector. 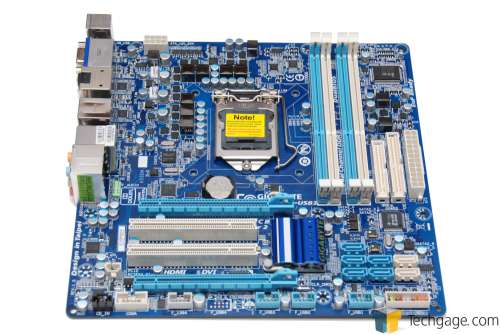 The first thing that caught my eye on this board was the lack of vertically-mounted SATA ports. I cannot stress enough just how useful those are, because rather than your SATA cables stick upward, they stick out the side of the board, freeing up room and making installation a lot easier, and cleaner. Sadly, no H55 motherboard we’ve taken a look at has had them, so I hope that changes soon.

In the same corner, we can see the full gamut of ATX chassis connectors, 3x USB internal connectors and also the tab required to manually reset the CMOS, should you need to take that route. The board does offer a FireWire internal connector, but it’s closer to the PCI slots. 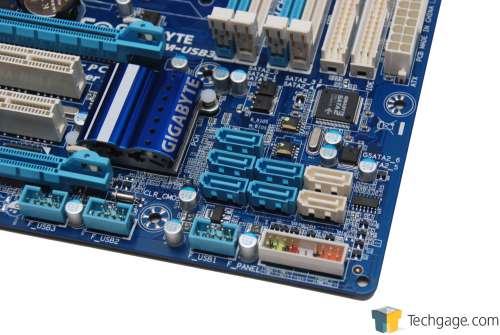 Moving up the board we find ourselves at the IDE and Floppy connectors, the 24-pin motherboard power connector, and of course, the four DIMM slots, capable of supporting up to 16GB of DDR3. In total, this board has 10 power phases, with 2 dedicated to the IMC/DDR3 as you can see in the photo below. While the H55M-USB3 looks innocent enough, in all its mATX glory, successful overclocking isn’t just a possibility, but a given. 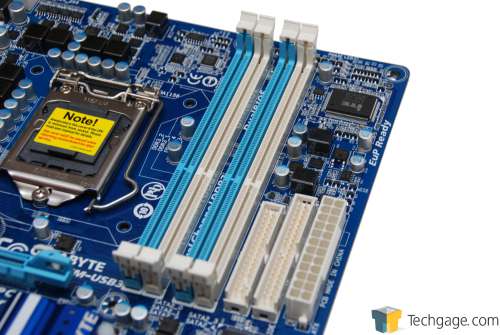 As mentioned before, this board includes 2x PCI-E x16 slots for dual-GPU (the bottom x16 slot could utilize other PCI-E devices if you don’t want a dual-GPU configuration), and also two legacy PCI slots. Below these, you can see the internal FireWire connector. 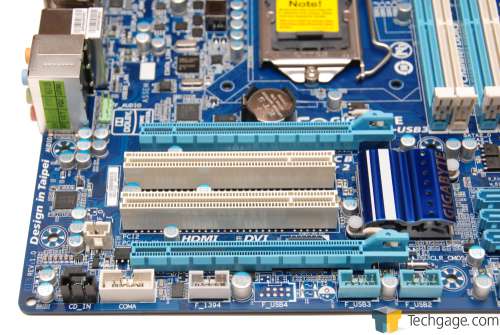 Given the ample amount of space around the CPU socket, and the complete lack of an exotic board heatsink, most any of today’s CPU coolers could be used without much of an issue. 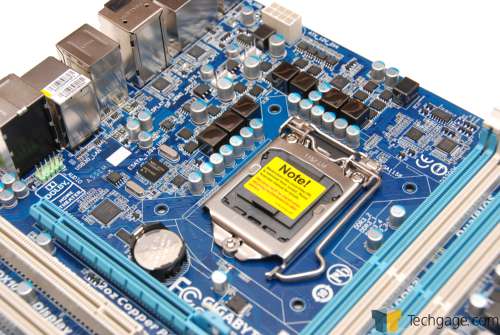 As you can probably tell by now, the H55M-USB3 truly does lack little in terms of overall functionality, and the back I/O panel only furthers this idea. Here we can see no less than 8 USB ports (2 being 3.0-capable), a FireWire, eSATA, 7.1 channel audio and a PS/2 keyboard or mouse.

Oh, but what’s this? Four display connectors? That’s right, despite being a ~$100 offering, this board includes support for VGA, DVI, HDMI and of course, DisplayPort. The latter is required if you want to run a resolution higher than 1920×1200 with the graphics built into a Clarkdale GPU. 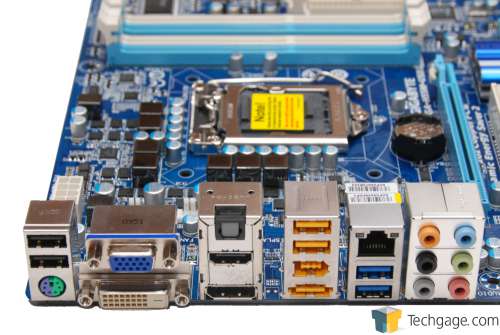 For the price that the H55M-USB3 retails for (~$100), it really is one feature-rich offering. In fact, I can’t look at it and pick out a single real fault. I’d still like to see vertically-mounted SATA ports, but those seem to be used only on higher-end (and higher-priced) boards. What I really liked to see here is all four common display connectors being used. Even ASUS’ higher-priced P7H55D-M EVO lacked DisplayPort.

Can we expect the same kind of feature-set from the board’s BIOS? There’s only one way to find out…