The “media center” PC concept has been around for ages, but as I don’t consider myself to be a huge media buff, I haven’t built an HTPC in the past, or even thought to. But as you might have been able to tell from my recent “Ripping Your Blu-rays the Easy and Free Way” article, I’m beginning to see the light, as they say. If there’s one thing I enjoy, it’s convenience, and I’m starting to understand the major draw that an HTPC can offer.

A mere five years ago, or maybe not even, it wasn’t only me who pushed away the idea of an HTPC. After all, not too many people were keen on the idea of building a special PC simply for the sake of viewing media. Instead, people either stuck with their DVD players, or watched media on their PC. The latter option isn’t always the most comfortable.

Today, the ease of building an HTPC couldn’t be easier. Components of all sorts are more affordable than ever, from processors to hard drives, and as an added perk, our motherboards have continued to get smaller. While a popular move today when building HTPC’s is to use micro-ATX motherboards, a quickly-gaining standard is mini-ITX. That happens to be the form-factor of the board we’re looking at here.

mini-ITX boards measure at just about 6.7″ x 6.7″, which means they are roughly 43% smaller than micro-ATX models. Given the small form-factor, such boards generally don’t boast major features, but nowadays, companies are trying hard to pack as much of a punch into a small frame, and in the case of this H55N-USB3 from Gigabyte, I’d have to say the company’s done a fine job at that.

Though I normally equate mini-ITX motherboards with HTPC’s, if you’re a die-hard gamer that wants to build as small a PC as possible, mini-ITX is definitely an option. You’re going to have to give a bit to get a bit, but in the end, if you are equipped with a proper chassis, you could easily build a PC that allows gaming up to 1080p resolutions with good detail settings. Heck, in the case of this board in particular, there’s even a little bit for the overclockers to enjoy.

If you’re not familiar with mini-ITX boards, then the photograph below might come as bit of a surprise. As you can see, though, Gigabyte sure didn’t cheapen out on the design. It features colors we’re used to seeing from the company, and there are even multiple power phases lined up around the CPU. 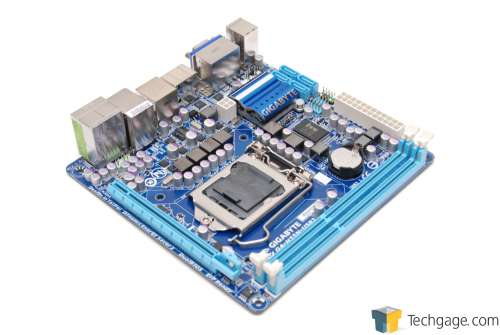 In a mid-tower or full-tower chassis, the board design here isn’t all too convenient, because the SATA and power ports will be at the highest point of the chassis, but that’s of no surprise. These boards are not in any way designed for a large chassis, but rather for those designed around the mini-ITX or even micro-ATX form-factors. As I don’t have such a chassis on hand, I found out fast how difficult it is to install such a small board in a large chassis (in this “case”, it was SilverStone’s TJ10).

Similar to most motherboards though, the GPU slot is found at the bottom, as it pretty well has to be, while the DIMM slots are found to the right side. As just mentioned, the power ports, SATA ports and also the ATX chassis connectors are all found along the top. Although it’s a bit tough to tell from the below photo, there’s a capacitor beside the 4-pin power connector, which makes it impossible to plug in an 8-pin cord. Fortunately, most PSU’s will include both, or at least a cable that breaks apart to solve the issue. 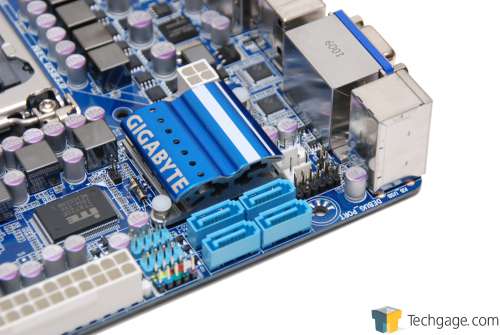 As you might imagine, there isn’t exactly a copious amount of space to be found around the CPU socket, but there’s plenty for thin and light coolers, or even high-performance coolers that don’t take up too much room. For our testing, we used Corsair’s H50 liquid cooler, and it installed just fine. The board also features a 6+2 phase design for stability and improved overclocking. If it seems a little strange to picture overclocking such a small board, don’t worry… you’re not alone. 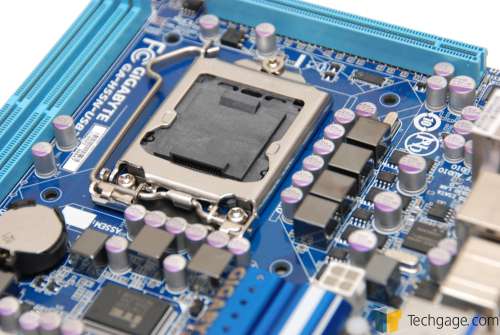 The H55N-USB3 might be a small offering, but it still packs a lot of functionality at the back. Being that the board uses both the H55 chipset and is designed for use with Intel’s Clarkdale processors, three different graphics ports are available – VGA, DVI and HDMI – along with a slew of other ports. Those include 6x USB, two of which are 3.0, eSATA, 1x LAN, a PS/2 keyboard/mouse, and also audio ports, including a S/PDIF. 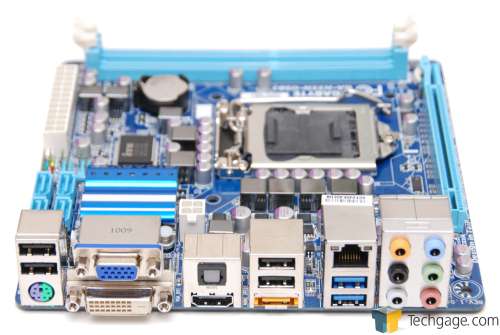 Because I received a pre-release version of the board, I didn’t receive any accessories. But I’ve been told that the retail board includes the manual (board and “Smart6”), driver DVD-ROM, the back I/O port and also two SATA cables.

It shouldn’t be too surprising what’s capable nowadays with technology, but being that this was the first mini-ITX board I’ve ever dealt with, I was impressed with the H55N-USB3 before I ever installed it into our testing chassis. It’s small, full-featured, and if you want… can handle Intel’s top-end Core i7 Lynnfield quad-core. “Packs a punch” seems more appropriate now than ever.