For the sake of CPU stress-testing, we use LinX. Compared to other popular CPU stress-testers, LinX’s tests are far more gruelling, and proof of that is seen by the fact that it manages to heat the CPU up to 20°C hotter than competing applications, like SP2004. Also, LinX is just as effective on AMD processors. Generally, if the CPU survives the first half-hour of this stress, there’s a good chance that it’s mostly stable, but I strive for a 12 hour stress as long as time permits.

When I first received this board, I didn’t have to think too long before deciding not to overclock it. The reason was simply because most people don’t purchase mini-ITX boards with overclocking in mind, and I’d be quite surprised if even 0.5% of people who purchased such boards did that. But at the GO OC event two weekend’s ago, there was apparently a PC set up with this exact board and the CPU running at 4GHz.

Well, it was decided… I’d be overclocking this thing. Due to time though, I only managed to overclock a single CPU – the one used for testing – and even after being done, I’m still not quite satisfied. I felt like I could go much further, but with other pressing requirements, I had to stop and tackle other things. I did manage to get 4 hours LinX stable out of a nice clock, though: 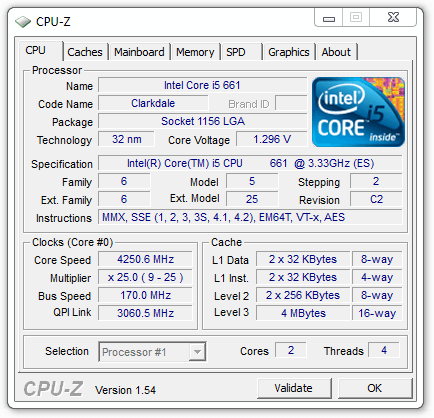 As the Core i5-661 is 3.33GHz at stock, a 4.25GHz overclock isn’t that impressive. But, the fact that this board handled it like it was nothing impressed me, because once again, this is just a mini-ITX motherboard. You could fit almost three of these boards into a single ATX motherboard, and with results like these, you’re sure not giving up much.

The board includes 6 phases dedicated to the CPU, so I have no doubt that the board could handle a 4GHz overclock for any LGA1156 processor, as long as for some reason you won’t have to increase the voltage a great deal. Fortunately today, that’s rarely a requirement, and as the screenshot shows, I was using a safe 1.3v. With more tweaking, that might have even been able to be lowered a bit.

I still can’t imagine too many people wanting to overclock on this motherboard, unless as outlined in the intro, it’s to be used or a gaming PC. But, the fact that the ability is there is nice, and if you do want to OC for the sake of say, video encoding, the board will let you. If you’re using this board in a small chassis though, like those that it’s designed for, I highly recommend you be careful with your overclocks. Smaller chassis mean increased heat, so bear that in mind.