When we took MSI’s Z77A-GD55 board for a spin last month, we ultimately ended up awarding it an Editor’s Choice award for its overall value. With GIGABYTE’s Z77X-UD5H, we’ve reached the same conclusion – it costs $15 more, but packs on more of what a lot of people will find important. That includes extra SATA ports, USB 3.0 ports at the back, five 4-pin fan headers and some extra display ports.

In talking to a couple of people recently, I’ve come to realize that a lot of people aren’t finding 6 SATA ports to be sufficient – at least not since we’ve become engulfed in data. Games and movies take up a ton of space, and so can music and documents. It might not be that you want 10TB of storage in your rig, but you might want to take advantage of extra hard drives that are doing little but sitting in a drawer. Simply put, eight ports on a sub-$200 board is quite attractive, and GIGABYTE managed to even go one step further by offering a ninth at the bottom.

Another perk GIGABYTE’s board offers is dual-LAN, and though only one is Intel, it’s nice to have the option to use a second one if the need arises. This is especially useful if your router has run out of ports but there’s another device (such as a console) within PC range that you can connect to it. 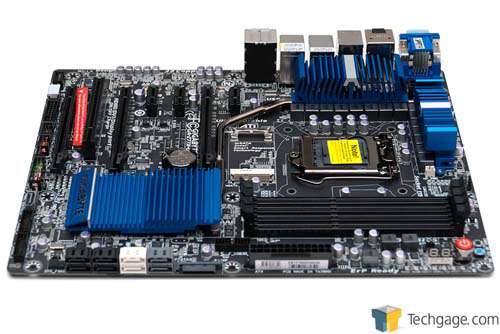 It’s nice that the board also offers the mSATA option, but I’m really not sure how important that is. With GIGABYTE’s implementation, all you can use this connection for is an mSATA SSD. By contrast, ASUS offers an mSATA expansion option on some of its Z77 motherboards that allow you to connect something other than an SSD there, like a WiFi card. Is there some huge demand for an mSATA slot for storage I’m not seeing?

Though I didn’t talk about it before, one area I wish GIGABYTE would improve is with its bundled software. EasyTune is its most popular offering, used for overclocking. This software offers three OC profiles that lazy people can simply click and apply. The only thing worthwhile here were the second and third, and neither of these were stable during a Cinebench run. I achieved 4.5GHz manually in the EFI, but somehow this software couldn’t give me 4.2GHz. Aside from that, the software is simply not as polished as what ASUS delivers… there’s just no comparison. Hardware of course always comes first, but we’re in a time where software is nice to have as well… software that people actually want to use.

Those complaints aside, other board niceties include on-board overclocking-related buttons (though I still wish the CMOS clear was at the back), and a BIOS LED read-out, which to me is very important. Though it seems a little overkill to me, the board also includes a staggering 3x USB 3.0 internal headers, and thanks to the included front panel, you’ll be able to take advantage of one of them right away.

One of my favorite features of the Z77X-UD5H is that it includes not four, but five 4-pin fan connectors. GIGABYTE’s EFI fan support isn’t as robust as ASUS’ latest implementations (which likely has other vendors wishing they thought it up first), but it’s suitable if you’re just looking for simple control.

Given its price-point, I think GIGABYTE has crafted itself a fine board here. It packs a lot in where it counts, and though it also packs in a couple of things I find a bit needless (extra USB 3.0 headers and mSATA), it doesn’t seem to have affected the price too much. This marks only the second <$180 Z77 board I’ve taken a look at, but I’d recommend it without hesitation. I still believe MSI’s Z77A-GD55 to be a great choice for its $165 price-tag, but the extra $15 for GIGABYTE’s does provide you with a fair bit of extra flexibility.