Google Reader is dead, and you’re bummed. Trust me, I feel you. However, there’s no reason to be upset, because there are a number of alternatives that have what it takes to help you forget all about Google’s ROI failure. We singled out the four best-of-the-best for Android and iOS, so let’s check them out.

With Google’s announced plans to close its Reader service on July 1st, I decided to spend some time seeking out alternatives (a total contrast to my usual move of waiting until the last minute). After spending a little too much time scouring the Web, I settled on four aggregators that I consider to be top-rate – and best of all, each one is free (some do monetize, but all are subtle).

Four may be a modest number for a round-up, but that’s truly all I could settle on. Had I chose more, I would have been suggesting apps that didn’t draw me in and simply didn’t seem to offer as polished an experience as the others. That said, for those that are not happy with any of these choices, I have some Web-only bonus mentions at the end of the article.

Before checking out each reader, let’s first take a quick look at liberating your data from Google Reader, either for archival purposes or to import into another aggregator.

Exporting Your Feed from Google Reader

Some news aggregators have the ability to import feeds directly from your Google Reader account, but for those that don’t, you’ll want to take advantage of Google’s “Takeout” service. You may want to do this anyway just to have a copy of your feed list locally.

Years ago, Google allowed you to simply export an OPML-based XML feed from within Reader’s settings, but it seems that ability has since been deprecated in favor of Takeout. To save you time and effort, you can go straight to the respective Takeout here. You will see a report like this: 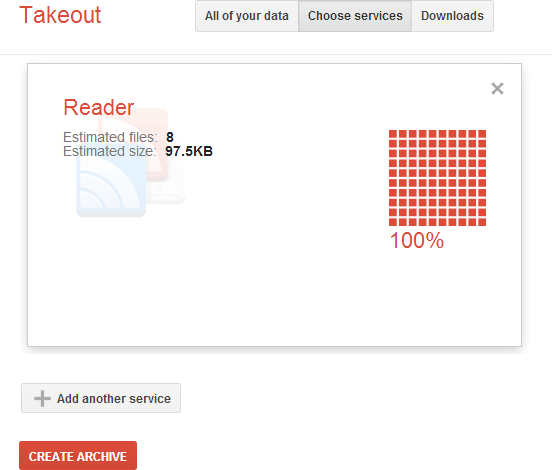 After clicking “Create Archive”, you’ll be brought to a page that will allow you to download it. Once snatched and extracted, you’ll see this as a result: 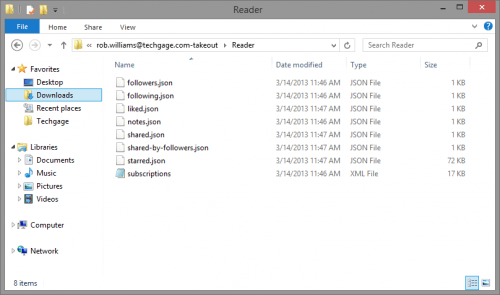 These files include your entire Google Reader history – not the posts themselves, but your likes, shares, stars and so on. As you can see, I took advantage of none of those features, so my overall archive is extremely small. The most important file of this bunch is “subscriptions.xml”, the feed list. This can be used for importing your feed list into any reader which supports OPML – and if it allows importing at all, it undoubtedly accepts OPML.

Without a doubt, the #1 aggregator I’ve seen recommended around the Web since the announcement of Reader’s demise has been “Feedly”. It didn’t take me too long to figure out why. This is very likely to become my preferred reader for the foreseeable future. 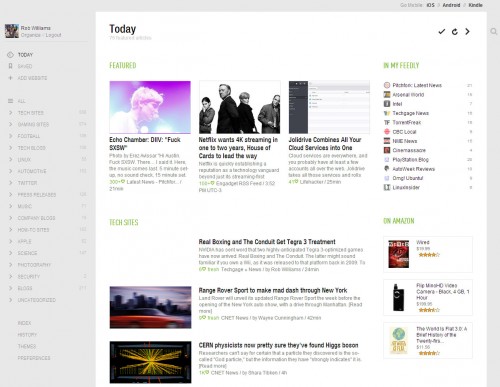 Feedly takes care of the #1 reason I stuck with Reader for so long: it’s available for both the desktop and mobile, and syncs fast between them. You can peruse feeds on your phone, save them for later, and then hop on your desktop and have quick access to them. The interoperability in my initial experience has been fantastic, and to top it all off, it looks good, too. You can see the Web-based client above, and a couple of shots from the Android app below: 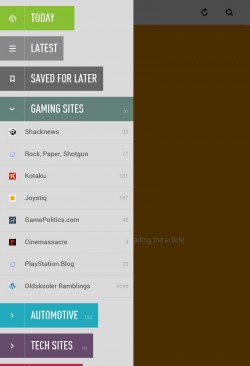 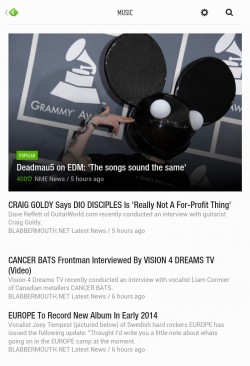 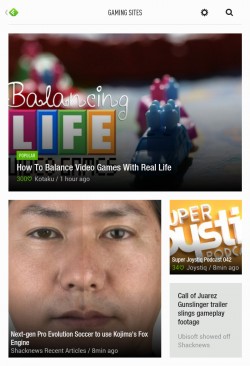 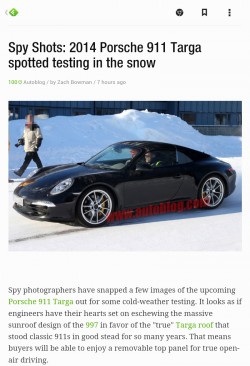 At this point in time, the only way to import feeds into Feedly is by using Google Reader – OPML is out. However, the developers have stated that a custom API will be released in the near-future, so hopefully that will also bring the addition of manual imports.

If you do import with Reader, you can expect the process to be mind-blowingly simple. If you’re already logged into Reader on your mobile device, all you need to do is give Feedly permission and within seconds you’ll be able to peruse all of your feeds.

I believe Feedly to the best possible alternative to Google Reader, however, there is one glaring omission: there’s no proper “list” function in the mobile app. Via Feedly’s website, I am able to make my feeds look just like they did on Google Reader in list form, but for some reason that is simply not an option with the mobile app – odd, to say the least.

Both Google Currents and Flipboard have a lot in common. Neither have a Web-based client, and both aim to be a “social magazine”. However, while at first I didn’t expect Flipboard to be a great choice as an RSS reader, I was quickly proven wrong. This is easily the most beautiful and most intuitive reader of this entire bunch.

Flipboard is called a social magazine because it’s designed to integrate all of your social media accounts to allow you to keep up on everything from just a single app. Need to import Google Reader? You can do that. Twitter? Facebook? Google+? LinkedIn? Instagram? Flickr? Yes to all of those, and to yes to many more. 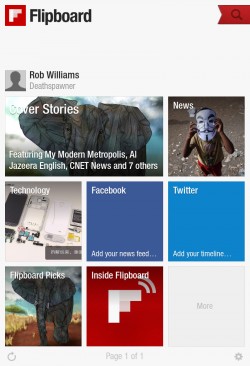 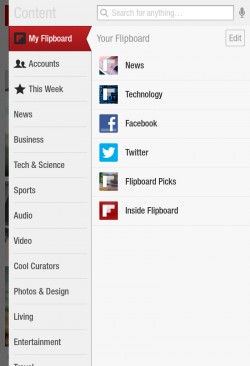 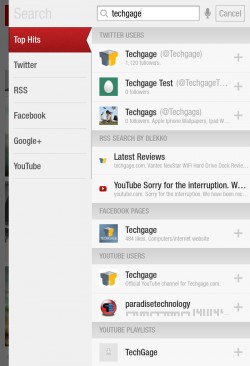 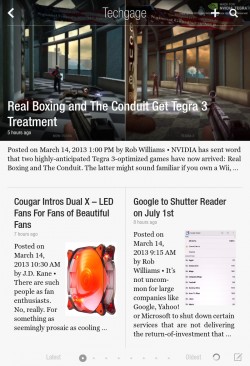 Because I didn’t feel like importing my Google Reader feed (both Pulse and Flipboard require you to enter your password, unlike Currents and Feedly), I searched for Techgage, and sure enough, numerous results came up from a variety of sources. I added our Facebook source, and the result can be seen in the bottom-right photo above. It sure does a great job of making our simple news look gorgeous, doesn’t it?

There are a couple of other benefits. Clicking on the story will bring you to the actual site, and no time is wasted if you want to read more than one story. Once you flip to the right, the next story on our website will be immediately available. It’s very seamless. One slight annoyance though – if you are zoomed-in to read text easier, it’s a little difficult to move the page around without the app thinking you’re trying to flip the page. I’m sure there’s a way to program yourself to do this properly each and every time, but there’s a definite learning-curve.

If Flipboard happened to have a Web-based client, this would without question be my preferred news reader.

Currents is an interesting beast, and likely one of the main reasons Google has no qualm about shutting Reader down. It essentially combines an RSS reader with a “social magazine” app, so it’s designed to be a one-stop shop for all of your feed needs. It offers nice transitions between stories, and is organized in a clean, modern way. A downside, though, is that RSS plays second-fiddle to Currents’ goals. Your feeds will be relegated to the “Feeds” section, and only one can be viewed at a time (rather than entire categories).

Here are a couple of screenshots: 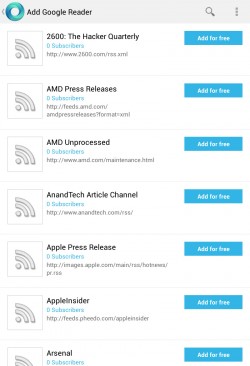 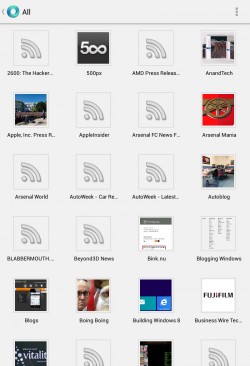 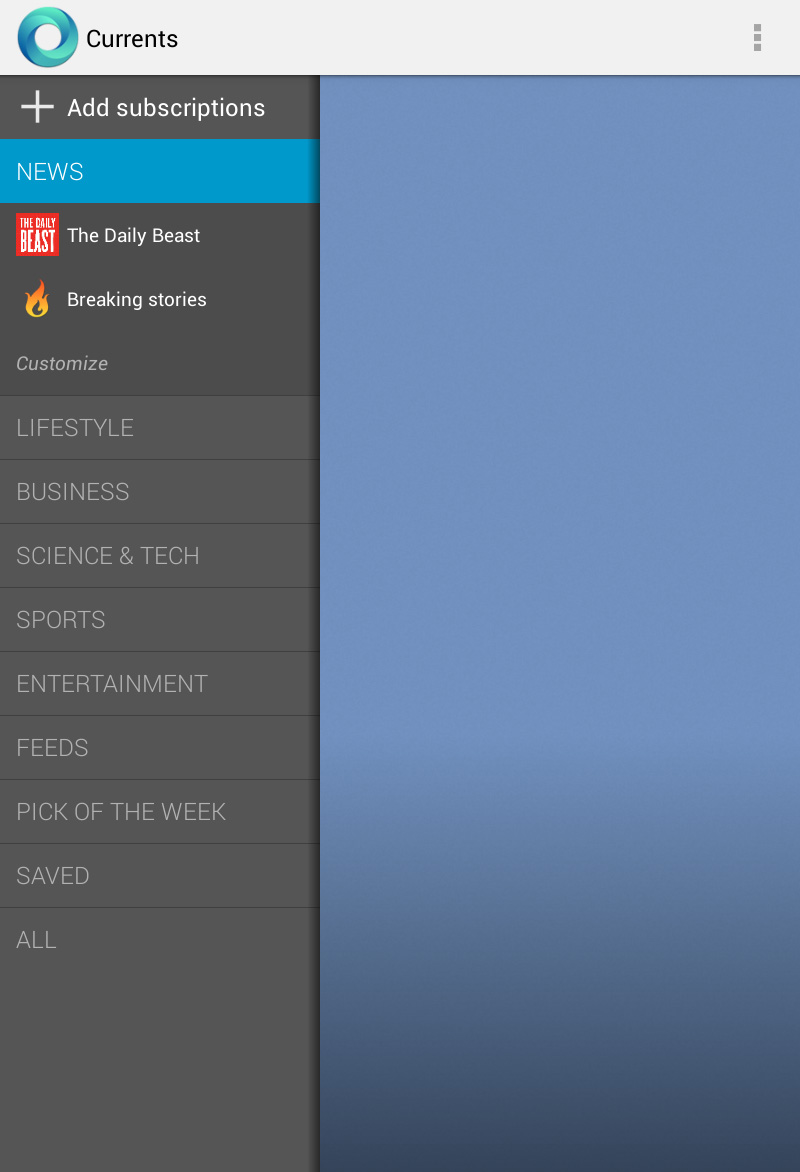 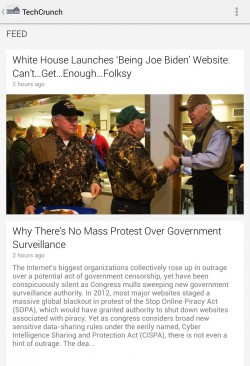 Not surprisingly, you’re able to import your feeds from Google Reader no problem, however if you have a large collection, be prepared for some ridiculous tedium. For whatever reason, you’re unable to add the entire slew of feeds at once, but instead must click to add each and every one individually. Come on, Google – really?

Currents lacks certain niceties that some Reader fans enjoyed, such as the ability to “Star” or “Like” – or even “Mark as Read”. However, for those who don’t care about the extras and simply want to read individual feeds along with “social magazines”, Currents is well-worth checking out.

When Pulse first launched a couple of years ago, it immediately caught my eye for its great design and good-looks, and when I thought I wanted a break from Reader, I even used it for a couple of months. Today, the reader confirmed to me once again that it’s a great contender. 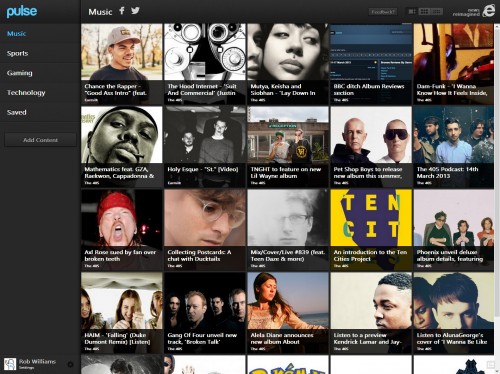 In addition to being available for Android and iOS, Pulse can also be used through a Web browser, making this a great package for those, like me, who need that interoperability. Like the rest, Pulse allows you to import your Google Reader feed, however it does so here in a less-than-elegant manner – you need to manually type in your account details rather than simply import your Google Reader account. 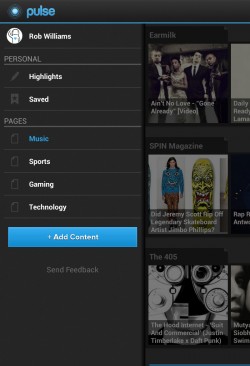 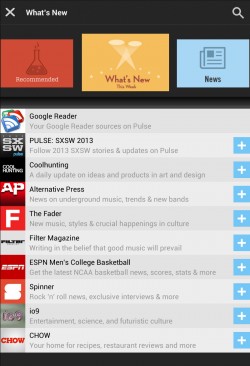 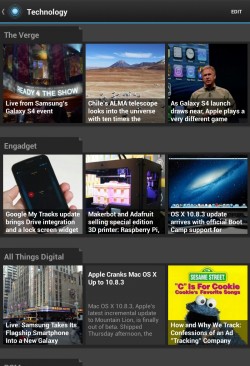 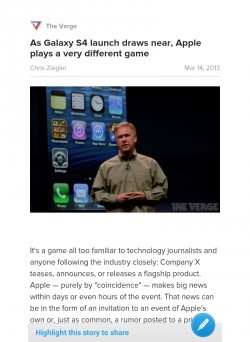 For those that happen to love the default design, Pulse is a fantastic reader. But its biggest downfall becomes evident when you want to do a little customization. To be frank, there’s quite literally none – outside of fiddling with your feeds. There’s a single view, both on mobile and the desktop, which I find a bit strange. Feedly might lack a proper list option on the mobile side, but it offers a great amount of flexibility otherwise.

That said, for some, nothing is sweeter than simplicity. So if you like the looks of Pulse, waste no time in giving it a download.

Because I had no interest in using a reader that didn’t have a mobile variant, there were some good ones that I didn’t test. However, in perusing the Web for the alternatives I did test, there were some names that I saw over, and over, and over. The two I saw mentioned the most were NewsBlur and NetVibes, though The Old Reader didn’t come too far behind. In fact, for those who enjoyed the old-school style of Google Reader, that’s essentially what The Older Reader is.

Here’s another suggestion: Twitter. At first, that might sound ridiculous, but because Twitter can allow you to sort your subscriptions with labels, you can easily divide your followees with categories. Of course, Twitter does have the extra banter that a regular feed doesn’t, but it’s still an option to consider.