The time… has finally come. Episode 2 has been elusive, but it’s here, and its brought a team. We are not going to touch TF2 or Portal though… we are more interested in going back to where we left off sixteen months ago…

When we reviewed Episode 1 some sixteen months ago, we had no idea it was going to be such a wait before we could continue along in the adventure. In fact, most people expected a new episode within 6 – 8 months, but that came and went. Some blame the development of Portal and Team Fortress 2 as being the causes for delay, and I’m right there with them. However, what’s important is this…

The wait was worth it.

Valve, being the bundle-loving developers they are, decided to release a large bundle with the launch of Episode 2, called Orange Box. This happens to be one of the best deals in gaming with Half-Life 2, Episode 1, Episode 2, Portal and Team Fortress 2 all included for the price of a normal game on the store shelves. If you own Half-Life 2 and Episode 1 already, it’s still a worthy purchase, but if you have absolutely no interest in Portal or TF2, you can purchase Episode 2 separately on Steam. But it goes without saying… if you’ve never played Half-Life 2 before, this bundle is an incredible value, simply because Half-Life 2 is an incredible game.

But in our quick review, we are going to focus on Episode 2, because -this- is the game we’ve been waiting so long to play. One humorous thing about the game though, is that Valve had released so many assets over the past year, it almost felt as though we played through most of the game already, far before ever touching it. The good thing though, is that Valve does not disappoint, and after beating Episode 2, you will understand that despite all those teasers, they were only moderate samples used to whet all of our appetites. Like previous HL2 installments, you will feel compelled to play through Episode 2 more than once, which proves that those teasers did absolutely nothing to hurt the games appeal. 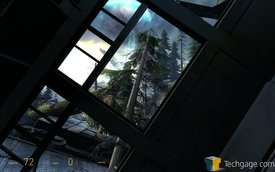 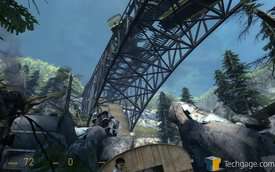 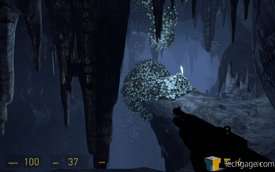 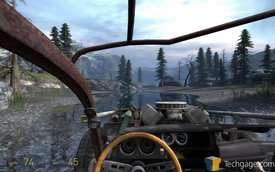 Another point of interest is the Episode 2 also marks the first appearance of Half-Life 2 on current-gen consoles, namely the Xbox 360 and Playstation 3, although the latter will be arriving next month. So even if you don’t have a PC, you can still enjoy Valve’s masterpieces.

Episode Two begins where Episode One left off, right outside of City 17 in the wilderness. You will notice right away that the visuals have been amped up in some respects, which proves even further how flexible the Source engine is. When it comes to Episode Two, it doesn’t even matter that it’s an upgraded three-year-old engine. The game is gorgeous, regardless of how you look at it. Unless you are completely gung-ho about finishing the game as fast as possible, you will no doubt stop along the way to just observe the beautiful levels.

If there is one feature that stands out in Episode Two, it’s the fact that questions are finally getting answered, and Freeman continues to grow closer towards Alyx. That in effect means you will grow closer with her, and when a game can invoke any emotions at all, it’s a damn good game. Episode One had some of this, but some of the storyline in Episode Two emphasizes these emotions even further. 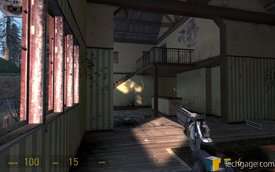 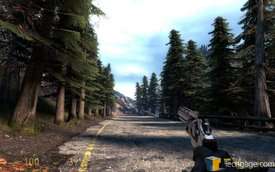 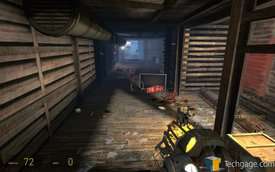 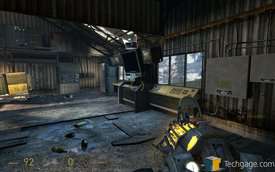 Other various upgrades include physics and the ability for the game to use more than one CPU core, if you have a Dual-Core or Quad-Core processor. Equipped with a 2.4GHz E6600, I logged the CPU usage during the entire game, and surprisingly enough, at any given time, the Core 1 was at 100% and at various intervals, the other core would get in on the action as well. So, this might be another game to add to the list that runs better on a multi-core processor.

It’s great to see that Valve continually upgrades the Source engine to compliment our newer hardware. It’s just too bad that these upgrades aren’t back-ported to the original games, because there are some incredibly cool effects throughout.

As for gameplay, Episode Two keeps a great pace and proves to be a rush until the end. There are numerous battles throughout the game that can prove to be quite a challenge. Some of the boss-ier battles are well coordinated, and some you may need to try over.. and over. When done though, you really feel like you accomplished something.

There are no new weapons with this release, but it doesn’t even matter… the weapons that are there work, and are fun to use. They work so well that I am not even sure I’d want to see a new weapon, but in some ways, it would still be nice to see for the sake of keeping things interesting and fresh. 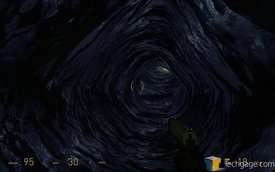 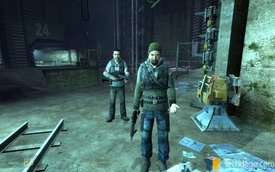 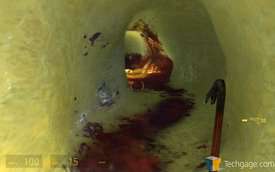 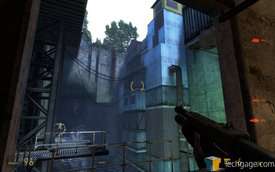 Recognizable monsters return, including the beloved Antlion. Alright, so those are more annoying than a sibling who just tripped over a controller cord and hauled your console off the TV stand, but it’s just one of those things that you can’t get that mad at. Mini-Striders, called Hunters are introduced here, which you’ve no doubt seen in a few of the trailers. These guys are very difficult, and very smart. If you try to hide on them, they will do what they can to get to you, which effectively helps scare the life out of you if you are low on health. In my case, this was quite often.

When reviewing a game, one thing I try to avoid is giving a game a higher-than-deserved rating. I gave Episode 1 a 94%, which to me is an outstanding result. After playing through Episode Two, I realize how much better Episode One could have been. Not only with gameplay, but with story as well. With all of that said, I am awarding Episode Two a 95%. It’s an outstanding experience from beginning to end, and is not a game you are going to beat and set aside right away. Without question, if you are a fan of the Half-Life 2 saga, Episode Two is a no-brainer. If you’ve never had the opportunity to play the series, then there are no excuses to not try it now, as it’s available for both current-gen consoles as well.

After clearing Episode Two, an obvious question arises. When will we see Episode Three?