To make sure that a game has the best chance of flying off the shelves, some game developers strive to deliver a unique gameplay experience, a compelling storyline, and a robust multi-player mode. With Hard Reset, developer Flying Wild Hog shunned those ideas, instead focusing on a single-player experience that is about as action-packed as it gets.

Hard Reset is the kind of game that can relieve tension. After a rough day at work, what better way to unwind than to blow things up? Story doesn’t matter in cases like these, and it’s a good thing… the one found here is boring. In fact, it’s the real-world story behind the company and the game’s development that’s interesting.

Flying Wild Hog is a Polish developer comprised of people from three different companies; People Can Fly (Painkiller and Bulletstorm), CD Projekt Red (The Witcher) and City Interactive (Sniper: Ghost Warrior). Development-wise the game is interesting because no one heard of it until just this past summer. The progression moving from first hearing of the game to actually being able to play it was refreshingly minimal.

Hard Reset takes place in a cyberpunk-themed world sometime in the future, where machines are working to take over the city of Bezoar. Your goal, as army vet Mr. Fletcher, is to do whatever it takes to figure out who started this mess, and then put a halt to things.

That about sums things up. I’m unsure if the developers were simply disinterested in producing a compelling story or if it was made simple on purpose, but given the noir comic book style cutscenes that barely inform you about anything other than what you need to do next, I’m willing to bet that it’s the latter.

Not every game needs a deep story, however, and not everyone even wants one.Serious Sam has never had the best of stories, and it’s obvious that’s a title where Hard Reset gets some of its inspiration from. The game has not a lick of humor throughout, but the run-and-gun gameplay you’ll be experiencing will definitely remind you of the game that inspired it -seriously. 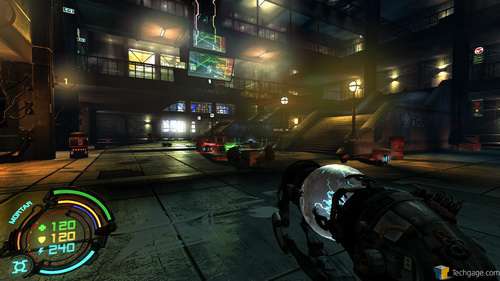 Unlike Serious Sam though, Hard Reset’s first level almost looks like its last. There’s little differentiation in textures or even enemies, but given the fact that this is a five-hour game, it almost doesn’t even matter. If you’re a fan of cyberpunk themes, like those found in Deus Ex (read our review of DE: Human Revolution), Dystopia, Anachronox among others, you’re likely to love the sights and sounds here.

While it’s clear that the developers of Hard Reset didn’t strive to deliver the most unique game on the planet, there are a couple of things about it that stand out. The first is the fact that there are just two weapons in the game; a standard gun with regular ammo and also an energy gun. Well, calling it “two weapons” is a little unfair – so let me explain.

In their innate state, the real ammo gun acts as a rifle, and the energy gun as a plasma rifle. With N.A.N.O. currency picked up throughout the game, you’ll be able to purchase both upgrades to the current gun-type you are using, along with upgrades for that particular type. For example, you can extend your plasma rifle to become a “shock blaster”, which is in essence unhinged electricity bursting forward. An upgrade to that weapon is the ability to paralyze enemies that are hit with it. 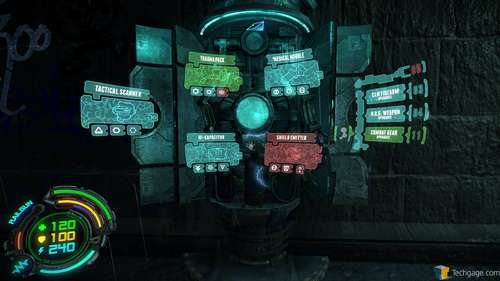 While it looks like there are only two guns in the game, there are in fact five of each, for ten in total. Then there are three upgrades to be purchased for each of those ten, upping the variety quite significantly. Some might not like the idea that ten weapons are skinned as two, but in a way it’s a little convenient; “Q” equips the real gun and “E” the plasma gun, then 1 – 5 for each of their respective types.

The other benefit is that there are just two ammo types, so you never need to worry about picking up a certain type. More powerful weapons consume more ammo per shot, as we’d expect. Running out of ammo isn’t something that will happen too often, as it drops everywhere. Blue ammo fills up the plasma gun while red takes care of the regular gun. Blue and red cubes that drop will fill up both guns in full. There wasn’t a single instance in the game where I ran out of ammo on both guns.