Taking a peek at the interior of the Anubis, one thing we notice is that it’s rather open, and coming off one of our last chassis reviews, the Silverstone KL01, the added room afforded by the Anubis is appreciated.

Glancing at the features, we should point out that the motherboard tray is not removable and sadly a plain silver color, completely standing out from an otherwise brilliantly black interior. Accommodating ATX and micro ATX motherboards, the Anubis comes with etched standoff placement holes making installation a breeze. Motherboard tray aside, the rest of the interior is the flat black as the rest of the case, making the overall appearance once the motherboard is installed top notch. 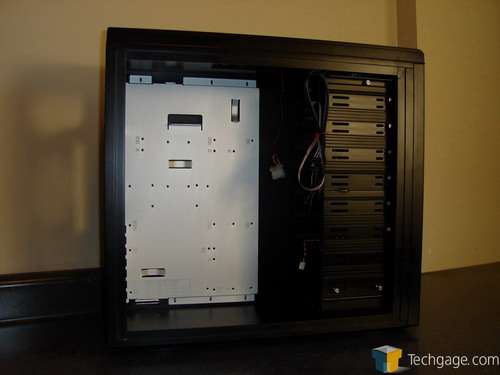 Another nice feature of the Anubis is its removable hard drive cage. While not revolutionary, a nice bit about it is that it can be front loaded making the process of swapping out a hard drive, or simply adding additional storage a snap. This is nice if your anything like me and install the motherboard into the machine first. I don’t often think of placing the drives in first and if you don’t, it can come back and bite you, but in the Anubis’ case, pun intended, this is a non issue.

Able to accommodate up to four drives, the Anubis and its lone drive cage might not be enough for some most enthusiasts but more a vast majority will prove to be more than enough. While the case itself lacks a front mounted fan, once can be installed, and was installed for the photographs, the hard drive cage allows us to properly route our fan’s cables by placing a small hole at the front to run the cable through to the motherboard. 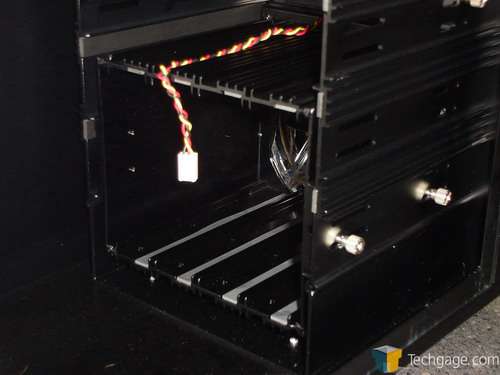 At the top of the Anubis, there is plenty of room to install virtually any sized power supply. With a small ledge on the motherboard tray, all that is needed to install a PSU is to secure it in place with four screws. While this isn’t anything special, we felt the need to point the available room out as many cases do not play will with longer power supplies often associated with the higher wattage ratings. 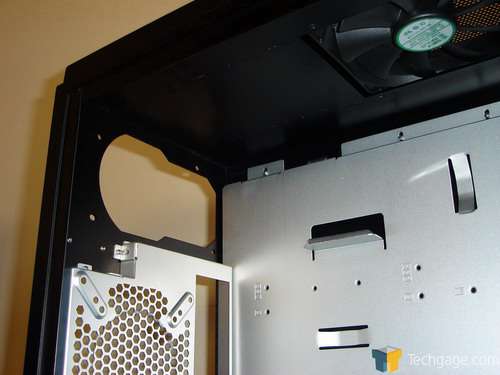 As we pointed out earlier, there are a few things that make the Anubis unique. The most obvious being the large heat sink styled top. Another unique feature is the individually numbered plaque on the back of the chassis. With these two features being exclusives to the Anubis, Hiper has show a bit of creativity in designing the case. To compliment these features, the accessories that come with each Anubis play to these features quite well.

The entire set of extras… screws, motherboard standoffs, manual, etc…, all come in a compact little bag with a zipper top. This holds everything needed to install our hardware into the Anubis as well as a few extra “surprises.” 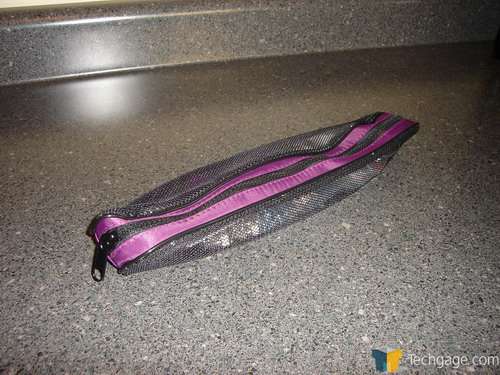 Lining up the bits and bolts, we see that Hiper has included enough screws, both regular and thumb, standoffs, and fan screws to get anyone up and going. The bags are well documented on their contents and with each one, there are a couple of extra parts should one or two come up missing down the road.

For those of you concerned with the top fins and how difficult it will be to keep them clean, Hiper is clearly a step or two ahead of you on that. Showing great foresight, Hiper has opted to include a small bristle brush to run between the fins and get any dust or crumbs that might be on the top of your case. This is another nice inclusion and should come in handy for anyone concerned with the cleanliness of their PC.

Oh, there’s also a manual included as well but honestly, who uses those? Seriously though, the manual is about as informative as a chassis manual can be. 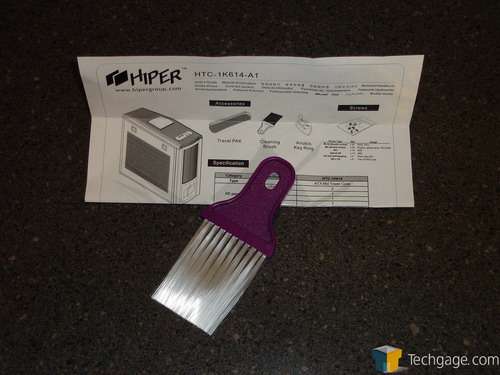 The best part of the accessories bag (yes, the brush is topped), is a rather robust Anubis key chain. 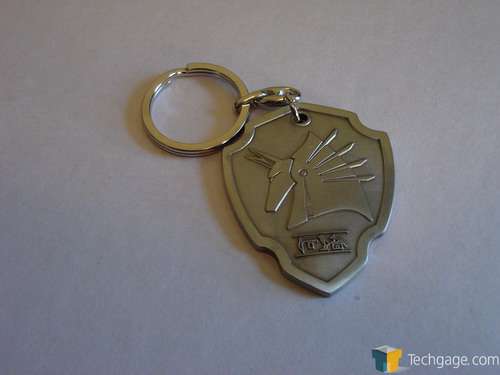 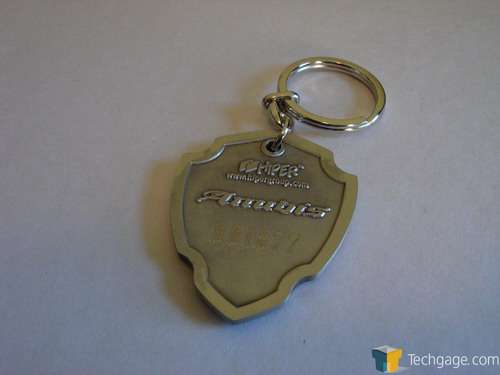 With the Egyptian God’s head on one side, the back side of the key chain reveals a laser etched number matching the number on the back of the case itself. This ensures that not only is your case one of a kind, but you can prove it with your extremely heavy, yet cool, key chain that just so happens to also have a matching number as well.