The choices are endless when looking to purchase a new notebook. Do you want something with fantastic battery-life or something powerful? Gaudy or modest? Something everyone else has, or something unique?

If you chose the latter, then a boutique is what you are looking for. But then another problem arises… the price. Most often, it would be less expensive to start up your own company to build a notebook for you, rather than pay the highly inflated prices.

Hypersonic seems to be different, however. I’ll admit that I didn’t know of the company until our friends at OCZ Technology Group took them under their wings last fall, but after taking a look at their upcoming sub-notebook, the Avenger AG2, it’s easy to see that both companies compliment each other well.

Some boutiques choose to focus on either notebooks or desktops, but Hypersonic chooses both. Right now, they offer two different series for each, but the Avenger will be the third for their notebook line-up. The Aero notebook series focuses on general computing, while the Aviator is for performance gluttons and gamers. Their Avenger series will feature high-performing sub-notebooks, for those who value performance and a smaller build more than battery-life and a larger build.

That’s no understatement. While other sub-notebooks, such as the Lenovo X300 or the Apple MacBook AIR build for better battery life, Hypersonic packs a powerful Penryn processor along with lots of RAM and a large hard drive. That’s the trade off, though. Better battery life or a faster machine? There’s no such thing as both unless you have a battery the size of the notebook itself.

Since the Avenger AG2 is not yet released, I am unsure of the exact configuration options that will be available at launch, but I was given a general idea. All sub-models of the Avenger will be 12″ units, but will feature varying CPUs, hard drives, RAM configurations, et cetera. The base model will retail for $999 and include a 1.66GHz Intel Core 2 Duo T5550 (65nm, Merom), a 120GB hard drive and Windows Vista Home Premium.

The notebook we received is upgraded in many regards. It includes a brand-new Penryn-based Intel Core 2 Duo T9300 at 2.5GHz, which includes 6MB of L2 cache and an 800MHz FSB. This upgraded unit also includes a generous 4GB of DDR2-667 memory, direct from OCZ of course, and also a Hitachi Travelstar 7K200 (7200RPM) 200GB hard drive. “High performance” is right. The only thing lacking is a robust GPU, but that’s no surprise given the lack of room in a 12″ notebook. 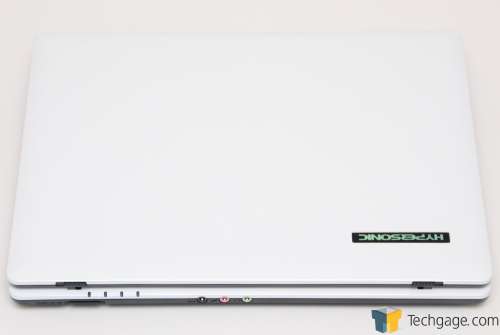 All Avenger models will feature a 12″ display capable of displaying 1280×800. Nothing astounding, but common of the price range, which is why the ASUS M51S 15.4″ notebook I took a look at a few weeks ago featured the exact same resolution, despite having a much larger screen.

As for graphics, a powerhouse cannot be pushed underneath this small frame, so Intel’s integrated Mobile 965 is used. Don’t expect to game much with it, but regular 3D applications should run fine. I mostly used Google Earth during testing and it ran incredibly well.

The notebook will be offered in white, black, blue, pink or yellow. Precisely the same colors of your eye after being sucker-punched. We can only assume that the AG2 will pack a similarly powerful punch. 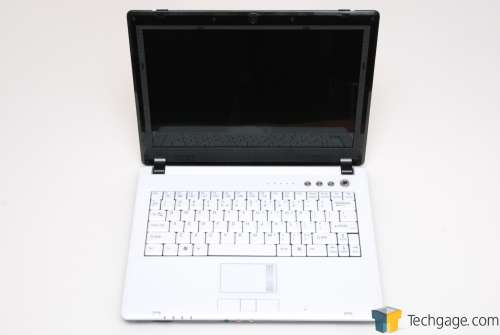 One thing you’ll immediately notice is the extremely clean look. There are no product stickers at all, as opposed to other notebooks we’ve used in the past that have applied them as if they were being discontinued. I queried Hypersonic about this, and it turns out that this is common of all their notebooks.

This is the first sub-notebook I’ve used, so I wasn’t sure what to expect. It took no time at all for me to appreciate the size, though. While I love a full-blown notebook for regular use, I have found out the hard way many times in the past that 15″ notebooks are not that ideal to do business with on the plane. Having a 12″ notebook means the person pleading blissful ignorance in front of you can push their seat back and not inconvenience you as much as it would with a larger notebook. 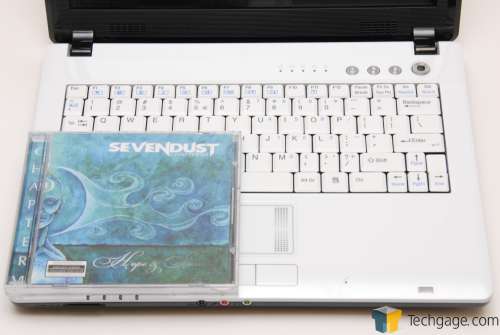 The CD in the picture can help give an idea of how large the notebook is. Moving from a full-sized offering to a 12″ one is quite the shift, although it wouldn’t seem to be. The biggest issue right off the bat for me was the keyboard, but like most things, it became a lot easier to deal with as time wore on.

On the next page we’ll take a tour and see all that the Avenger AG2 has to offer.