Before we dive into this review, I just want to let you know that while I belong to the church of ergo keyboards, and this is not an ergo keyboard, I will give it a fair chance for this reviews’ sake. And right now, I’m so frustrated with the loss of signal experienced with the Microsoft 7000 wireless keyboard that I reviewed earlier, that I’m willing to use just about anything else but that keyboard.

Ok upon first inspection – I love the USB ports on the keyboard, perfect for the HUE webcam, if you don’t mind it hitting your keyboard every ten minutes, but otherwise, cheers! You can never have too many USB ports! Sadly however, these are underpowered USB ports (up to 100mA). I’ve read some issues with these USB ports not being able to support certain devices, though I had no problem with my camera, my tiny USB device or my bendy webcam.

Before plugging it in, I sat here and toyed with it a little and immediately noticed the position of delete, insert, home, pgup pgdown, etc keys and those are very important keys for one of the games that I play. They’re there, they’re just actually integrated into the numpad, which will not work with my game, as the numpad controls the camera, while the delete, insert, home etc control your target and what you want to do with it. Thankfully there are a plethora of programmable buttons on the far left, but that’s going to really take some getting used to.

Let’s look at the features listed on the box.

The illumination is perfect for gaming in the dark, there are three colour options, red, blue and purple (which is more pink than purple) as well as different levels of brightness, Subtle, Ambient, Intense and Off. Every single key is illuminated, which helps for those who need to look at their keyboard to type. 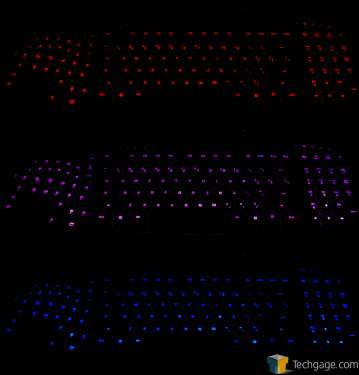 The ambient glow is quite nice in a darkened room, however every time you reboot your machine, you have to reset your colour and intensity preferences. This is quite easy to do with the two soft touch buttons at the top of the keyboard, however this is something that could have been defaulted in the software as well. For me, I prefer blue on Ambient intensity.

The “Dedicated Gaming Terrain” is completely soft touch for both superior response and quiet interaction. It’s tilted 11 degrees, which, according to the box, matches natural wrist position. That being said, that does imply that you’re using your left hand to move, shoot, jump, etc and your right hand to mouse, leaving the 15-25% of the population who are left handed, out of luck. 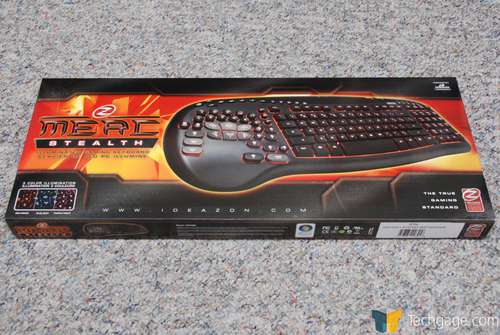 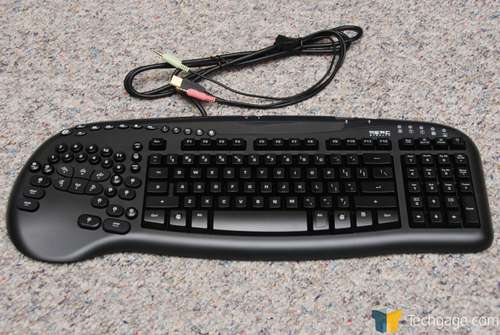 Now there are several types of gamers. Six considering both right handed and left handed players use their keyboards differently, or at least in different positions. There are those who use the mouse almost exclusively, those who navigate their games with the arrow keys and those who navigate with WADS. Pure mouse users, you aren’t going to need this keyboard much. 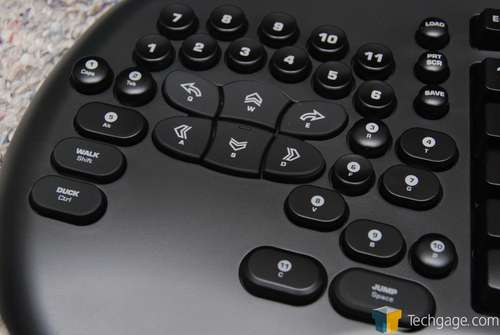 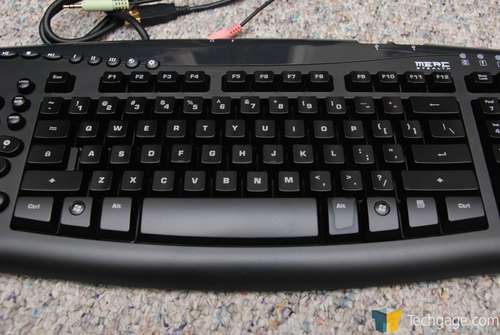 And of course, this does not appear to be available in a flipped version.

The Dedicated Gaming Terrain also has 34 gaming keys labelled and positioned for ultimate precision and control. Jump is in a good location, as are duck and printscreen (though it took me quite some time to find printscreen so I could capture onscreen images of the application!).

The 1 through 11 shortcuts are at a very good distance though I would have preferred to see a third row of directional buttons below the other two, to include strafe left and right (normally Z and C) for turn buttons (in this case Q and E) are less used, since many games make you turn your camera and therefore your character, with your mouse.