Removing the motherboard tray took a bit of effort, but once I learned the appropriate way to pull on it, I was able to get it in and out with little effort. When in place, there is a screw at the top right of the tray that prevents it from sliding out of place. My GIGABYTE motherboard is a standard ATX board so as you can see, the Ra2000 Liquid has plenty of room for extended ATX boards should you have one that you want to use. The depth also allows the use of even the longest of GPUs available today. 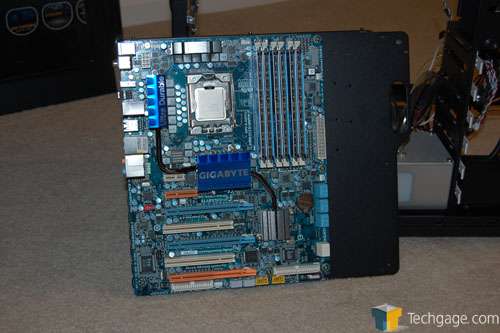 With everything installed, the board is relatively clean in appearance. The water block takes up so much less space than a standard air cooler. If it weren’t for the auxiliary power connector in the top left hand side of the only thing on the board above the GPU would be the water block and the 24 pin power cable. I can get used to this look. 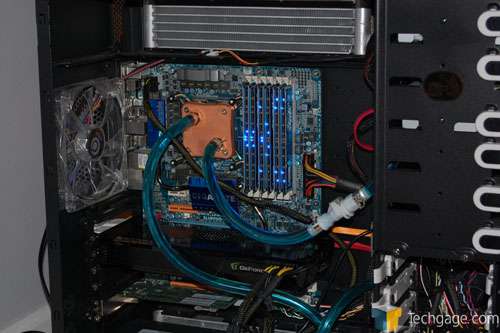 Going through the interior of the case at the beginning of the review, I mentioned that your power supply can be mounted at the top of the case or the bottom. My personal opinion is that a power supply should be at the bottom if given the chance. Because of this, I put the PSU in that location. I instantly realized that this was a poor choice with the reservoir and pump being in the location that they are.

To prove my point, I went ahead and installed the power supply on the bottom. What I ended up with was frustrating to say the least. In any build, the thing I least look forward to is the cable management. This is a horrible task that we all begin with the best of intentions but most quickly lose steam as the cable routing progresses.

I always start with the power cable and work my way out to the other bits of hardware, trying to route the cables as best as possible. With the Ra2000 Liquid, if you place the power supply at the bottom of the case, you quickly realize that you will not be able to make most of anything look good if you have any unused cables. There is roughly three inches between the back of my power supply (an average sized unit at that) and the reservoir. This leaves very little room to work with when trying to find something to do with all the unused cables. This isn’t a bad thing as you can mount your PSU at the top of the case but is something to consider when planning your next build. 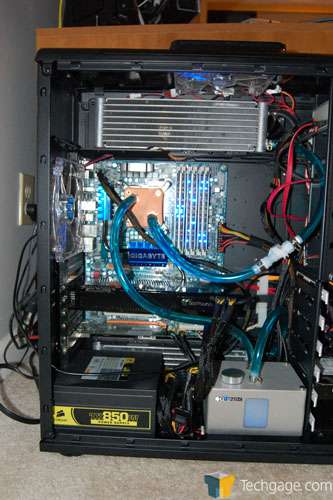 The System Intelligent Management system included in the Ra2000 Liquid is made up of the software and board that allows control of the pump and fan speeds as well as some of the lighting at the top of the case. You can communicate with the SIM console by using the provided software. When installed, and the USB cable on the board is connected, you have a good amount of control over the performance and noise of your system.

Built for all of Ikonik’s machines, you select which case you are using and the software already knows what should be present. From here you can monitor pump and fan speed and keep an eye on temperatures if you decide to use the provided temperature probes. 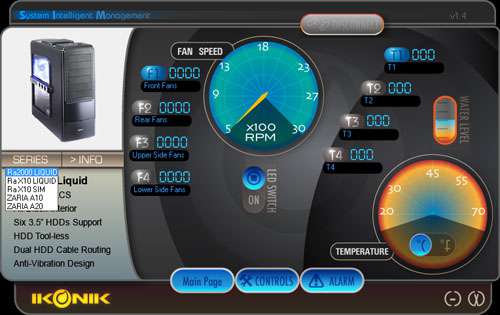 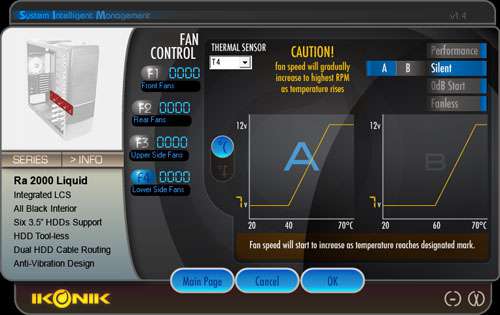 The SIM software allow the control of fan speeds by utilizing profiles. You can set individual fans, or all of them, to run silent (on but rotating slowly), topped out (performance), silent at first (0dB Start) and completely silent (fanless). I cannot ever recommend fanless, especially when you can set the pump to “fanless”, meaning it’s not moving water, but the other three certainly have their uses. When not testing, I ran the Ra2000 Liquid on Silent 24×7 without any temperature issues.

As with my Fractal Designs Define R3 review, the Ra2000 Liquid is kind of a one off for me. This review came into being more from our direct talks with Logisys at CES than anything else. Ryan is still our chassis reviewer and is far more capable than I to present a solid review of a case. For this one though, with it being an all in one water cooled case, I took this one on myself.

For testing, the ambient temperature is kept at a constant 72 degrees Fahrenheit. As in Ryan’s reviews, AIDA64 Extreme Engineer is used for monitoring and recording all system temperatures throughout the entire testing process.

Testing is run on a vanilla install of Windows 7 64-bit. An idle temperature is taken of both the CPU and GPU before stress testing begins. To load up the CPU, Intel Burn Test was used and ran for 20 minutes. For the GPU, we ran OCCT’s built-in test for 20 minutes as well. Tests were run at stock clocks, and when the i7-920 was overclocked to 3.6 GHz. When overclocked, temperatures were taken when the fans and pump set to silent and set to performance. 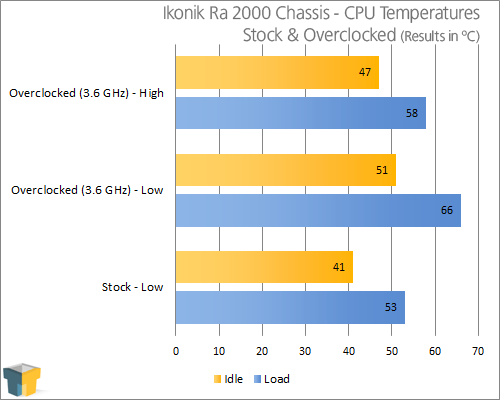 For those of you that read our Fractal Designs Define R3 review, you might recall the temperatures seen with the Arctic Cooling Freezer 7 Pro Rev 2. The Ra2000 Liquid’s water block manages to stay fairly even with the air cooler at idle, it falls slightly behind when under heavy load. When overclocked, we see higher temperatures but still well below what I could ever consider cause for alarm, even when the SIM was set to silent.