A Creative Arc By Intel: A750 & A770 GPU Workstation Performance Review

by Rob Williams on October 5, 2022 in Graphics & Displays

We recently took an in-depth look at Intel’s low-end Arc A380 graphics card in creator workloads, and now, we’re able to add the top-end A750 and A770 models to the results. We found some notable highlights of Arc with our A380 look, and as it happens, Arc 7 has created even more. 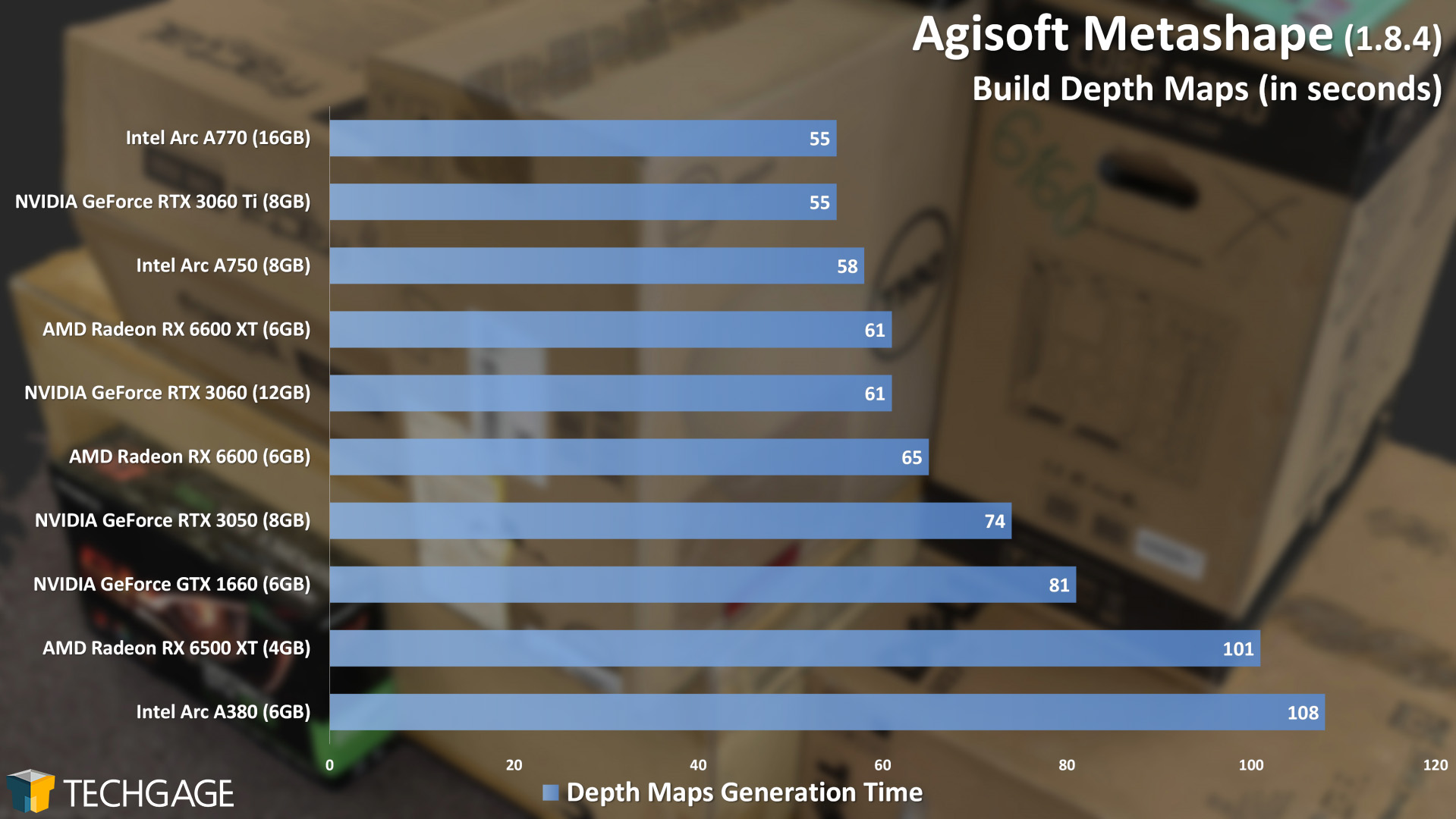 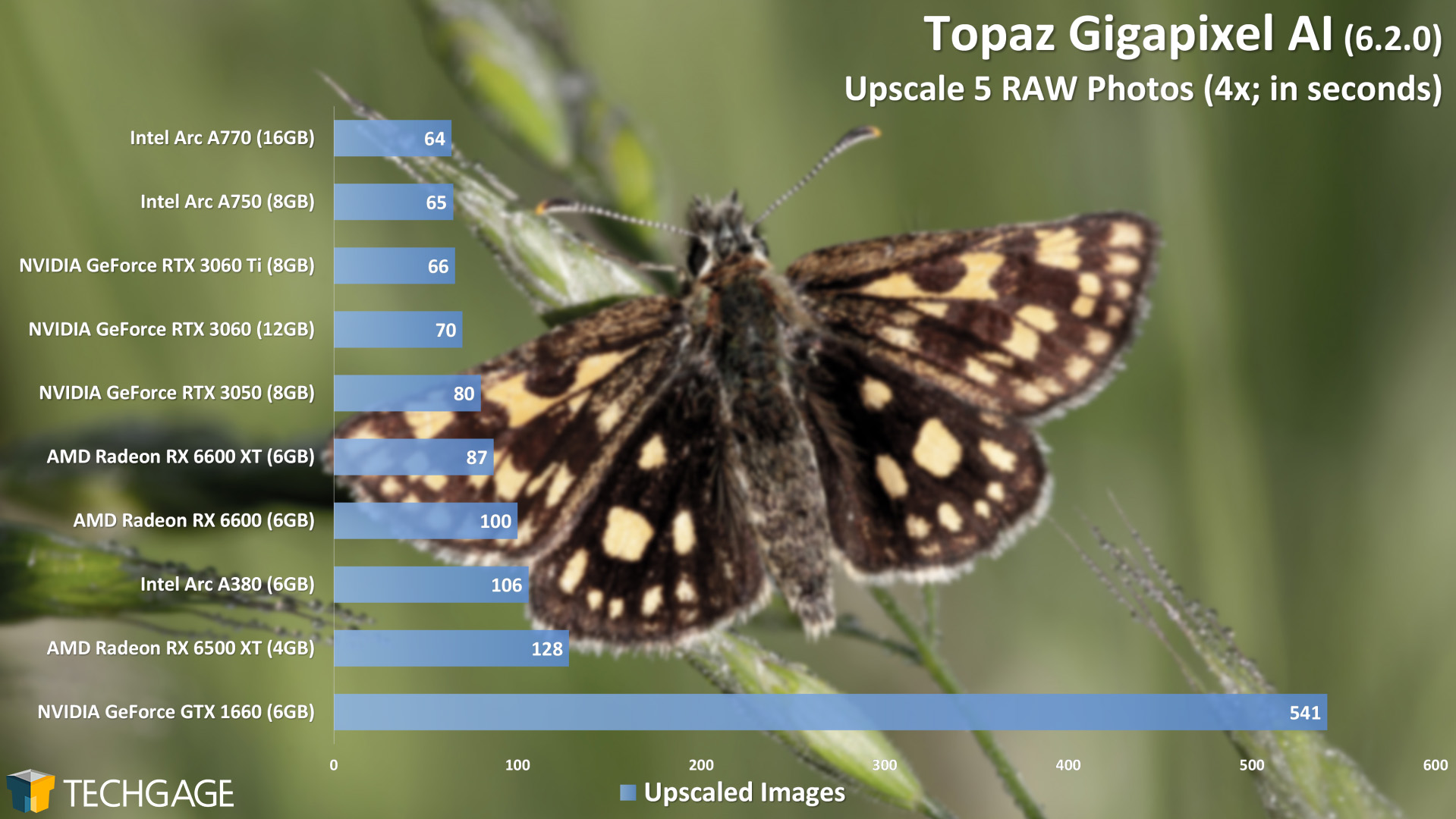 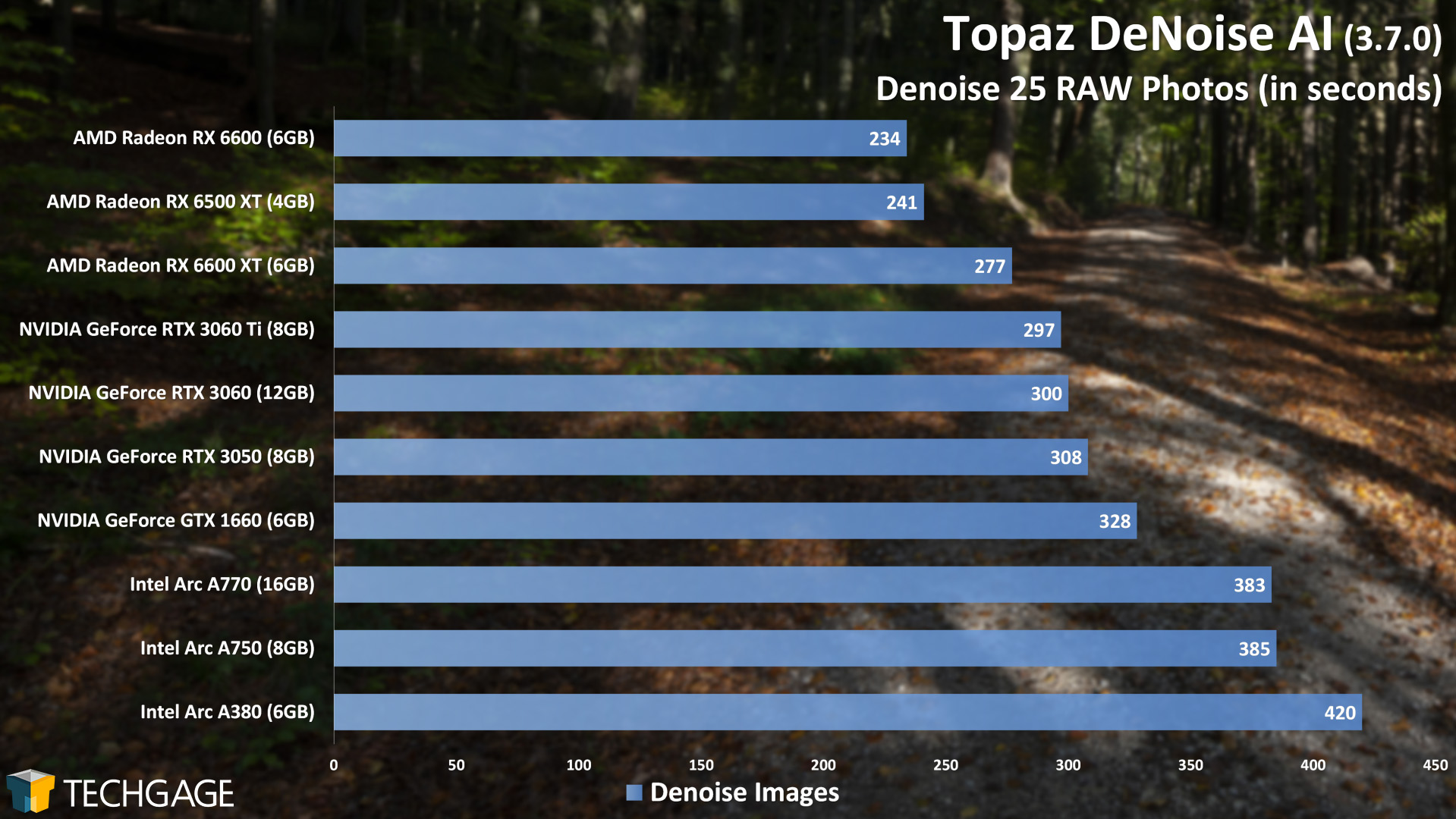 We introduced Topaz into our benchmarking with the previous Arc look, and we’re glad we did, as we were hurting for AI workloads, and these ones are easy to run. Thankfully, you don’t even need a license to test the software. We couldn’t find a single limitation – aside from the resulting output being watermarked, as you’d expect.

We’re really not sure what to make of DeNoise AI yet. This initial performance doesn’t exactly instill us with much confidence, especially as we see the RX 6600 and RX 6500 XT place ahead of the RX 6600 XT. The NVIDIA GPUs do seem to scale pretty close to what would be expected, though, as do the Arcs – although it would have been nice to see them more competitive with the others.

Gigapixel AI is much more reliable this way, with each vendor seeing correct ordering of the GPU models. This is also a test where Intel manages to strut its stuff well. It again sits at the top alongside the 3060 cards. 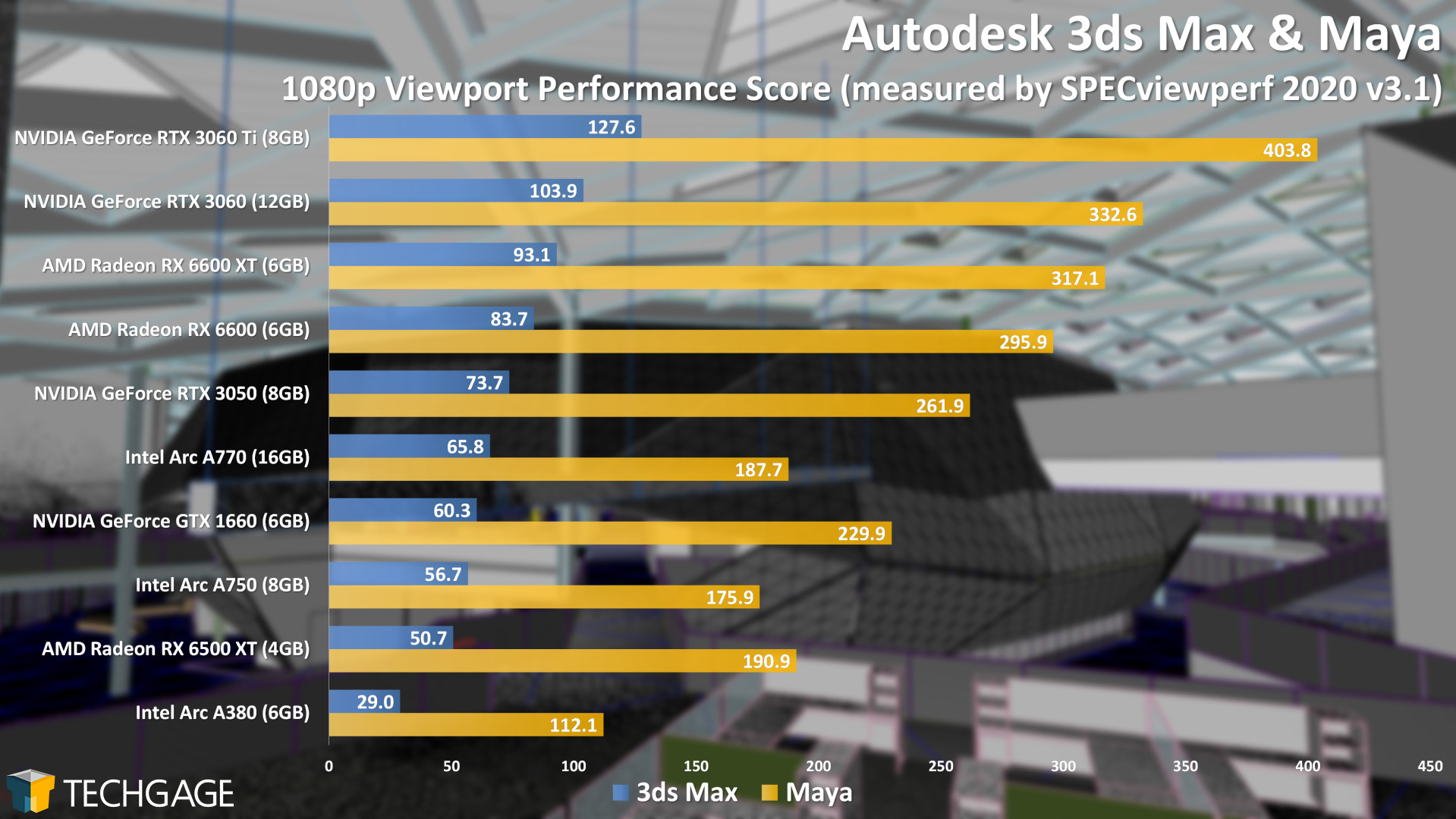 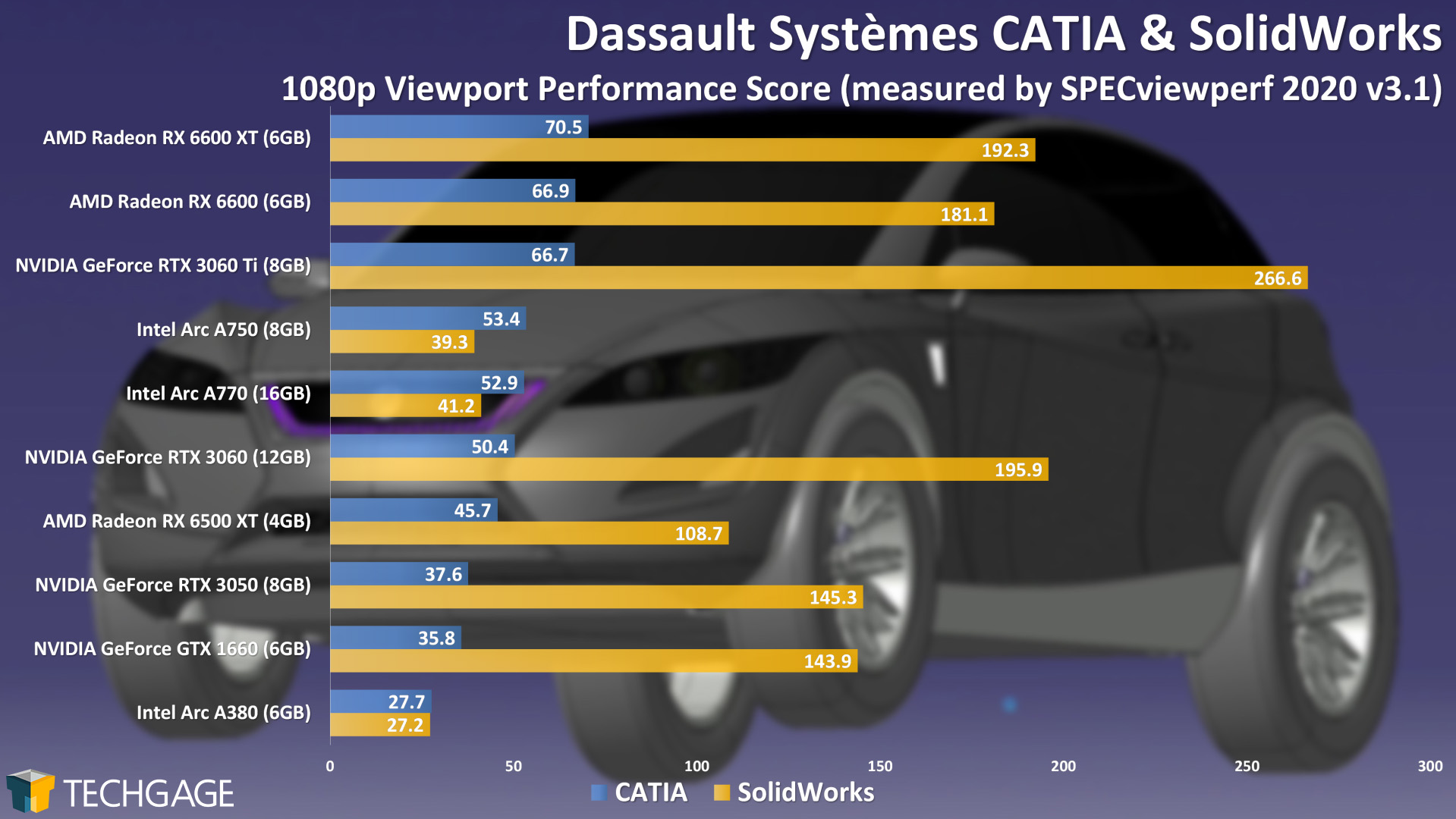 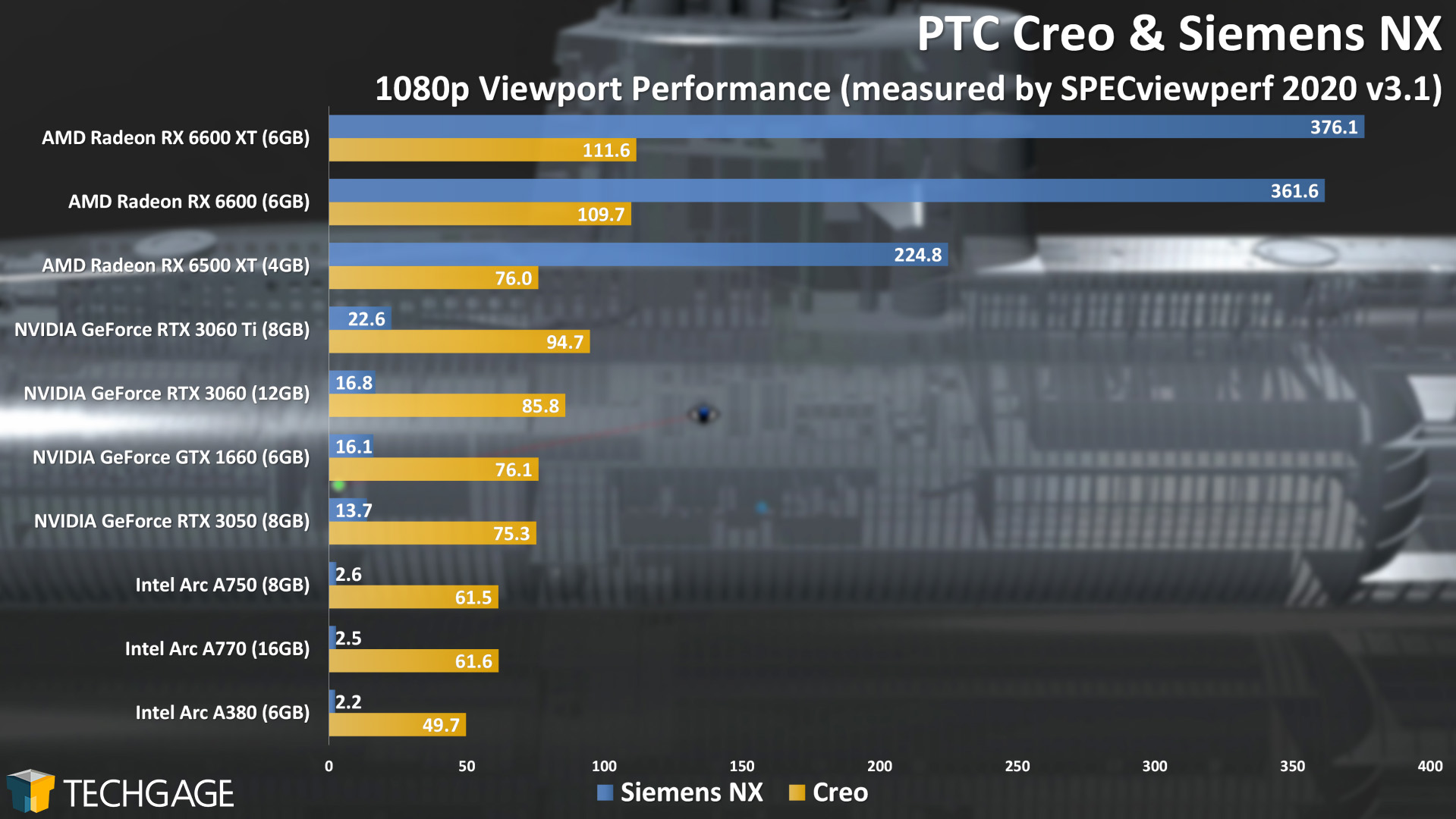 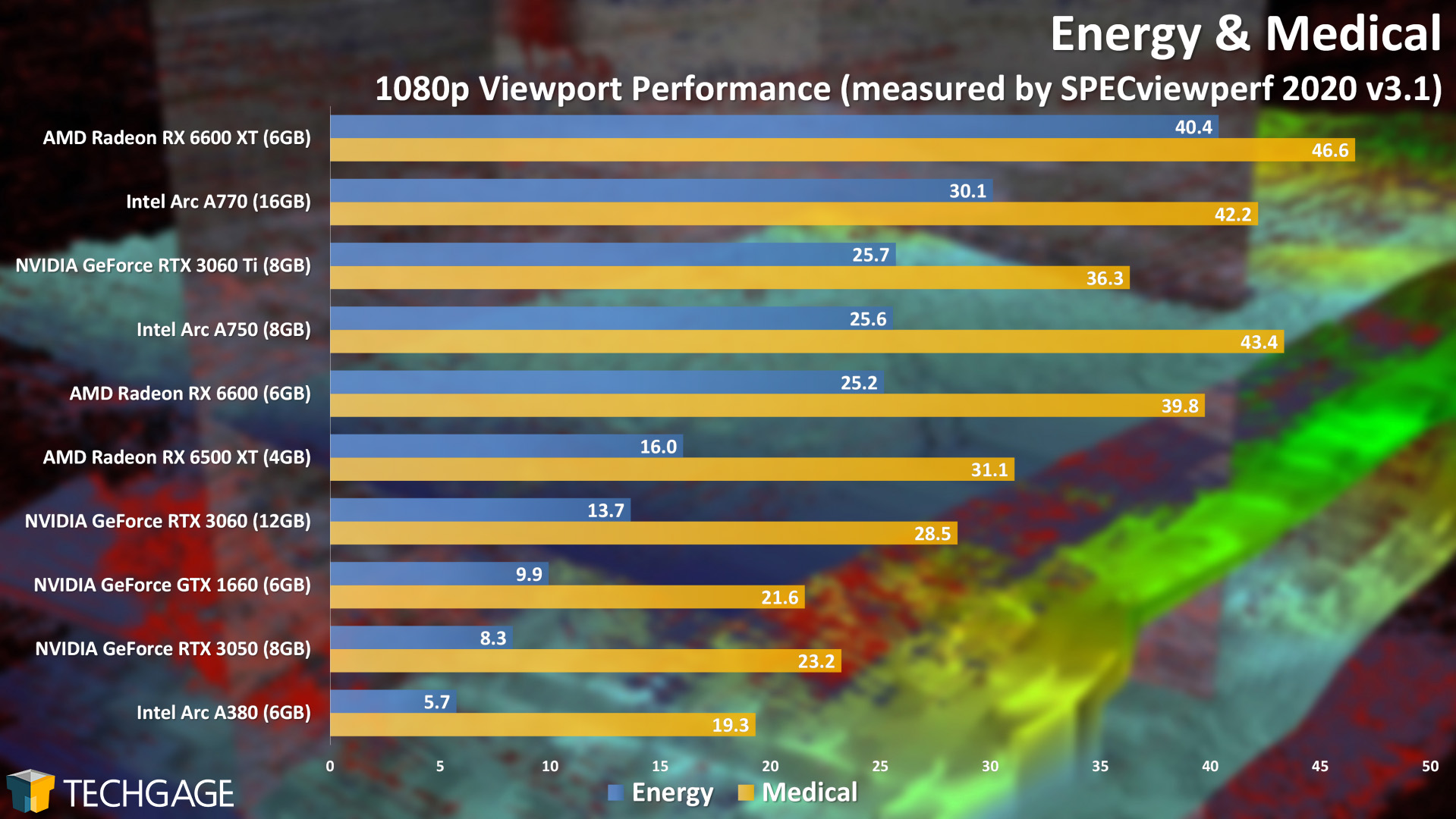 SPECviewperf is often thought to be just a “benchmark”, but that’s too simple of an explanation. Each one of the eight included tests represents performance in a real-world design application, like 3ds Max or CATIA. Each of these tools is optimized their own way, so more than any other creator workload, the results will be hard to predict.

In both the 3ds Max and Maya workloads, the Arc 7 cards fall behind more than we’d expect them to, although we’re going to assume that Intel hasn’t put too much focus on these particular workloads yet, because the vast majority of Arc would-be owners will not be considering these – at least not right now. Stability is more important than anything with these tools, so Intel will have to first prove that its driver is not just performant, but won’t crash on you in the middle of important work.

Even the CATIA vs. SolidWorks results offer unique perspectives. The Arc 7 cards perform well in comparison to the others in CATIA, but falls far behind in SolidWorks. But then we see really impressive performance in the Energy and Medical workloads. We can’t imagine a single owner of these Arc cards will be using them for such scenarios, but it’s still an interesting performance metric to note.

With Siemens NX, Arc performance sits at the bottom. The same goes for Creo, but it doesn’t suffer nearly as much as the SNX test. AMD does really well with SNX as it recently implemented its Radeon PRO optimization for the software into the regular gaming driver. 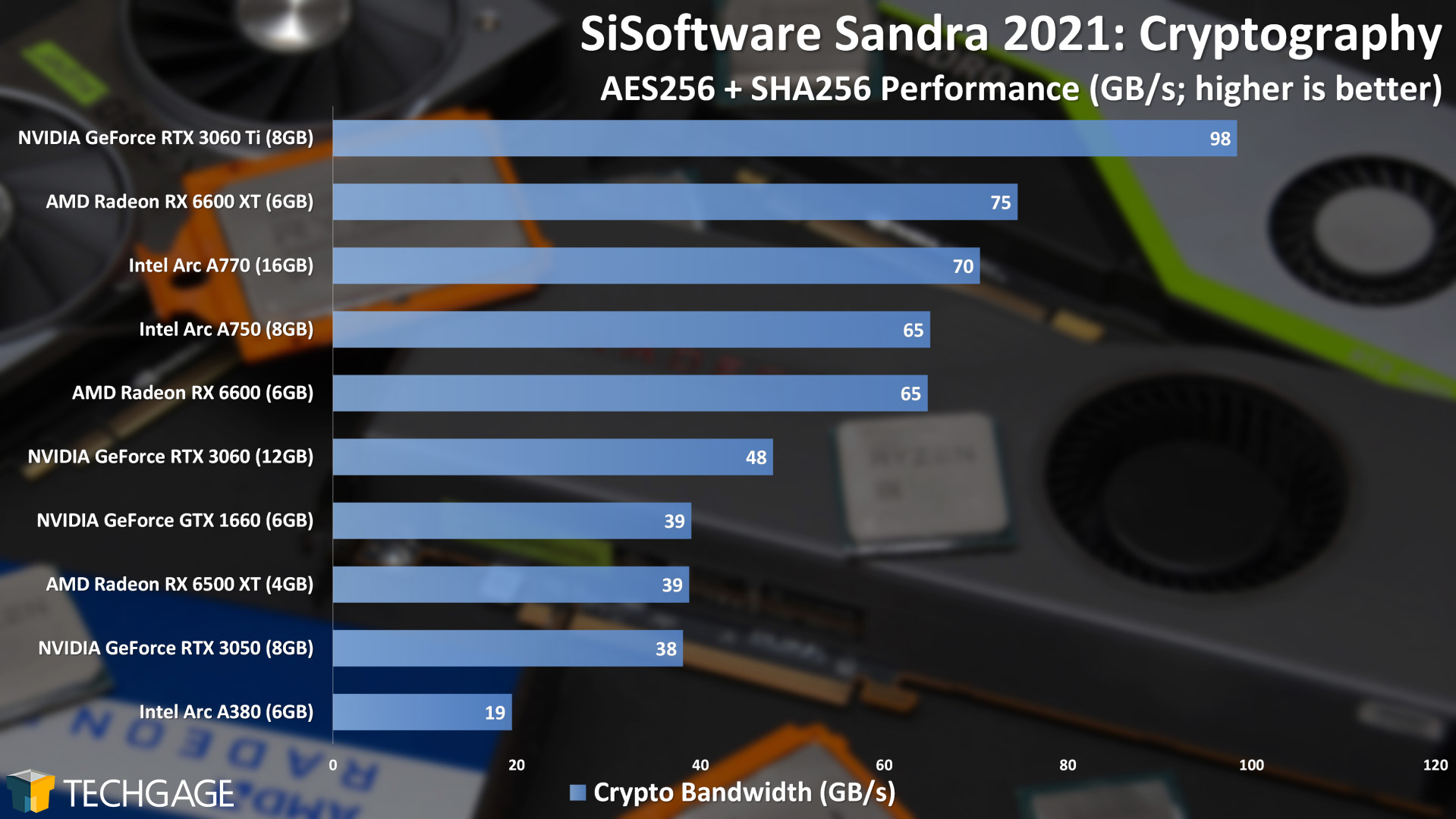 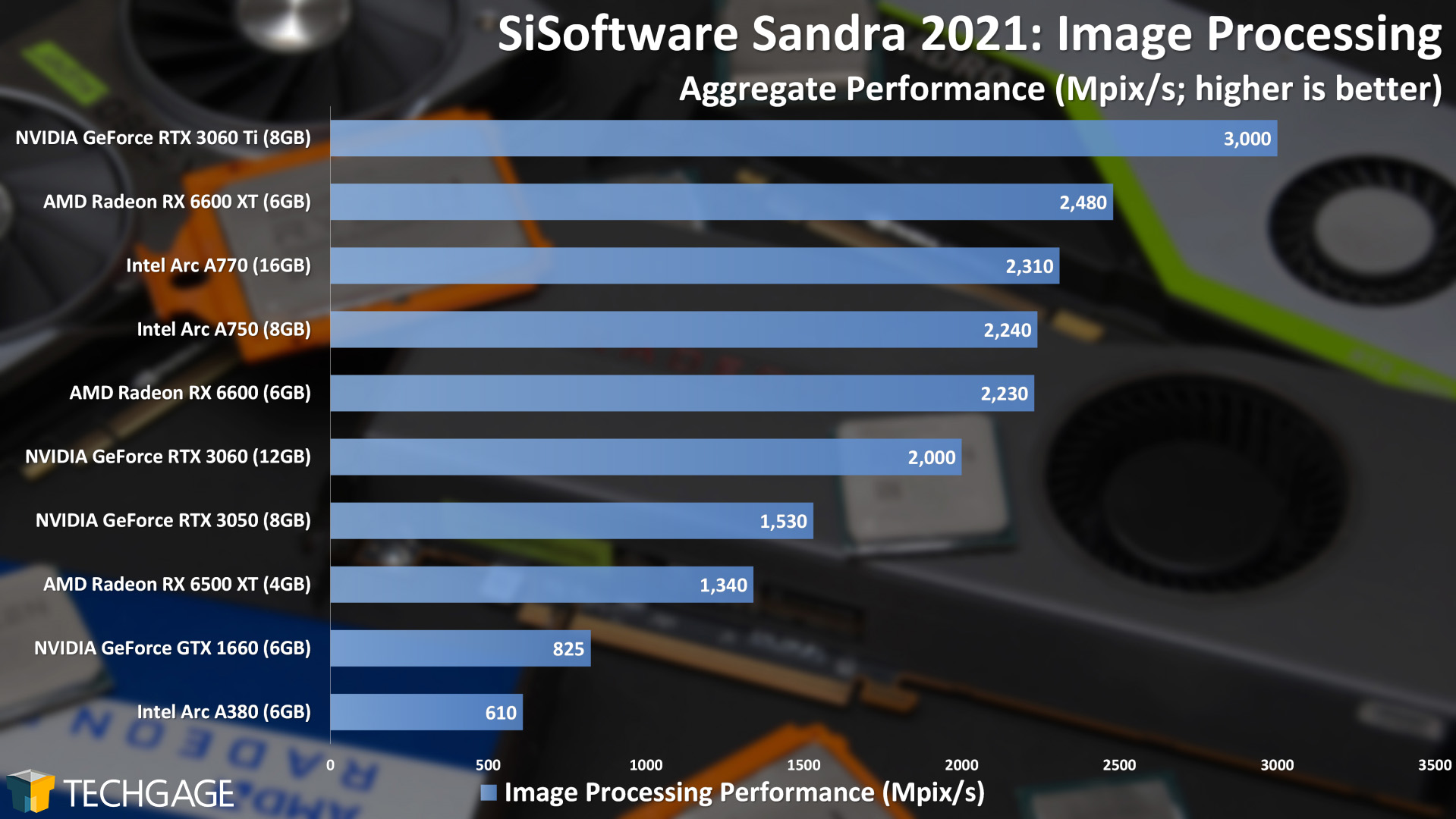 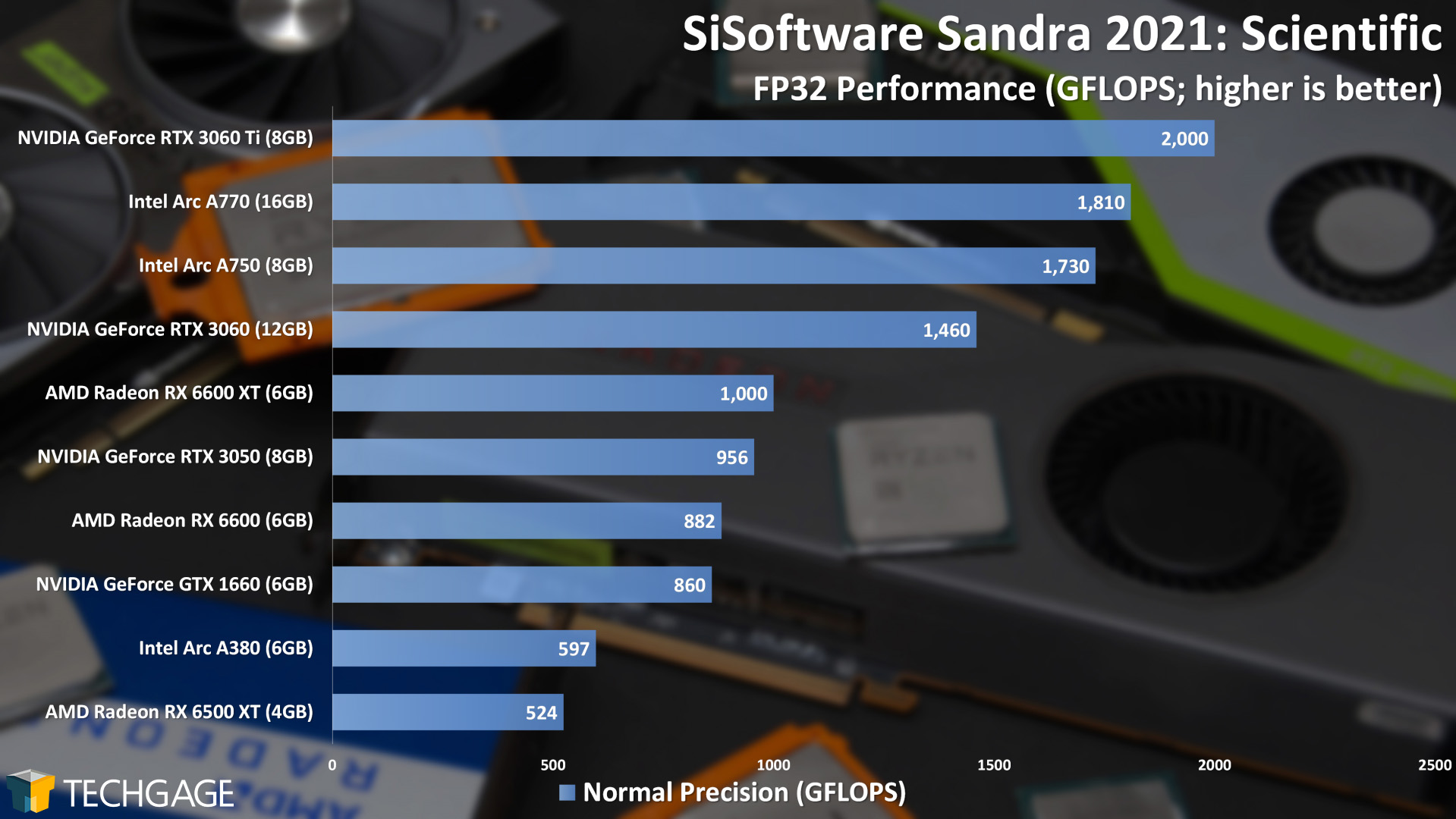 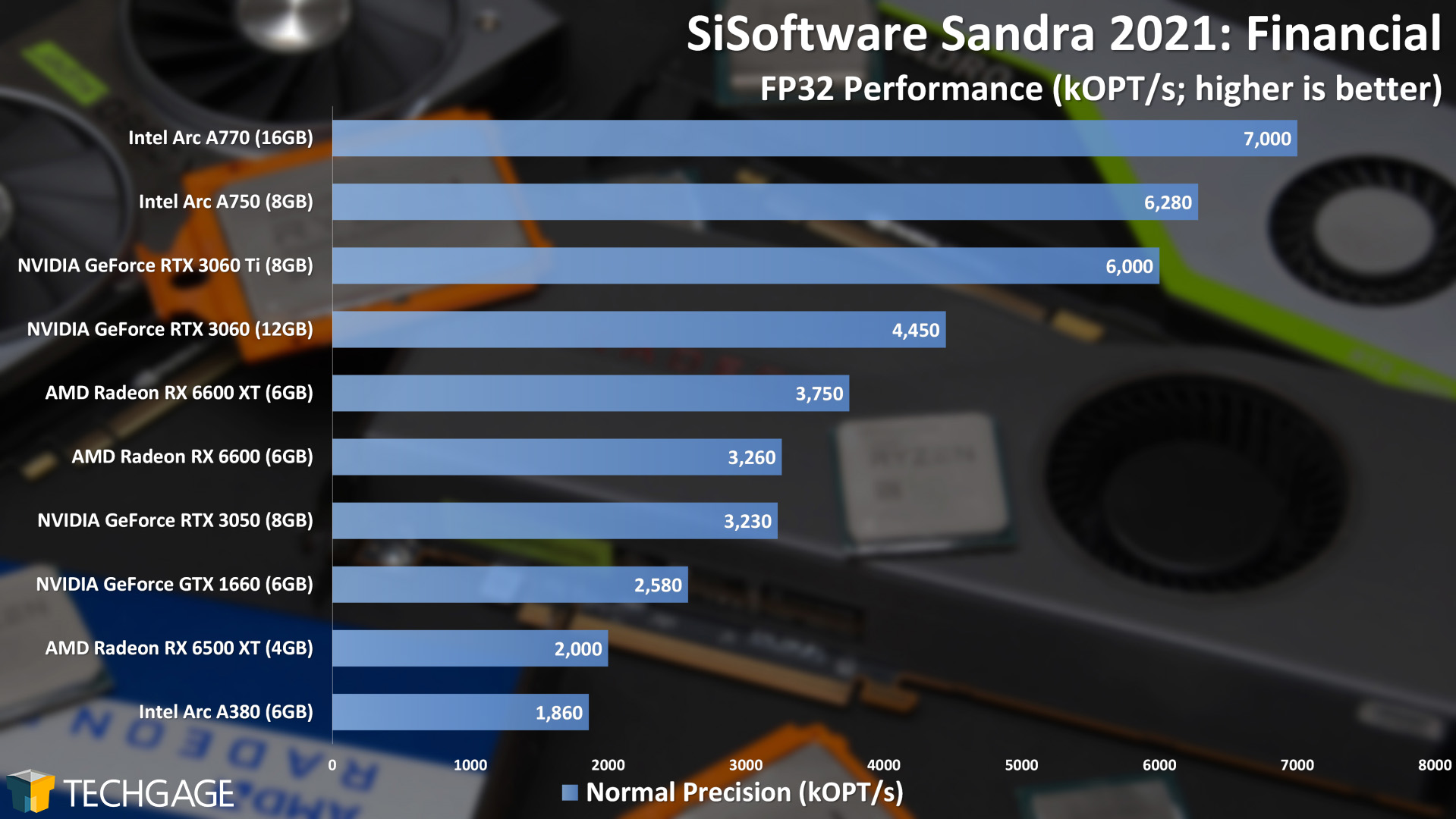 We wrap up our test results with a helping of interesting placements from Arc once again. In all four tests, both Arc 7 cards place near the top, and actually manage to take the top spot in the Financial test. Not bad for GPUs that won’t break the bank.

The dictionary defines “odyssey” as a long series of wanderings or adventures, especially when filled with notable experiences, hardships, etc, and considering how long it’s taken for these first-gen top-end Arc cards to launch, we can now understand why Intel chose to market its discrete graphics products around an “odyssey” since the moment the project was announced.

The Arc journey really was just that. It was three years ago at Computex where Intel talked about community feedback for its discrete GPU plans, and who could forget all of the fan-made GPU designs that floated around at the same time?

Being able to write this review has been a long time coming, so it’s refreshing that we’ve found ourselves pleased with what Intel has delivered here. In the months leading up to our first chance to test Arc, we were keeping our expectations modest, but we found ourselves impressed on multiple occasions. 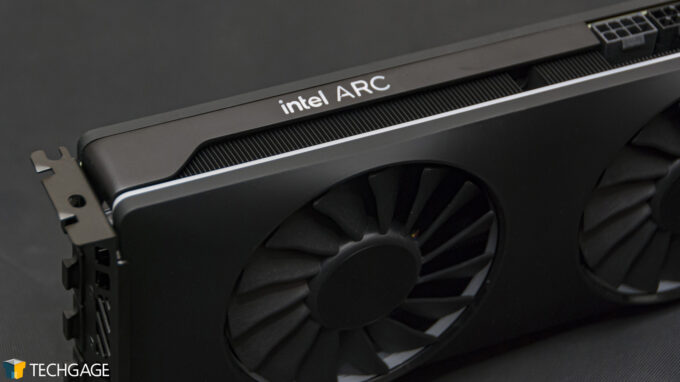 Because our focus with Arc has been entirely on the creator aspect so far, we unfortunately can’t share any thoughts on the series’ gaming performance, so it’s important to bear in mind that all of our opinions formed in this article are based on the creator aspect only. We expect Intel to perform solidly in gaming, but we can’t confidently claim that without seeing independent test results.

When it comes to gaming vs. creator benchmarking, both have their perks. With gaming, it won’t usually take long before a GPU’s overall performance picture will come together. If you test three games, that picture is unlikely to significantly change after benching three more. With creator tests, it’s a different story. Unless you’re already familiar with a workload, you can’t just assume which vendor is going to come out on top. It doesn’t work like that. These are software applications of many different designs packed with various levels of optimizations.

We like to say that it pays to know your workload, and it absolutely does. If you buy a new GPU or CPU based on a performance result that’s not relevant to you, you may very well be opting for a worse option. This is why we’re religious about sanity checking a result if we lack any confidence in it. Some scaling we see is downright bizarre, so we want to make sure it’s repeatable – and it almost always is. 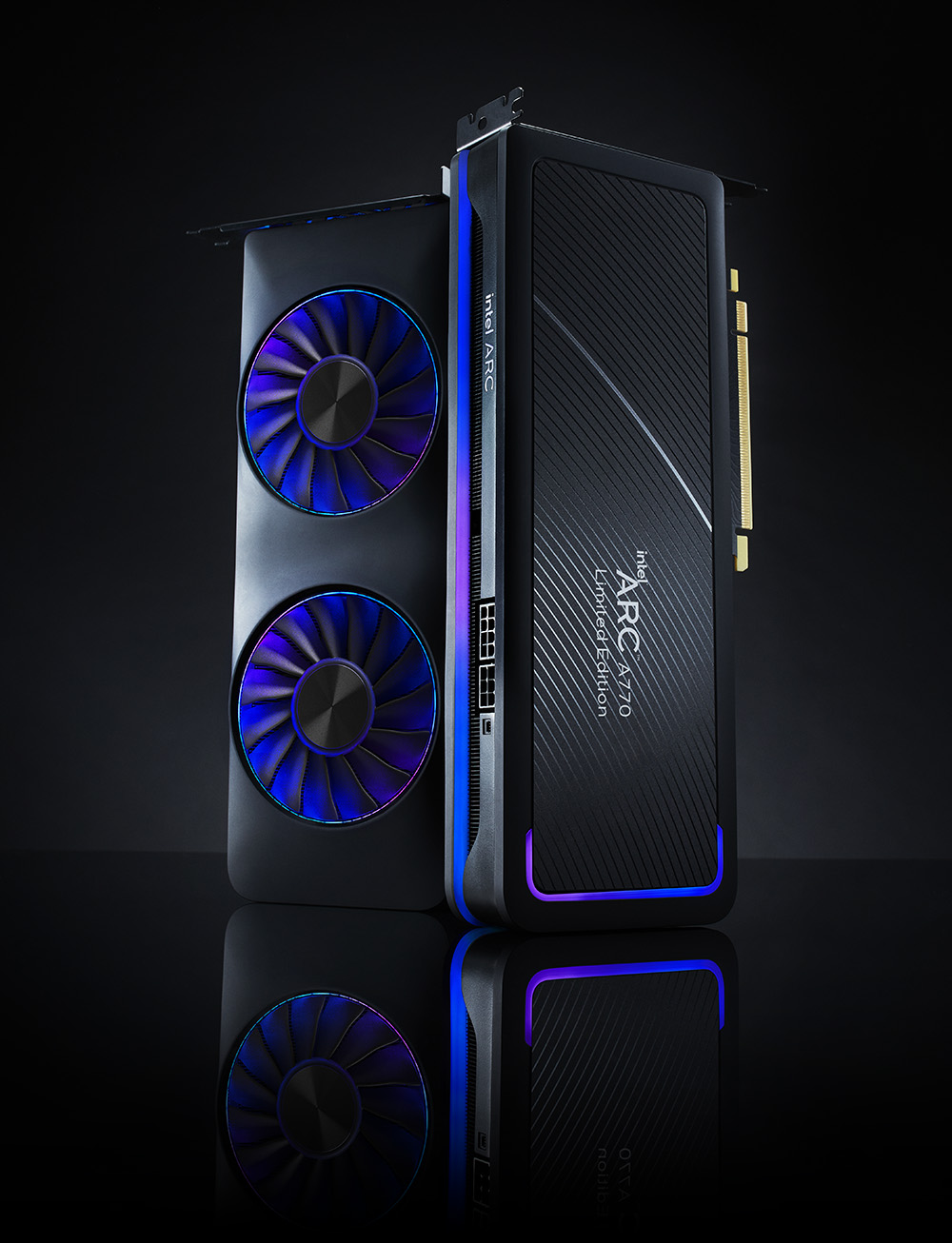 A few tests stand out of the bunch here. At the forefront, it’s clear that Intel has worked magic (or alchemy) to give Arc the fantastic encoder that it has. Across the board, all of the Arc GPUs performed great in comparison to the competition, and if all you need to do is transcoding, the Arc 3 series is likely going to be enough for you. The entire stack has the same exact encoder, something the HandBrake and Premiere Pro transcode tests can attest to.

With all we knew about Arc before its arrival, we weren’t exactly surprised by the strong encode performance, but it was nice to see the results in front of our own eyes, and in multiple software solutions. What possibly impressed us the most was the rendering performance in some cases. We didn’t expect to see a result like the LuxMark one, where both Arcs sat at the top.

LuxCoreRender utilizes Intel’s own Embree ray tracing engine, so we must imagine that it was a direct target of optimization in the drivers. Blender also has Embree elements in Cycles, and there once again, the performance out of Arc was solid – especially compared to the Radeons.

Even solutions like Topaz’s Gigapixel stand out. We’ve always thought of Topaz solutions being heavily tuned for NVIDIA GPUs, but here the launch Arc models perform well out-of-the-gate, with each of the three models we tested beating out their respective competitor. 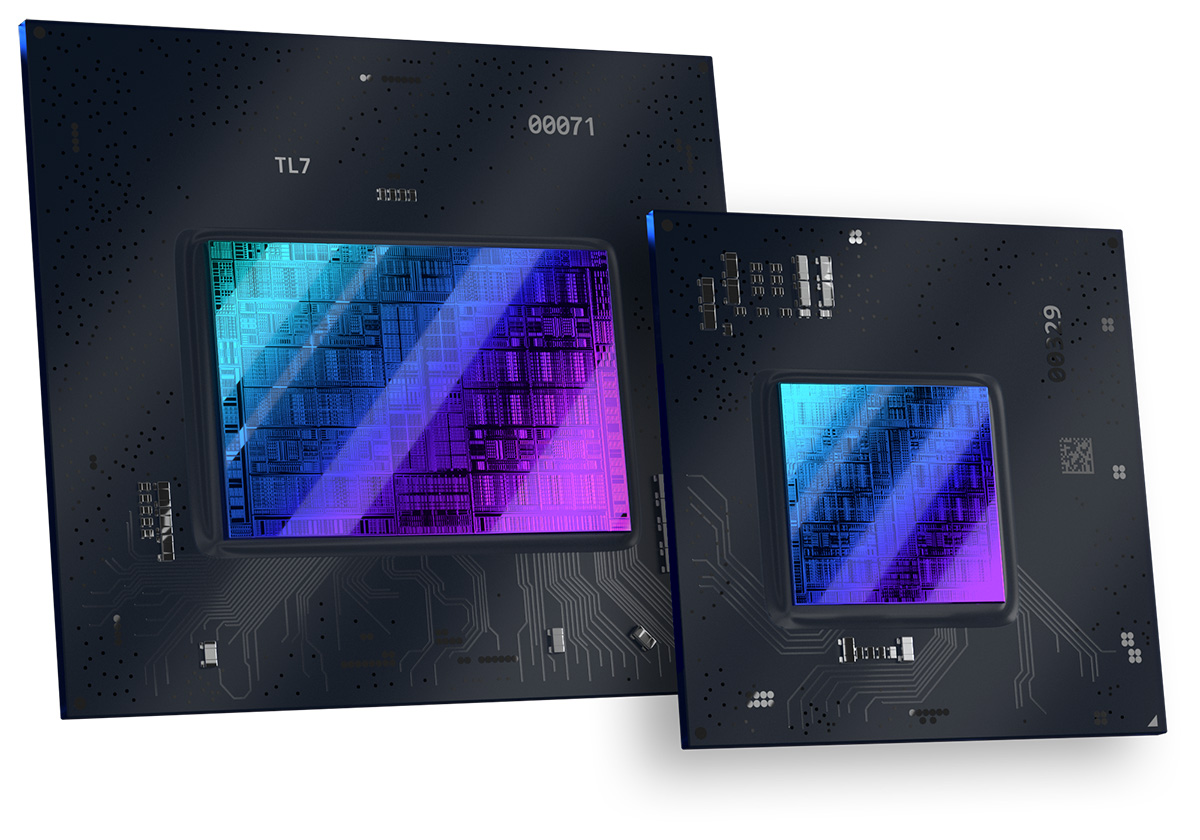 Given all that we’ve seen from our exhaustive testing here, we can wholeheartedly recommend Intel’s Arc for creative workloads. That of course assumes that you know the GPU you’re considering will complement your workload nicely – something that goes for any vendor. It also assumes you’re not willing to splurge on a higher-end GPU, which would further shave time off of an encode or render.

The one caveat we have to mention – and the reason you may want to hold off on adoption until you’re sure things are performant and stable – is that we can’t guarantee Intel’s graphics drivers will work flawlessly for you. Intel has been in overdrive polishing them up, but since we can’t test every piece of software out there, we don’t know which bugs linger that would impact you. With the Arc 7 series set to launch to the public next week, a bigger picture on stability should be easily surmised before long.

Throughout all of our testing, we didn’t encounter any graphics driver issues (except possibly with A380 not being accelerated in Lightroom), which feels impressive given we were expecting the worst. We never experienced a driver crash, or any stability issues. It could be that we got lucky, but we battered these cards hard with our tests, and don’t have a driver-related issue to speak of. We also didn’t experience bugs that led to bad output. All of our video encodes and renders looked great.

Before calling it quits here, we’d like to remind you once again that if you do decide to adopt Intel’s Arc, you will need to make sure your PC supports resizable BAR, as that is the only way you will get the full performance out of the cards. Intel’s reasoning is that this is required because the company built the GPU from the ground-up to support current and future technologies, more so than focus on older ones.

Intel undoubtedly endured a lot while working towards getting Arc out the door, so we’re really glad to see that it’s delivered even more than what we expected. Gaming might be the company’s primary focus, but Arc is a seriously strong contender in the creative space.

With this initial look at Arc’s top chips out-of-the-way, we’re going to be moving our focus towards NVIDIA’s upcoming launch, where we’ll get an even bigger picture look at top-to-bottom performance in creator workloads. Stay tuned.