For unexplained reasons, or at least perhaps because there’s been such a major workstation focus on Techgage this past year, we really didn’t have many games tested in advance of this article. The first few charts on this page represent the usual synthetic testing, with the older 398.82 GeForce driver. This is merely to see how Intel’s new chip behaves overall in gaming compared to the full stack of chips.

Because the 9900K has such a heavy gaming focus, we’d be remiss to not expand our gaming coverage at least a little bit for this article. So, after these first few charts, we’ll be throwing others at you representing AMD 2700X vs. Intel 9900K performance across seven games at three 16:9 resolutions. That covers most of the important bases, including “does it suck at 1080p?” and “is there a difference at 4K?”. 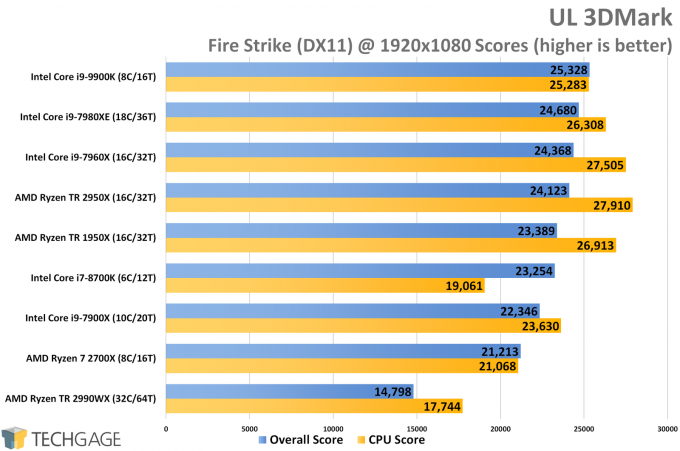 An overall 3DMark score is essentially an aggregate of the CPU and GPU tests, although the CPU tests are not weighed as heavily as GPU, which is why you see a chip like the 2950X dominate the CPU test, but sit a few notches down from the top in the overall score.

Because the 9900K has such strong single-threaded performance, it soars to the top with the overall score, despite falling under the bigger core chips in the CPU test. Interestingly, the 10-core Intel chip fell behind the 8-core 9900K in the CPU score here, hinting that single-threaded performance can help negate extra cores, which seems fair given so few modern games will take advantage of more than a few cores. 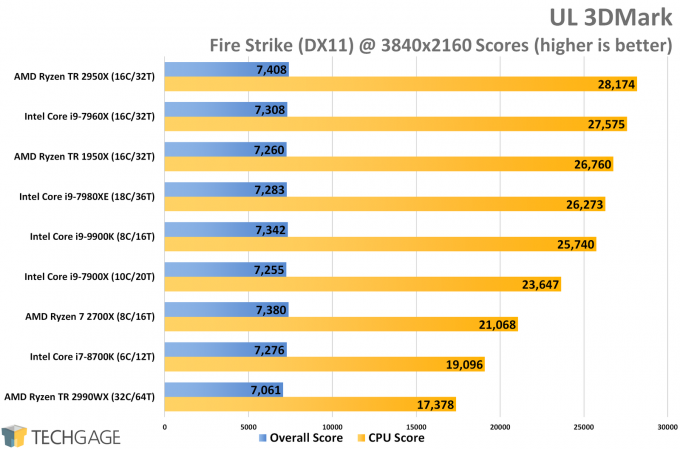 This chart seems to make a lot more sense. It’s still the DirectX 11 Fire Strike test, but at 4K resolution, and here, the CPUs seem to have saner scaling, thanks partly to the fact that the overall scores are super similar to one another. From bottom to top, there’s a delta of a mere 350 points, representing 5%.

At this level, it’s hard to declare anyone as a winner, because the performance can change from one day to the next, and the odd way the scores are tabulated puts the 2950X ahead of the 8700K, which isn’t at all the reality in real-world gaming.

Does anything change in the DirectX 12 test? 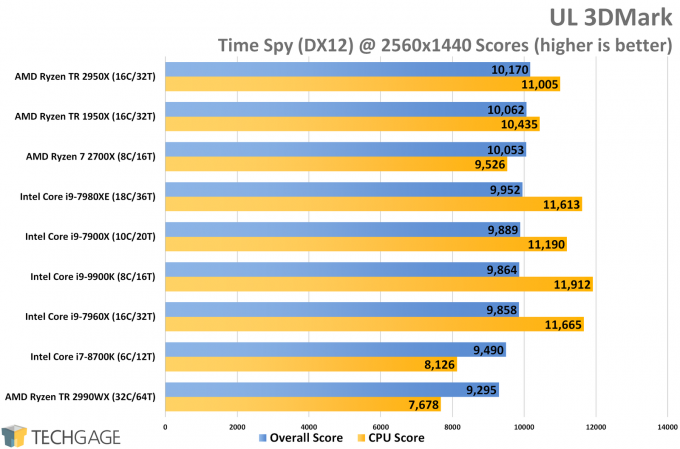 This test was run at the midrange resolution of 1440p, putting us in between 1080p and 4K. Ultimately, we see similar scaling as before, but it’s not scaling that makes a ton of sense. The 2950X again outperforms the 8700K only because it has extra cores – and again, that kind of performance difference would not be seen in the real-world. This could be the last time 3DMark graces our CPU review pages.

(The remainder of tests on this page were tested four times each, then averaged. There were no cases where one test run delivered a big enough performance delta to require a fifth run.) 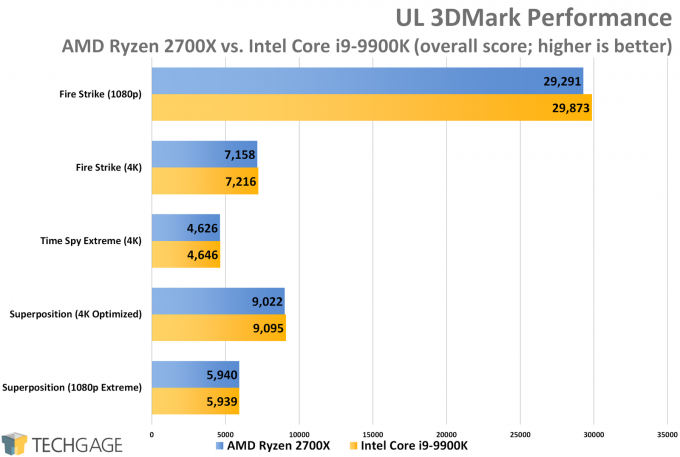 OK, we guess there was one more time when 3DMark would be seen (sorry). With completely up-to-date GeForce drivers, the latest EFIs, etc, both the 2700X and 9900K perform similarly to one another in 3DMark and Superposition overall. Intel comes out ahead, but the differences are minor in the grand scheme.

What about real games? 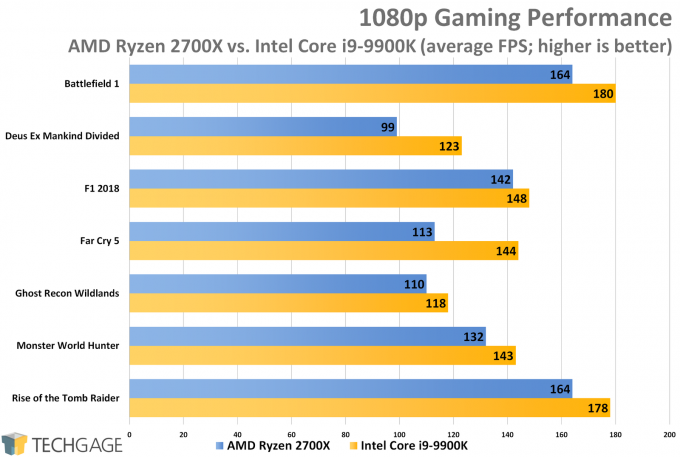 With real games at 1080p, bigger differences can begin to be seen between the 2700X and 9900K. The biggest differences are with Deus Ex: Mankind Divided (+24% for Intel) and Far Cry 5 (+27% for Intel). In fact, there isn’t a single test here that hasn’t chosen Intel as its side. Granted, it’s important to note that we’re dealing with framerates above 100 FPS, so it’s not as though AMD’s chip is delivering poor performance overall. Fortunately, even if AMD gets pummeled, it always has the performance-to-cash ratio card in its pocket.

Minimum framerates are also important, so we wanted to see if anything would change there: 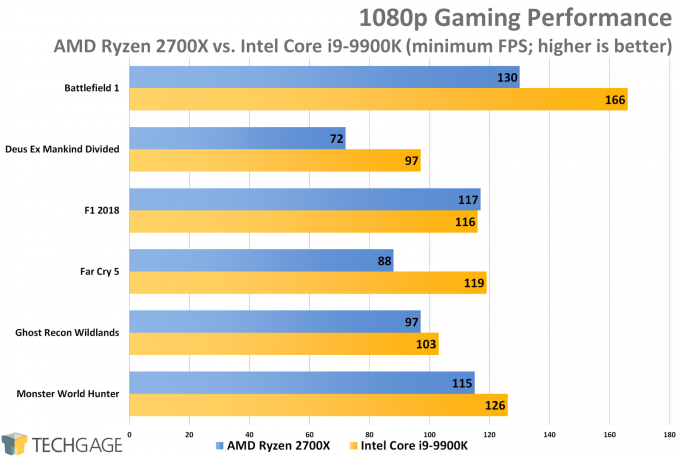 Intel wins the 1080p gaming fight quite easily. Even though all of these framerates are respectable for real-world use, Intel makes its dominance clear. Still, this is 1080p gaming; does much change at 1440p? 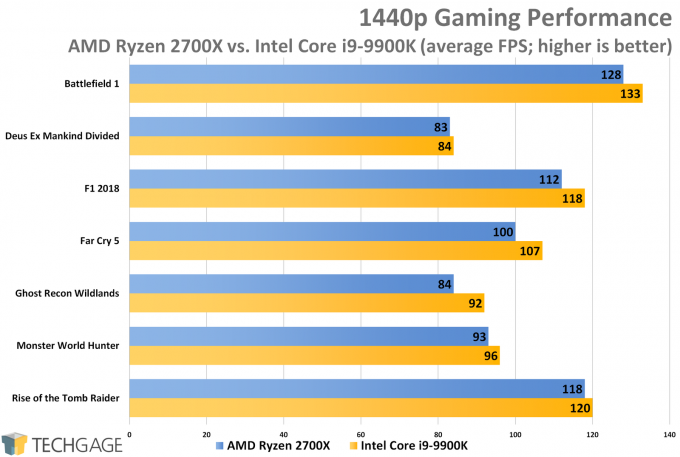 At 1440p, the gaming performance between the two chips tightens up a bit, exhibiting less difference overall. With Deus Ex, the performance becomes about identical. The biggest difference seen is with Ghost Recon Wildlands, representing a performance gap of close to 10%. What about 1440p minimums? 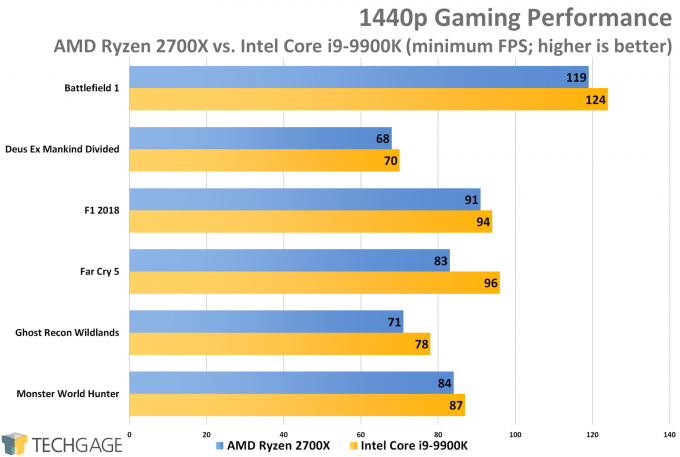 Yet again, we see pretty modest deltas between both chips here, with Far Cry 5 being the outlier with a 16% gap between them. In all cases, the minimum framerate comes nowhere near 60 FPS, which is great to see.

Overall though, Intel remains incredibly dominant. Where the 2700X could match the 9900K in some application tests, gaming is another beast, and it becomes clear why Intel’s marketing push has been so heavily gaming-focused. 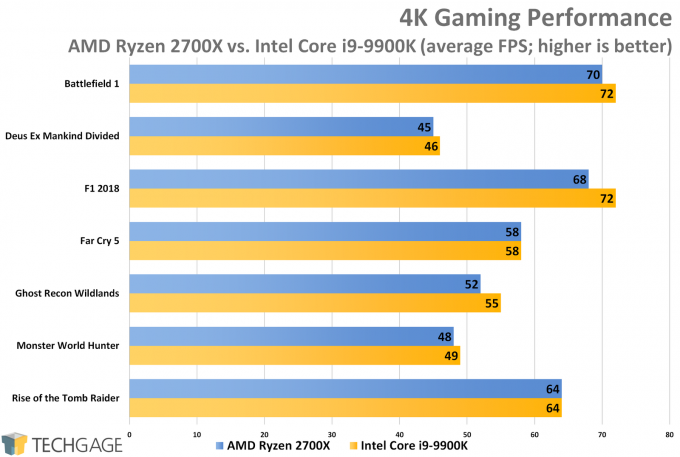 Wrapping up our gaming testing, 4K resolution shows the smallest performance deltas we’ve seen up to this point. The biggest difference here is with F1 2018, which amounts to a 6% gain for Intel. The others are either exact or extremely close.

It’s clear that Intel’s gaming prowess is strong, but the higher the resolution, the smaller the gain in performance will be. The most important aspect of this really is that AMD’s performance isn’t too bad at all. We knew Intel would come ahead, but to see such modest differences overall is nice.

But, it’s all about the minimums, baby: 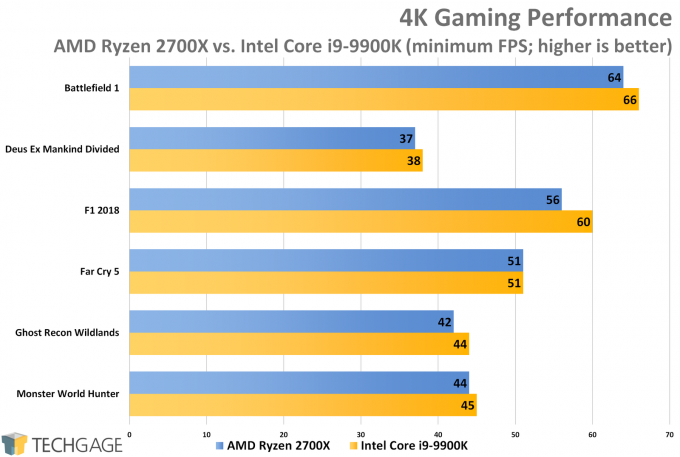 You’ve got to love the kind of strain 4K resolution has on graphics cards, because it gives people a continued reason to seek the next top-end graphics card out. In this continued look, AMD performs very strongly, although Intel yet again takes the lead in the end.

Ultimately, the performance between these two chips is quite minor at 4K, modest at 1440p, and notable at 1080p. That is to say, at high-resolution, the differences are so minor, that you’re not going to go wrong with AMD if you want to save some money. Conversely, if your goal is strictly 1080p, and especially 144Hz, you should be eyeing Intel.