No CPU review would be complete without a mention of overclocking, so we will touch on it now. We should first clear up what Techgage views as a maximum overclock. Our maximum overclocks are not posted unless it’s deemed 100% stable throughout a battery of tests. 4.5GHz might be nice on paper, but if it crashes with Super Pi 4M, it’s useless to you.

For an overclock to be considered stable, 3D Mark 06 is looped three times, followed by twelve straight hours of SP2004’s Small FFT test, one instance per core. The computer must also be turned on and off multiple times, to make sure that the motherboard is going to cooperate. As a final test, the computer is left turned off for at least a half-hour, then turned back on to make sure it performs normally.

Here’s where I am in a bind. My maximum stable overclock was 3.8GHz with 1.5Vcore, but I have a difficult time declaring this as an actual maximum. As mentioned in our review of the ASUS P5K3, the maximum FSB we could reach reliably was 475, precisely the FSB shown here. So we are at the maximum known FSB for our motherboard, with the CPU completely stable. Such a FSB is not low but I do wish 500FSB was possible, at least to push the CPU further. 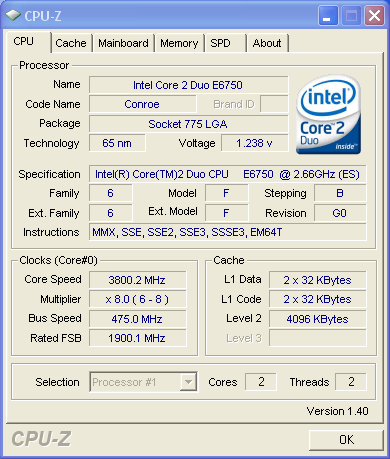 Regardless of the lacking FSB, 3.8GHz stable on a sub-$200 processor is nothing short of amazing. Granted, the core temperatures were 65°C during testing, ambient temp 77°F, but it was very stable. For those who don’t wish to raise your CPU voltage, you have nothing to worry about as impressive overclocks are still possible.

When overclocking a CPU without raising the Vcore, we do raise the voltages for the North and Southbridges. In order to retain FSB stability at higher frequencies, voltage boosts are a must. To test stability here, we run three loops of 3D Mark 06, two instances of Super Pi 32M and finish off with SP2004 for an hour. Once all said and done, the stable overclock we found was 3.44GHz. 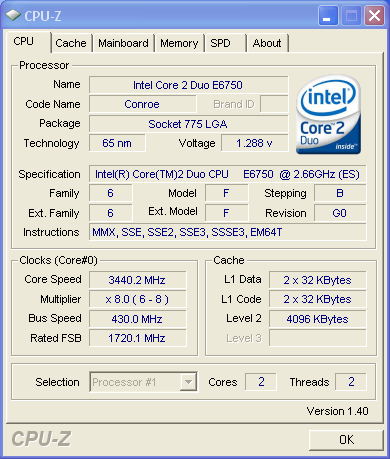 That type of overclock on such modest voltage is fantastic. The interesting thing is that even at the stock setting of 2.66GHz, the BIOS automatically sets the Vcore to 1.34v. So we found ourselves a 780MHz increase on less than stock voltage.

By now, you have all the knowledge that you need for when 1333FSB processors drop later this summer. Is there a good reason to be excited? Well, even though this is a mere speed bump, and one that many overclockers have already accomplished long ago, the reason most people have a reason to look forward is the price.

As mentioned on the first page, the E6750 is expected to retail for $189, but will likely cost closer to $200 on most e-tailers. Compare this to current E6700 processors that currently retail for $300+. It’s not hard to see the benefits here. Unless you need a processor for a new build right now, it would be wise to hold off until we see these launch.

Simply put, I don’t recall the last time I finished benchmarking a new CPU with the feeling of being this impressed by the $/performance ratio.

For the non-overclockers, you will still have the benefit of faster than E6700 speeds and also the ability to run 1:1 ratio with your DDR3-1333 memory, should you decide to buy some. If DDR3 prices don’t go down by the time these new processors launch though, it might be one of the rare times where the ram costs twice as much as the CPU.

For overclockers, $200 means a CPU that has the potential to reach 3.8GHz stable on a standard water cooling setup, or 3.44GHz while retaining stock voltage. I think that speaks for itself.