Intel’s 45nm Dual-Cores have finally arrived, so it’s only fitting that we take one for a spin. Our test subject is the 3.0GHz E8400, offering 6MB cache, SSE4 and more. Overclocking is impressive, with 3.8GHz stable being possible without even raising the voltage! This chip definitely proves itself a winner.

It’s no secret… Core 2 Duo’s have been some of the best overclocking chips for the past year and a half. Unlike their beastly Quad-Core brothers, Dual-Cores run cool and allow for much more overclocking headroom. That, once again, has been further proven with the E8400.

One would imagine that the step to 45nm would decrease the TDP, but that’s not the case here. The Dual-Core products still retain the same 65W TDP that the 65nm models do. However, that doesn’t mean much because it’s been proven already that the 45nm processors run use less power and are cooler to boot. You can read more about that in our review of the QX9770.

So given the TDP, one would assume that the required voltage to run would be similar as well. Personally, whenever I benchmark a new CPU, I keep the CPU Voltage at 1.3v, as its proven to be the stable setting for all CPUs tested. The motherboard though, more often than not, will set it even higher than that. So, with the E8400, 1.3v might still be the most common voltage setting, but as we found out during testing, it’s able to run stable on far less.

For an overclocked setting to be deemed stable, it has to be stable. If an error shows its ugly face after three hours of stress testing, it’s not stable. Some might argue that such an error will not likely effect regular computer usage, and that’s true. However, calling an overclock stable when an error arises… doesn’t sit well with me.

The stress-tester of choice is SP2004, with an instance on each core. Using the Small FFT mode, the cores are kept to 100% usage for as long as the test it run. As a result, if errors are possible, they will most likely be detected within fifteen minutes. I’ve rarely run into an error after an hour of running the test.

For a modest setting to be considered stable, I require a three-hour run to pass without errors. For more serious overclocks, I stress for eight hours – more, if time permits. Once SP2004 is finished, 3DMark 06’s main suite is looped five times, to ensure that gaming is stable as well. After this, miscellaneous benchmarks are run to further solidify the fact that a given setting is indeed stable.

Before I concluding on an overclock, the machine is shut down and five minutes pass before booting it back up. If it boots fine and still proves to be stable, the CPU settings are reset to stock. Afterwards, the overclocked setting in question is again set and the computer reboot, to make sure that the overclock was not a one-time affair. If it passes all these tests, I consider the overclock to be stable.

Please note that while I used the ASUS P5E3 Deluxe motherboard for our benchmarking, all overclocking was done using ASUS’ Maximus Extreme board, as it’s more suitable for high-end overclocking. The lone downside of the board is the fact that the lowest CPU voltage setting is 1.1v, but that’s what we tested out first. For cooling, a Zalman 9700 was used.

The CPU will most likely be run at 1.25v – 1.3v on most machines if the Auto setting is used, but as discovered, even 1.1v was deemed stable after a three-hour period. Everything tested at this setting was stable… gaming and benchmarks included, not just SP2004. 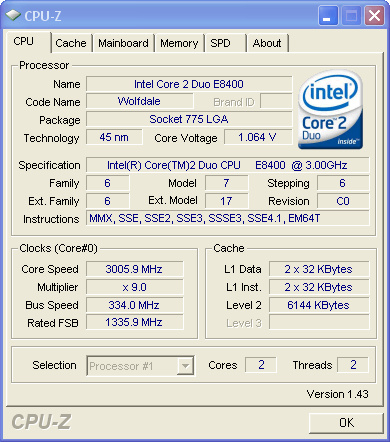 Our second goal, of course, was to see how far the CPU could be pushed while retaining stock CPU voltage. Bear in mind though, the Northbridge voltage did have to be increased in order to handle the higher FSB. The CPU voltage stayed at 1.3v.

How does 3.825GHz sound? I was impressed with the headroom here, and was unsure when I was finally going to hit my limit, but this was it. In order to keep 425FSB stable, I increased the Northbridge voltage from 1.45v to 1.55v (it’s minor). 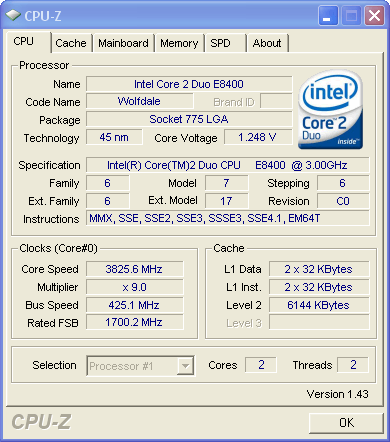 Sadly, I somehow lost the proof of stability screenshot when moving in between computers, so I don’t have one here for this setting. I am re-running all the stress tests and will update the review later today with the screenshot. (01/30/08 6:25PM Update: Image can now be clicked. Problem arose with original follow-up stress due to NB voltage accidently being too high (1.65v). When set back to 1.55v, it was stable again.)

After finding out that 3.8GHz was stable using stock CPU voltages, I decided to go full out and find the maximum possible stable overclock for the chip. Remarkably, that turned out to be 4.23GHz. As evidenced in the screenshot below (click to view full), that overclock ran for eight-straight hours without a single error.

I’ve never had a Dual-Core overclock so high and still remain stable, so I was skeptical. I put the CPU through all it’s paces… and nothing could stop it. As you can see in the screenshot below, it ran a collection of benchmarks without issue. The important thing to note here is that this is a true overclock that increases performance. All results scale well, so heat didn’t become an issue at all, despite the chip running at an average of 68°C on each core. 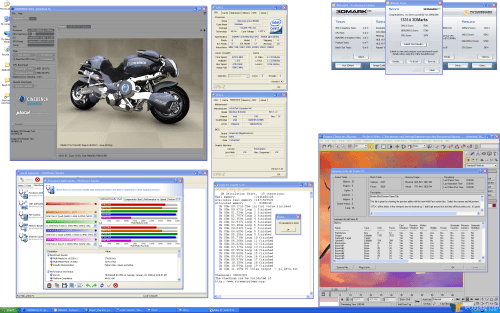 If you take a look at the Sandra results, you will notice something interesting. Our E8400 at 4.2GHz effectively passed by the Q6600 in terms of raw performance. Despite having half the cores of the Q6600, the huge overclock made up for the loss… and then some.

Another thing that strikes me is the Super Pi result. While not that relevant today, when Conroe was first launched, it was deemed extraordinary when enthusiast overclockers broke through the 10s mark with the new processors. Now, even us casual overclockers have the possibility to break through that milestone… on air. That is beyond impressive.

One downside here is that I believe this CPU still had more room to push. I became limited by the motherboards FSB, which may or may not have had anything to do with the CPU. Running 470FSB was fine, but moving up to even 475FSB would spawn errors in SP2004 within five minutes. While 4.2GHz is undeniably impressive, I can’t help but feel it could be pushed a bit higher.