Like Call of Duty 2, FEAR first hit our PCs in fall of 2005. When it did, it proved to almost everyone just how badly our computers needed upgrading. It was one of the first games to truly benefit from having 2GB of RAM installed, but of course also a massive graphics card. Even today, running a high-resolution FEAR is a visual treat.

The third level is our destination today, which begins us out beside two friends who send me off through various buildings, kicking some ass en route. I am unsure where the final destination is, as I’ve never explored that far, but throughout our five-minute gameplay we encounter four enemies, outdoor and indoor areas and even have a strange horror sequence occur. 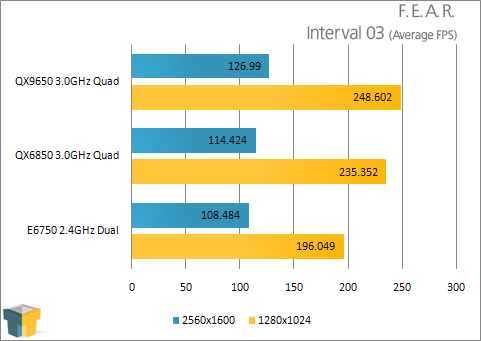 Intel’s claims of double-digit increases are spot-on, with a 12FPS increase at 1280×1024 and 13FPS at 2560×1600. This would be more impressive if the overall frame rates were not already in the hundreds, however.

Yet another game that needs no introduction, Half-Life 2: Episode Two was a proper sequel to Episode One, although the duration in which people had to wait between the two was a little questionable. Luckily for fans though, Episode Two proved to be more of what we love. It was a win/win. Introduced with this version were achievements as well, which let you know how much of a fan you really are.

We are using the Silo level for our testing, which is a level most people who haven’t even played the game know about, thanks to Valves inclusion of it in their Episode Two trailers over the past year. During our gameplay, we shoot down a total of three striders (their locations are identical with each run, since we are running a saved game file) and a barn is blown to smithereens. 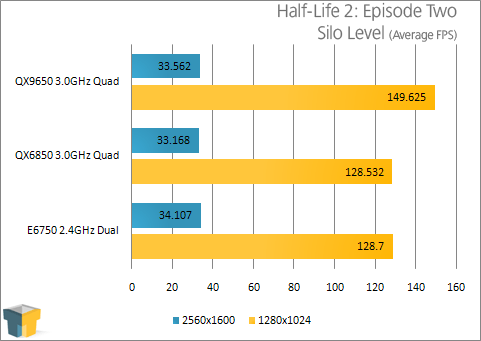 At our max resolution, neither processor had a real benefit, although our dual-core came out on top. Using a lower resolution acheived the double-digit gains Intel expected to see.

If you are not a fan of Capcom, you might not be a fan of gaming. They’ve produced some true classics over the years, but sadly, Lost Planet is not one of them. You take the role of Wayne Holden who is on the snowy planet E.D.N. III and attempts to recover memory of his past while doing battle with an insane amount of aliens who want him dead.

The game is available with DX10 enhancements, but since all of our game testing is being done on Windows XP, we are overlooking those. Lost Planet is the only game in our testing today that is run using the built-in benchmarking tool. This test drags the user through various parts of a level and reports an average FPS at the end. That’s the number we’ve noted here. 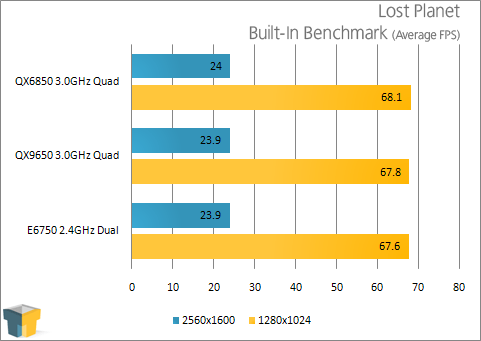 Despite being a CPU intensive benchmark, we saw no advantages between either of our processors. Even our dual-core performed on part with the Quads.