Need for Speed has been a leading racing series for years, and for good reason. Each game delivers what gamers want… the ability to drive very fast cars that they are unlikely to afford. Carbon brought a few new things to the series, such as the ability to recruit help, Canyon Races and more decals and car modifications than most people need.

Because EA is to slow to catch on to what gamers want, Carbon does not support wide-screen resolutions on the PC. This… is absolutely ridiculous, but I have hopes that the upcoming Pro Street will prove to me that EA gets a clue. Because of this, we are not using 2560×1600 here, but rather 1280×1024 and 1600×1200. The race we are using is the first available under the Quick Race section, using the Koenigsegg CCX. 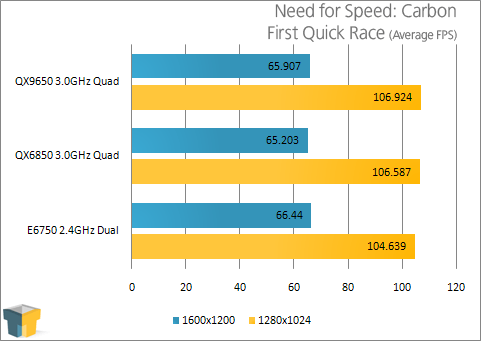 Did we need another “post-apocalyptic” FPS game? Of course we did, or at least THQ thought so. STALKER proved to be a good game though overall, and very different from your standard FPS, which is why it’s done well in the marketplace. The game has great visuals, with a realistic world that isn’t out to give feelings of joy. Rather, it’s dark and gritty, appropriate for what you’d expect after a power plant explosion.

Our mission is one that geeks all over can relate to… to deliver a thumb drive to it’s rightful owner. Seems odd given the situation everyone is in, but that’s not what is important! What is important is that we find out which processor handles this quest the best. 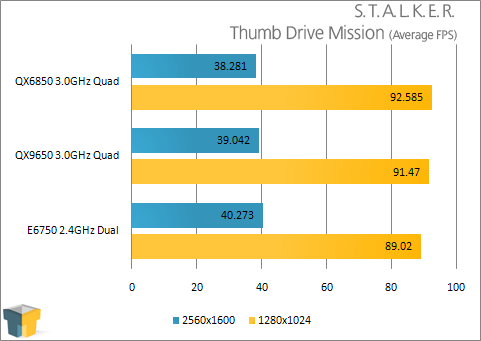 It’s been quite some time since we’ve seen a UT release, but fans are soon to be treated with the third installment, appropriately called Unreal Tournament III. This game as you would expect has superb graphics and surprisingly, it should run well on most current “decent” gaming machines. Anti-Aliasing is disabled in the game, helping to speed up performance all around. Our single 8800GTX card proved more than capable to run the game with maxed out settings at 2560×1600.

Shangri-La is our level of choice, a standard deathmatch affair. Our run consists of going through as much level as we can, while making fifteen kills total. 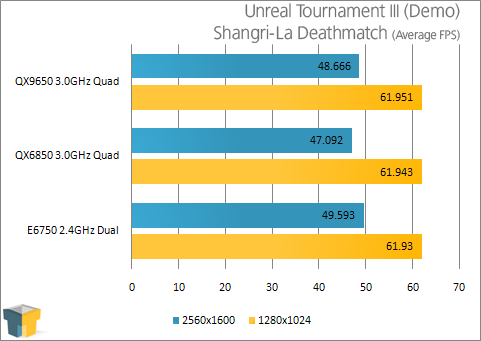 With these last three games, differences are seen, but they are minor. The only games to have actually exhibited real increases out of the nine we tested were Half-Life and FEAR… both games that offer high frame rates to begin with.