It’s time to get our hands dirty with manual benchmarks… true real-world tests! Yorkfield brings many interesting things to the table, so we are using a variety of new applications to benchmark in our review today to better test the processor. To start off our battery of multi-media tests, we will be taking a look at two video encoding applications that both benefit from SSE4, DivX and TMPGEnc.

The DivX encoder has supported SSE instruction sets to some degree in the past, but beginning with 6.6.0, SSE4 support has been added in the form of “Experimental Full Search”. Although I have been unable to see quality differences between the original encoding method and this new algorithm, I am told that overall quality should prove better with the newer method. The downside is that the newer process takes longer than a standard process, but that’s where the benefits of SSE4 come into play.

When using DivX 6.6.0+, you will notice the Experimental Full Search option available under the Codec tab, which is left at Disabled by default. This, as we found out, is a good thing since it does indeed take longer overall. If you are a media enthusiast who cares a lot about quality and doesn’t mind the extra wait, then this might be the route to take. The end result may vary depending on certain factors, such as original video codec, original video quality and video length.

Using the default options, the differences are small. Our Yorkfield did prove faster overall, but it was just over 4%. We decided to stick with our Experimental Full Search testing here, since we have a Nero Recode test coming up with takes care of a similar “stock” option.

For our testing, we are using a 0.99GB high-quality DivX .AVI of Half-Life 2: Episode Two gameplay. The video is just under 4 minutes in length and is in 720p resolution, which equates to a video bit rate of ~45Mbps, not dissimilar to standard 720p movies. We converted the video two different ways.

First, we encoded the video at the same resolution but a lower quality, so as to achieve a far more acceptable file size (~150MB). The second method is encoding of the same video, but to a 478×256 resolution, similar to what some mobile devices use. This last method is not entirely realistic as it’s unlikely the exported video would work right off the bat on such a device, but the test is to see the benefits of SSE4 in general. Though DivX is the only popular codec to utilize SSE4 at this time, many more should offer support in the new year, making these results relevant. 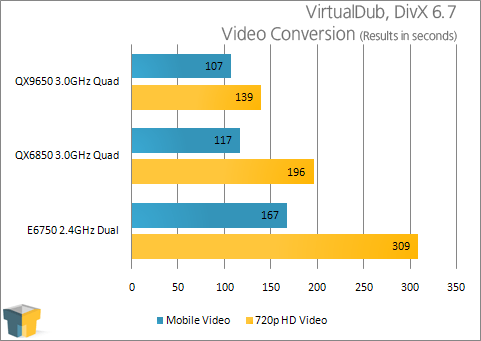 It’s hard not to be impressed with the results seen here. Although the differences are somewhat small with our Mobile Video conversion, the larger 720p was 41% faster thanks to SSE4 enhancements. We believe the mobile results are less than stellar due to the fact we rendered it in an unconstrained DivX profile. However, now we have a general idea of what to expect from non-official DivX profiles.

That all said, we didn’t quite hit the same performance as we saw at last months IDF, but 40% is nothing short of incredible.

TMPGEnc XPress is a great application for being able to take a variety of video types and convert them to numerous different file formats for use elsewhere, such as DivX, H.264, QuickTime and HDV. Like DivX above, TMPGEnc 4.4 and onward supports SSE4. That’s the good news. The bad news is that this version is currently unavailable to consumers, but will be beginning in the new year. The developers consider it to be “very experimental” at this point in time. 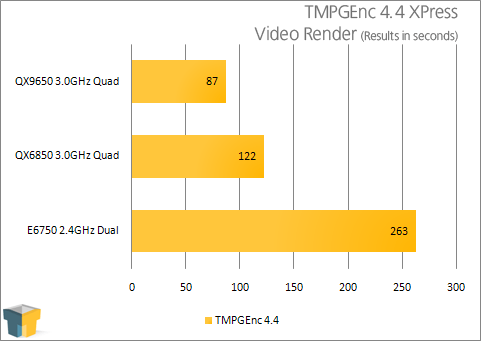 It’s safe to say that 40% faster rendering with SSE4-encoders is a safe average to go by, as both our DivX and TMPGEnc runs delivered the same performance gains. What Core 2 Duo originally did for desktop performance, SSE4 does for multimedia enthusiasts. The addition of these instructions is a huge benefit.