Before we dive in too deep, I wanted to clarify a minor detail. You might have noticed that up to this point, I’ve been calling the i7-980X a “six-core” processor, rather than something like a Sex-Core or Hex-Core. I queried Intel as to the reason for this, and we were told that it’s not even calling Gulftown a “six-core” processor. In fact, it seems to be avoiding the core talk altogether, and it might not be a bad idea given the regular consumer probably isn’t going to care about the number of cores, but would rather just know how kick-ass one model is compared to the next.

As far as AMD is concerned, I’m not quite sure if it shares the same idea, but at least there, it takes no effort to understand the number of cores in its processors, thanks to the simple naming scheme (X2, X3, X4, X6, X12). I might have made the last one up.

So that said, what makes Gulftown what it is, and what’s its positioning? Those questions will be tackled here, beginning with a look into the actual Gulftown die. As you can see in the image below, the layout of the chip isn’t much different from Bloomfield’s. The memory controller still lines the top, and the miscellaneous I/O and QPI accesses are found on each side. Likewise, the L3 cache is placed directly underneath each core (2MB each), while the Queue and Uncore neatly divide up the two sections.

Like Bloomfield, Gulftown is a native six-core processor, not simply two tri-cores fused together. AMD’s upcoming Phenom X6’s will also have a native design, so hopefully we are completely done with the hacked designs we’ve seen in the past, such as with Intel’s own Core 2 Quad line-up. 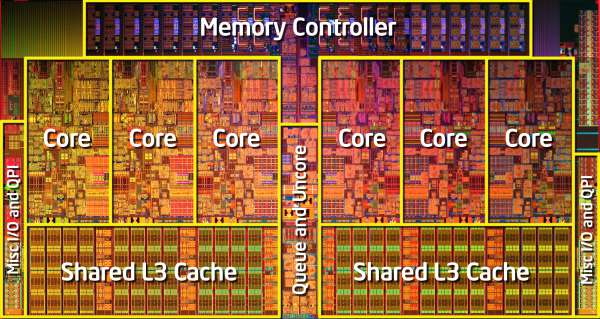 As a quick recap to Intel’s method of doing things, Gulftown is based on the Westmere architecture, which was first seen with the Clarkdale and Arrandale chips earlier this year. All Westmere chips are based on the 32nm process, and are officially part of Intel’s “Tick” phase. Tock will came later this year with Sandy Bridge, which will also be based on a 32nm process, but will feature a new microarchitecture. 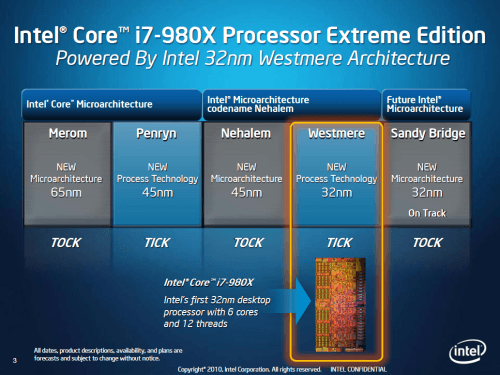 The target audience of Gulftown, or at least the Core i7-980X in particular, is the same audience that all Extreme Edition’s target. It’s for those who want nothing but the best… a chip that delivers unparalleled multi-tasking, incredible performance in multi-threaded applications, and of course, overall flexibility. In previous discussions, I compared moving to a six-core from a quad-core being similar to moving from a large hallway to a living room. The hallway may have allowed a fair amount to get done, but the living room is obviously going to provide you with more breathing-room.

And believe it or not, as we’ll see in some of our tests later, there are many applications that are able to take advantage of a six-core processor. As our current test suite was finalized in late 2008 (we’re in the process of revising the entire thing), not all of our tests are as multi-threaded as others, but even with what we do have, the differences are easily seen. 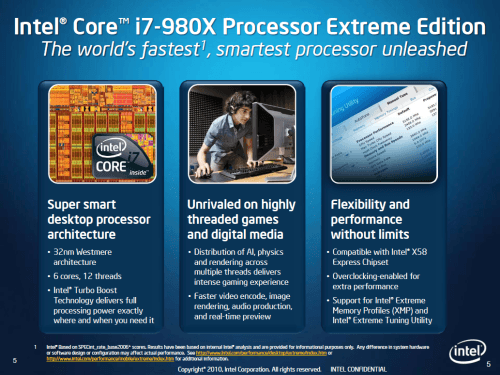 Another major benefit of Gulftown, as if we needed another one, is that it’s backwards-compatible with the X58 chipset. So if you happened to have purchased an X58 board at launch for the Core i7-965 or any other Bloomfield-based chip, you could go and grab a BIOS update to open up Gulftown support. The support is of course based on a vendor basis, though, so I do recommend double-checking to make sure that your particular board does indeed have a BIOS for Gulftown support.

One of the more interesting features that launched with Bloomfield in late 2008 was the “Turbo” feature. This of course is what allows the processor to boost its clock just a wee bit when it’s being stressed, for improved performance. The method in which it operates can be seen below, but there’s something a bit interesting that caught me off-guard. Can you see it? 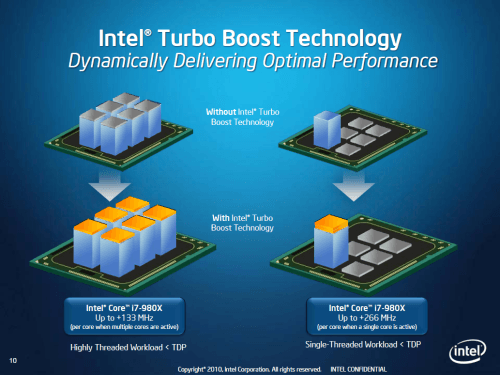 With the Lynnfield launch this past fall, and likewise with Clarkdale’s launch this past January, we saw what was essentially a boost to Turbo, where the Turbo on these CPU’s are much more effective than the Turbo on Bloomfield. As we’re dealing with the Westmere microarchitecture here, I half-expected the same kind of robust Turbo performance, but as you can see in the chart above, the height of Turbo will be two extra steps on one core. Compare that to five steps on a Lynnfield chip.

So what’s the reason for the throttling down? My theory is that Intel doesn’t want to exceed the 3.60GHz mark on any of its current CPU’s, and to back me up, just take a look at our table on the previous page. There’s only one CPU that has a Turbo to exceed 3.60GHz, and that’s the Core i5-670, which can go to 3.73GHz. My reasoning there is that it’s a lot safer to hit a higher clock on a dual-core than it is a quad-core, much less a six-core. Intel seems to be playing it safe, and I can’t fault it for that.

Before I wrap up here, there’s just one more thing Gulftown has brought to the table worth mentioning. This if course has been rumored for a while, and it’s absolutely true. Intel has upped the ante and delivered not just a standard CPU cooler we’re used to seeing, but rather a custom-designed enthusiast’s cooler designed for overclocking and overall excellent performance. 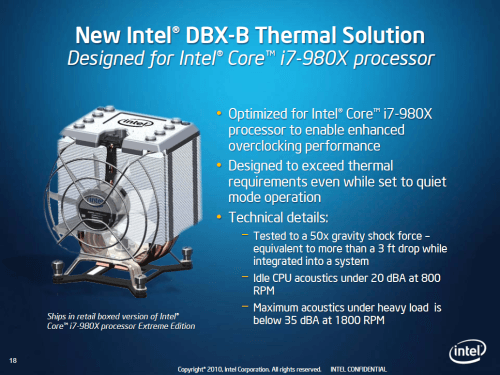 It’s not the prettiest cooler out there, but it’s not meant to be. Rather, it’s meant to be effective and if desired, quiet. It’s important to note that this is an Intel-designed cooler, not one the company simply ordered en masse and re-branded. At this time, it’s only going to be included with the Core i7-980X processor and not sold separately. The company could always change its mind based on overall feedback though.

For vendors that sell custom-built PC’s and pair them up with the i7-980X, they have the option to change the branding at the top. I assume the “Intel” logo on the fan, and the general design couldn’t be altered. But it’s definitely a decent option for those companies who want to include the cooler, since it almost comes paired in with the price of the processor alone.

Aside from all that, it’s actually quite an effective cooler, and with it, our Gulftown sample ran cooler than our Core i7-975 using a Thermalright Ultra-120. Intel definitely put some legwork into this one, and if you’re going to be purchasing the i7-980X, you really don’t need to fuss over the CPU cooler, this one is just fine.