Well into the Core 2’s life cycle, and at the height of the “green” computing boom, Intel introduced low-power variants and denoted them with the help of an “S” at the end of the model name. That scheme has been brought back once again with this Sandy Bridge launch, with three different “S” models to be made available at launch, or shortly after.

As expected, the Sandy Bridge “S” models feature lower stock frequencies, but identical Turbo frequencies. In addition, the TDPs have been lowered, and prices raised (although pricing is being kept a secret until the parts hit retail). For the most part, the “S” models haven’t been too confusing, as there were either non-S or “S” models… normal or low-power. Nothing too hard to grasp.

In the spring of last year, though, Intel decided to spice things up by releasing “K” models. They were unlocked chips, designed for overclocking, and also have been brought to the Sandy Bridge launch, with two models immediately available.

To spice this launch up a bit more, a brand-new suffix has been added, “T”. This is a bit different, because like the “S” models, these don’t feature lower TDPs, but do feature lower clock speeds… and that includes the Turbo. At the same time, the GPU is cranked up, which in the end, helps round out the TDP numbers.

It can be a little confusing, but to sum up…

Pricing for both the “S” and “T” models is being hidden at the moment, but once we become aware of them, we’ll post about it in our news section.

To talk further about the “K” model, we can refer to the following slide. Non “K” models will be restricted to an increase of the Turbo multiplier up to 4x, while “K” models can see their Turbo multipliers cranked to about 20x past the stock. On a 3.30GHz CPU, that would bring things to 5.7GHz, which is more than enough for most people. For the hardcore overclockers out there, going higher than 5.7GHz would require a boost of the base clock, which for Sandy Bridge is 100MHz. 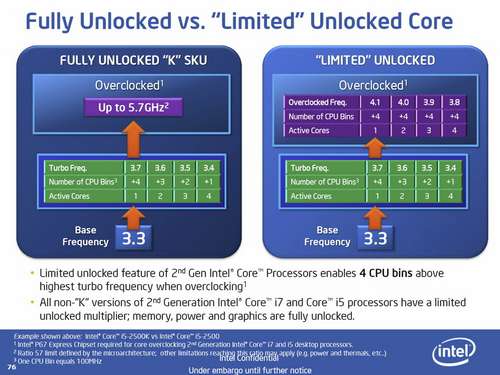 Last week I posted a simple question to our news section, “What’s UEFI, and Should You Care?”. I recommend reading it because it’ll tackle a bit more information than I will here, but the listos is that the UEFI is a BIOS replacement. It’s more capable, looks better, and is faster.

Here’s ASUS’ implementation of UEFI on its P67 line-up: 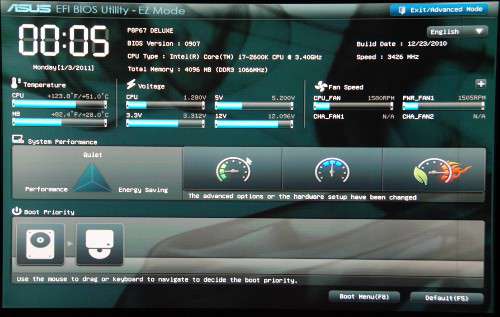 UEFI can feature a full graphical interface, and defaults to the “safe” resolution of the monitor, which will differ from model to model. In my case, my 30″ 2560×1600 display defaults to 1440×900, so that’s the resolution UEFI ran at for me. As you can see in the shot above, the UEFI BIOS looks almost like a full-screen Windows application. It features full color support and is very modular.

Note the boot priority at the bottom. This is one of my favorite features, because rather than use the + and – buttons to change priority, here you simply click on any drive and move it around. It’s amazingly simple, and intuitive. If you want low-power computing, or a minor overclock, you can even click one of those respective options, then reboot. Of course, it’s hard to ignore the easy-to-read info bits, such as the CPU temperature and voltage levels.

This is just the start screen for the BIOS, and I haven’t taken a screenshot of the rest of it. But once into the “Advanced Mode”, the layout is similar to the BIOS of old, except it has the same graphical detail as the main screen. Overall, UEFI has major potential, and so far, implementations I’ve used have been an unbelievable step up from the bland blue screen we’re all used to.

Alright, trends aren’t all that interesting in a CPU article, I realize, but this one is different. Intel included a slide that showed off desktop market forecasts, and as we tend to focus a lot on the desktop, it’s an important slide to pay attention to. 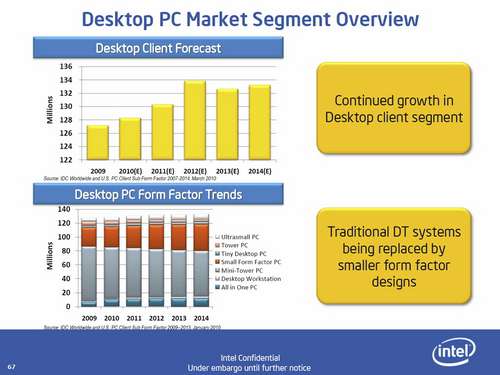 Some have been declaring the death of the desktop for a while, but according to these predictions, there will be no such thing. At least soon. According to IDC Worldwide, desktop usage will peak in 2012, then decrease in 2013 and again increase in 2014. Strange, but I’ve learned it’s better to not ask questions.

Split down into form factors, the rise of “small” designs is going to be rising for quite some time, but that’s of no real surprise. The “Mini-Tower PC” (mid-tower) has had its usage decline for the past couple of years, but it appears that after squinting at the “Desktop Workstation” segment, it might increase in adoption as the years go on, just slightly.

The “Tower” PC, which I assume means full-tower, is also going to see an increase, like the Desktop Workstation. That’s quite interesting, because while mid-towers are on the decline, towers and workstations are on the incline? That’s not what I would have expected. And of course, “Ultrasmall PCs” and “All-in-Ones” are on a path to some nice adoption in the years ahead.