Interview with Tom Anderson of Novint

Over the past few years, one of the most interesting pieces of hardware that we have looked at has been the Falcon from Novint. Originally seen at the 2006 GDC in San Jose, the Falcon instantly grabbed our attention with not only its unique design, but more importantly, the features that made it unquestionably original.

What the Falcon does is essentially allow the user to “feel” objects in a game through a hand piece, called a grip, that sits in front of the body of the device. Connected to three servo controlled arms, the grip is equipped with 4 buttons and can remarkably be moved not only side to side and front to back but also up and down as well.

With this full range of motion and the software controlled servo motors, programmers can now give any object in a program a haptic or touch value. This value can give water an accurate resistance when an object is moving through it just as it can give a sheet of ice its slippery feel when moving across it. Itâ€™s these examples that we saw firsthand in our test drive of the Falcon at the GDC in 2006 as well as CES this past January.

Founded in 2000, Novint has only recently turned their attention to the hardware side of things. Prior to the Falcon, Tom Anderson and his teamâ€™s primary focus was on designing the software used to drive the top dollar hardware in scientific, military, mechanical and medical simulators.

When they felt the time was right, Mr. Anderson and Walter Aviles (Novintâ€™s CTO and VP of engineering) started development of the Falcon. Named after the bird of prey that hunts and feeds off of mice, the name is a clever one and clearly points out what Novint is looking to do with the device. 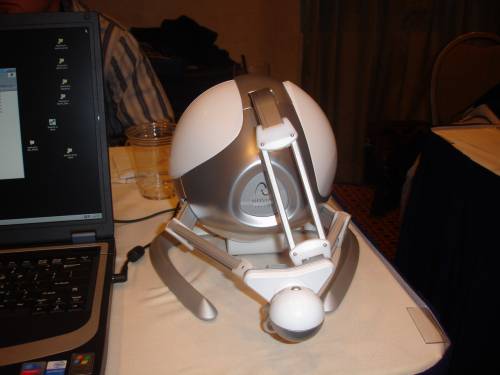 The initial shipments of Falcons are set to go out on the 18th of June and with that date quickly approaching, Techgage was able to steal half an hour of Novint CEO Tom Andersonâ€™s time and ask him a few questions and to see where he saw things going. Conducted by phone, this is what Mr. Anderson had to say. 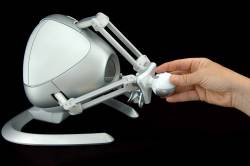 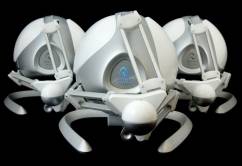 Techgage: The Falconâ€™s primary advantage over other PC peripherals is that its approach uses haptics. For those who might be unfamiliar with this technology, could you please explain what it is and how it applies to the Falcon?

Tom Anderson: In essence, haptics is simply the sense of touch. With the Falcon, we are using haptics to give the user a true sense of a three dimensional environment in which they can actually interact and feel their surrounding in a game.

The Falcon provides detailed 3D touch by accurately keeping track of the cursor on the screen by using not only the X and Y axis, but the Z axis as well.

TG: Pre-orders began a few months ago and have since sold out. Are you able to give us a number of how many original units were up for grabs initially?

TA: While I cannot provide any exact numbers, we are working closely with our manufacturer in China to re-supply our inventory so we can keep up with demand for the Falcon. 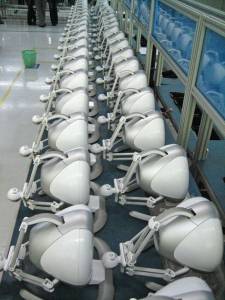 TG: When compared to a regular gamerâ€™s mouse, the Falcon has a lower DPI. Is there a reason for this?

TA: First off, the comparison between the Falcon and your everyday mouse isnâ€™t exactly an accurate one. In games such as HL2, when using the Falcon, the scaling rate can by adjusted to the needs of the individual gamer and the use of force feedback and a combination of mouse control and joystick control in different regions of the workspace, we believe, will make it more powerful than a mouse.

In our experience with the Falcon, Rob and I both played around with the it in Half Life 2, there wasnâ€™t any noticeable difference in cursor speed. The only significant difference between using a mouse and a Falcon, aside form the obvious use of Haptic, is that when using Novintâ€™s device, when the player reached the side of the screen, there was a slight rumble in the hand set but the screen continued to rotate in the direction the player was moving.

TG: With its detachable hand piece, the Falcon appears to be ideal for attachments. Do you have plans to release any add-ons in the near future such as a pistol grip for use in 3D shooters?

TA: Of course! There are many attachments that we can see users enjoy using. Of course the most popular genre of game right now is first person shooters and the development of a pistol grip makes the most sense. We plan to take our different ideas and expand on them to make them a reality.

A few different ideas that we have been throwing around is the use of a wheel. Force feedback isnâ€™t a new technology but with the Falcon, the ability to add lateral movement to a driving game could be incredible. Another idea is a billiard cue. Imagine feeling the weight of the cue stick and the impact of hitting the cue ball.

Another direction we would like to go is adding internal memory into the grip itself. Imagine detaching your grip, taking it to a friends house, plugging it in and being able to not only use your saved games, but also your custom settings. There are so many ideas at this point and all of them we are taking seriously. We are looking forward to launch and getting feedback from the users.