With the growing popularity of SSDs, it’s no surprise that some company came up with the idea to allow regular users to upgrade their PCs with little risk. So when Kingston approached me with the article idea, I couldn’t help but agree to take it for a spin, and I’m glad I did. Although there are a few caveats, all of which are mentioned on the second page, as long as you don’t mind taking the necessary steps to prepare your PC, you’re golden.

As of the time of writing, I couldn’t find a Kingston 80GB SSD without this kit, but as a kit, it’s available for $345 at Newegg, or $669 for the 160GB drive. By comparison, buying the same SSD from Intel costs $315 at Newegg, so with this kit, there is an obvious premium. For that premium, you get software that can both back up a drive and also clone, along with an enclosure you can use to create a USB-based external storage device.

For those looking to upgrade to an SSD without re-installing your entire OS, this is definitely the way to go. Although I wish the Acronis software would allow cloning a partition rather than the entire drive, it’s understandable why such a feature isn’t included, and as I mentioned earlier, it’s a lacking feature that’s likely to effect few. Plus, it might not even possible to have this option, due to how the master boot record works. I couldn’t get a response on the matter from Acronis prior to publishing this article.

Another huge bonus is that after you clone your drive, the software isn’t suddenly useless. You can use it later to back up the entire drive if you want to, or create a drive image that you can reload each time you want that feeling of a brand-new OS install. 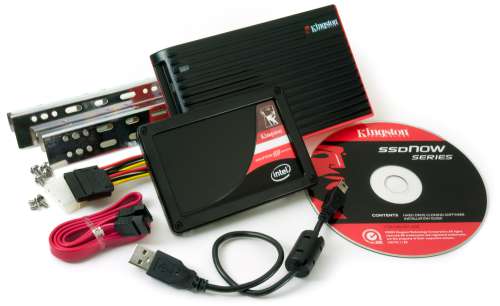 SSDs today are far more affordable than they were just six months ago, and that fact is improving all the time. The day when we all have SSDs as our main OS drive is one that will be filled with relief, because finally, we won’t have our computers bogged down when doing more than one thing at once, due to issues with the I/O. That’s not to say that SSDs are exactly affordable either, because at 80GB for $345, the storage per gigabyte is far more expensive than a mechanical hard drive. But of course, you don’t get this performance with a mechanical drive, either.

Whether the premium for this kit is worth it is up to you, but I’d say it is. To be able to upgrade your PC to an SSD without re-installing the OS is a great thing. Depending on how much you have to copy, you could literally sit down, clean up, and an hour later be using your same OS and applications on an SSD. That, is convenient. Plus, you get the bonus of an enclosure for your mobile drive after the fact, so no storage goes to waste!

Cloning operations are full clones, so itâ€™s all or nothing. You cannot clone an individual partition from the OEM version, Home version, or the corporate versions.

The only way to successfully perform the operation listed below is via a restore-so you must take an image-save it to some location, then do the restore. When you do a restore you have the option to resize partitions, so if there is actually enough free space available on the source disk, you may be able to resize enough to get everything onto the SSD, it all depends on space.

The only other consideration is if the SSD is being placed to the same controller (it seems like it is). If it is onto another controller then Acronis Universal Restore will be needed.

Keep in mind that we can store images to all sorts of locations, from CD/DVD, to USB drives, to Network locations such as NFS shares, Samba shares (normal Windowâ€™s shares), SAN/NAS, and also FTP. The compressed image will be 40-60% of the used space of the 320GB disk, so you would need at minimum 160gb available to store the image file, Iâ€™d suggest a 200gb disk or share if available.