There’s nothing fancy about installing the FC8. I found that attaching any fan or the cable extensions before installing the unit made things easier seeing how I was not trying to fit my gigantic hands into the 5.25″ bays in order to make the connections. Once the main unit was in place, it was secured using the included screws. Each 4-pin Molex connector was wired up to a separate connector directly from the power supply and the end result looks like this when installed in the AZZA Toledo 301 mid-tower that was reviewed recently. 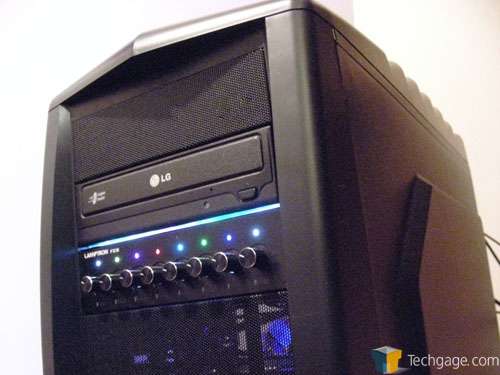 Our motley crew of fans are back again to see if the FC8 can do what it was designed to do. We have brought back that crazy little 60mm Delta AFB0612EH and the CoolIT-branded 120mm fan from the Vantage ALC. The SilenX IPX-74-14 from the last round of testing has been replaced by a Coolink SWiF2 120P with power for the tests being drawn from an Antec TP-750 Blue. Just as before, testing was performed outside of the case for simplicity. 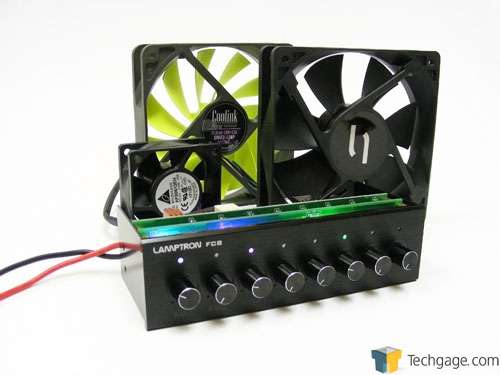 The Delta runs at an always scary 6,800 revolutions per minute (RPM) and moves 38.4 cubic feet per minute (CFM) of air at a screaming 46.5 A-weighted decibels (dBA), while the CoolIT fan is a bit of a wild card. Very little is known about it but specs from the website show it is rated for between 1,100 and 2,500 RPM. From experience, this fan can get quite loud if left to spin up to full speed. The new Coolink fan claims to be able to move just over 74 (CFM) at a maximum of 1300 (RPM) while creating 27.1 dBA. 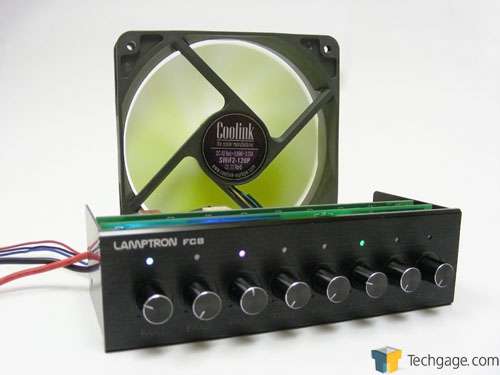 Each fan displayed similar results when compared to the outcome of the tests using the FC Touch. The Delta sprang to life and skipped across the table at about 33% but was far from quiet. I was surprised when the CoolIT fan started up at about 45%, which is slightly lower than with the previous controller. Finally, what may be my new favorite fan, the Coolink was completely silent when spinning at less than 50%. It even made less noise than the SilenX fan it replaced while pushing what felt like more air.

This all adds up to nearly identical performance when compared to the FC Touch, which scored very high marks in the review. While this isn’t a product comparison, it is nice to have a great product like the FC Touch to use as a baseline and while it would be nice to load each channel up with four Delta’s, that just isn’t indictative of what the average user will run on this controller. 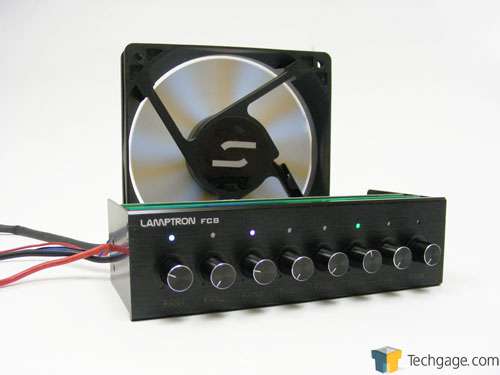 Switching LEDs was an easy task as well and what I thought would be a cumbersome, clunky method turned out to be quite intuitive. Pressing in on the eighth knob selects the channel so one press selects the first, two presses selects the second and so on. When a channel has been selected, that LED will blink. If a different colored LED is desired, pressing the first knob will cycle through them. If left alone for ten seconds, the selection is locked in. The LEDs are also bright enough for users to see them if installed into a case that is tucked under a desk or on sharp angle but not so much that they light up the room or become intrusive.

All of this adds up to another great offering from Lamptron, so let’s call it a day.