We recently tested the least-expensive member of Logitech’s new G line, the G100s, and it impressed us enough to earn one of our Editor’s Choice awards. Today, we have a look at the higher-tiered G500s. It’s an altogether different animal compared to its less-pricey sister, so let’s find out if it impresses just the same.

All you need is one look at the Logitech G500s and you’ll probably come to the same conclusion as me: This looks familiar.

No, I’m not talking about the design of the graphics Logitech has slathered on all of its G gaming mice. Clearly, as part of the company’s desire to unify its gaming-oriented line under a single coherent banner, its products now wear the same uniform as far as decorative graphics go.

Look beyond the decorative garishness and you’ll see what should be a familiar shape. 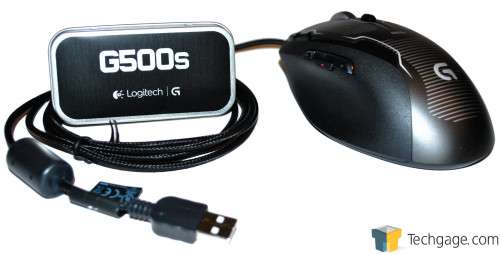 You shouldn’t view the G500s as an all-new gaming peripheral. Rather, think of it as the next evolutionary step in a very long line of successful (and oft-copied) gaming mice from Logitech. The line stretches too far back into the early 2000s for a detailed discussion in this review, but here’s the key detail: The design concepts behind the G500s are so fundamentally sound, the company never gave thought to conceiving a revolutionary redesign.

In other words, if it ain’t broke, don’t fix it.

That’s not to say any of the G500s’ ancestors were perfect. Then again, if previous iterations of this design were flawless, there would be no need to evolve and improve.

Which brings us to this review of the G500s.

Let’s start by having a good, detailed look at it, then. 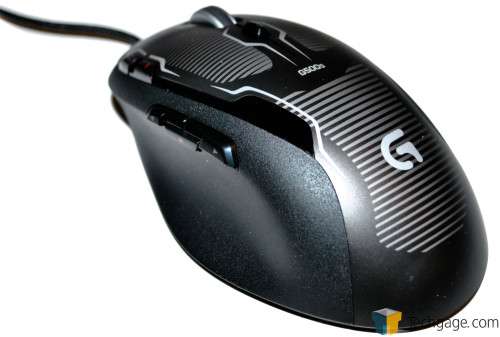 The G500s has a familiar yet distinctive shape. Unlike the ambidextrous G100s (our review), this is a right-handed mouse. The top left side of the mouse is slightly elevated, and its left flank is sculpted to allow your right thumb to rest comfortably within a curvaceous groove. It’s worth noting here that its flanks are also covered in a textured, grippy surface. The shape and angle of the mouse’s dorsal surface lends itself most naturally to a palm-style grip, though it’s still possible to use a claw-style grip quite comfortably. 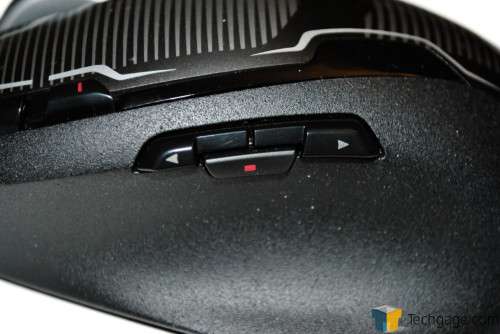 Logitech says that this mouse has ten buttons. Initially I could only account for the seven most obvious: Left and right click; scrollwheel click (down); DPI up and down, at the front left of the mouse a few millimeters off of left click; and two thumb buttons. But there are also a couple of distinctive button positions as well. Under the two thumb buttons is a third thumb button. Also, there are two additional clickable switches at the scrollwheel: You can click it to the left and to the right. Functions for the buttons can be left at default if you so choose, but you can also configure these functions through the LGS (Logitech Gaming Software). 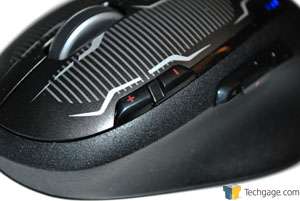 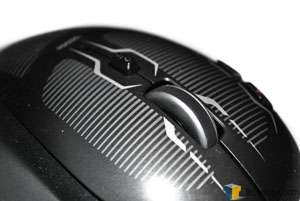 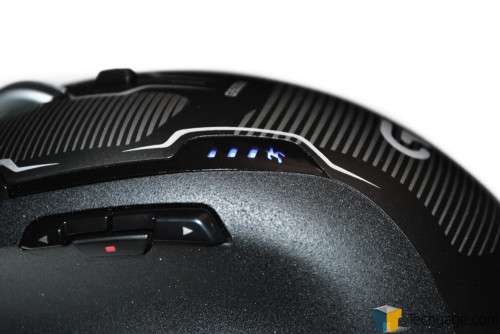 This mouse doesn’t have a lot of LED bling on it, but what it does have is absolutely functional. Right in the groove where your thumb and index finger meet is a dark smoke-colored translucent panel, under which are the DPI setting indicator LEDs. This is a handy visual cue that will let you know which DPI setting you currently have active. 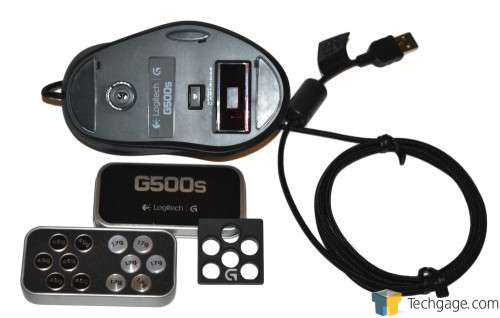 Flipping the mouse over we can see the emitter for one of the G500s’ improvements over its predecessor: A “gaming-grade” laser sensor with a DPI range of 200 – 8200. Techgage couldn’t find more specific information regarding this upgraded sensor at the time of writing. 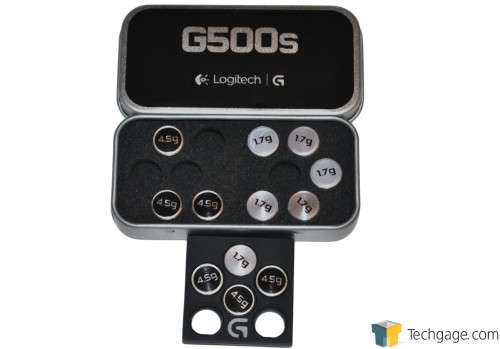 Also under the mouse is an ejectable cartridge for the tiny weight discs with which you can change both the weight and center of gravity of your G500s. You can add up to a maximum of 27 grams of extra mass. 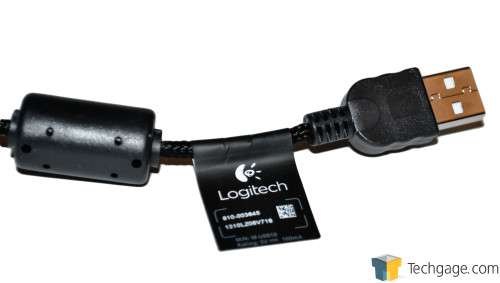 Our visual tour of the G500s concludes with a look at the USB cable. It is braided (unlike the G100s) and flexible. Otherwise, it is not particularly noteworthy (not that this is a bad thing).

Now, let’s have a look at the LGS.