Logitech released its MX Master desktop mouse to much fanfare a couple of months ago, so it did what any reasonable peripheral vendor would do: shrink it down. That perfectly describes the MX Anywhere 2, a mobile mouse that packs in all of the features a desktop mouse should. The big question: is it worth your $80?

Logitech’s latest mouse came out of nowhere last week, and so did our sample. I’ve been a fan of Logitech’s mobile mice for quite some time, so I was anxious to dig into this one, and see if its $79.99 USD price tag was warranted.

Yes, that’s $79.99 for a mobile mouse, though it might be more appropriate to call this one a “luxury mobile mouse”. It packs in a bunch of features we’d expect to see on high-end desktop mice and simply do not see on mobile mice. Few mobile mice have side buttons, but this one does, and that’s just the beginning of its beefy feature set.

One of the things that sets this mouse apart from the rest is that it includes Logitech’s hyperfast scroll wheel, something first featured in 2006 with the MX Revolution. For those not familiar, clicking in this wheel will uncap its speed, so you can explore webpages or documents very quickly. It might not sound like a feature you’d take advantage of, but you could be surprised – I thought the same thing before I tested out the MX Revolution all those years ago.

Other features I’ll tackle over the course of this review include gestures, USB charging, multi-device support, and customization options.

A Tour Of Logitech’s MX Anywhere 2

There’s no denying that the MX Anywhere 2 is a premium mouse, but it at least looks the part. Unlike most of Logitech’s other mobile mice, this one comes in a single color, and while it might not be for everyone, it does look good. The bulk of the mouse’s face is made up of black matte plastic, while the bronze trim is a bit more slippery (not that you’ll ever need to touch it). The thumb rests are a bit rubbery with an artsy triangular design. 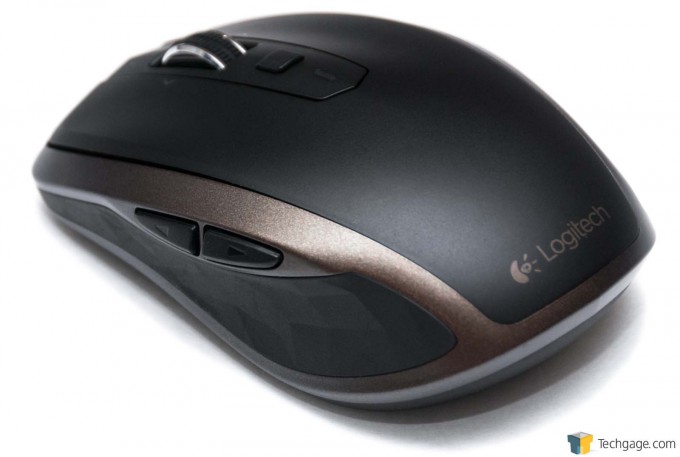 In the shot above, we can see the first rarity on mobile mice: side buttons. Logitech doesn’t label this mouse as an ambidextrous one, though from all possible angles, it looks like one to me. What could frustrate lefties is the fact that the side buttons are only on the left side – otherwise it should still be comfortable to use. 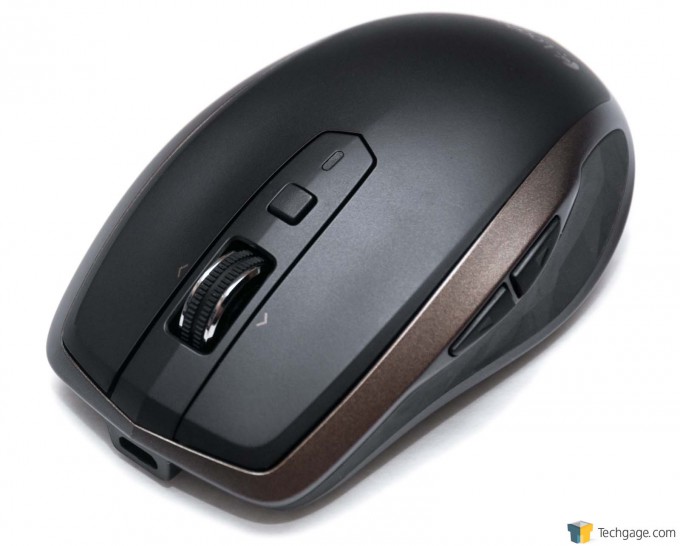 Above, both the hyperfast scroll wheel and gesture button can be seen. In its default mode, this scroll wheel can scroll at an expected pace, but once it’s clicked in, it activates “free-spinning” mode and can bring you from the top of most pages to the bottom very quickly. This can prove extremely useful for those who regularly deal with long documents (developers come to mind). As if that didn’t add to a wheel’s usefulness enough, it can also be clicked left and right, for side scrolling (or some other basic function.)

The button below the scroll wheel is used for gestures, and while it looks simple, it can activate up to five different actions, effectively giving the MX Anywhere 2 a bunch of extra virtual buttons. 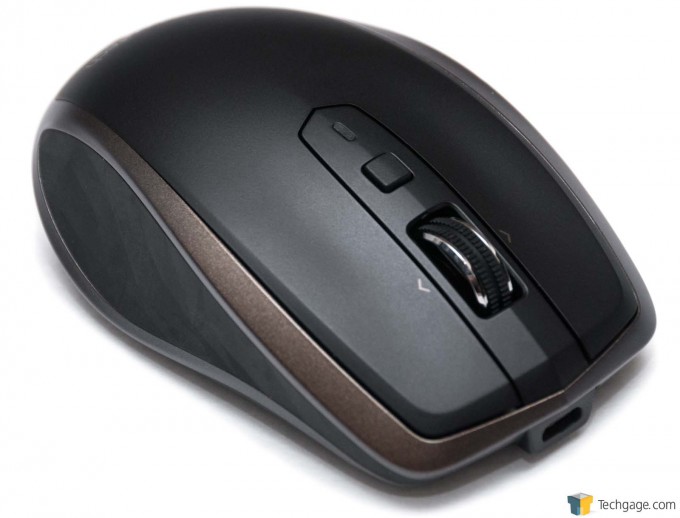 At the bottom of the mouse we can see a couple of different buttons. Near the top is the power switch, and right below that is “Connect”, used for connecting the mouse to a Bluetooth device. At the bottom is a switcher, and one that makes this mouse a lot more unique than most. You can use this mouse on up to three devices at any given time, and it’s this switcher that will allow you to easily move between them. 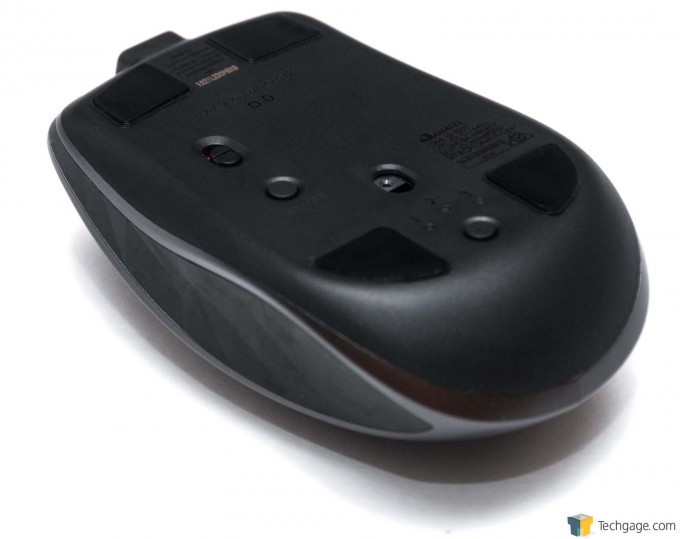 With a full charge, Logitech claims that the MX Anywhere 2 can last for up to two months. If the battery is low, you’ll be able to plug it in and gain 2 hours of life per 1 minute of charging. Out-of-the-box, Logitech’s Options software told me the battery-level was “Low”; after a single hour of charging, that changed to “Full”. It wasn’t really full, however, as keeping it plugged in continued to charge it. After about another forty-five minutes, the charge light stopped pulsing.

A great thing about this mouse is that to charge it, you simply need to connect it to a USB port via a microUSB cable. What makes this “great” is that many of us will have these cables kicking around already, so if for some reason you misplaced the cable that shipped with the mouse, you probably have another one you can use. In the shot below, you can also see the ridiculously small USB receiver, which isn’t much larger than a completely bare USB connector. 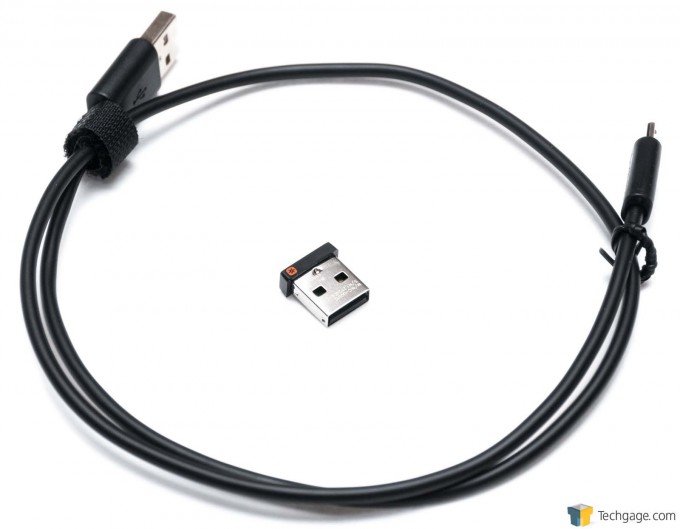 I didn’t have the original Anywhere Mouse MX, but I have had the Zone Touch Mouse T400 and Wireless Mouse M320, so here they are in comparison to the new MX Anywhere 2:

I love the solid colors of the first two mice, but I do admit neither of them hold a candle to the aesthetics of the MX Anywhere 2.

Configuring The Mouse With Logitech Options

The MX Anywhere 2 doesn’t ship with software, so to configure the mouse, you’ll need to head on over to the official support page and snag Logitech Options. After the quick install, you’ll be greeted with a simple, yet informative screen.

Clicking on one of the green blips will allow you to configure that particular button, and as usual, Logitech provides a huge number of options. By default, the front side button is to move forward in a Web browser. but you could configure it to act as a way to close a window, open up Documents, execute a keystroke pattern, open a media player, or even act as a volume control. If you’re seriously brave, you could even click that button to shut down your computer! 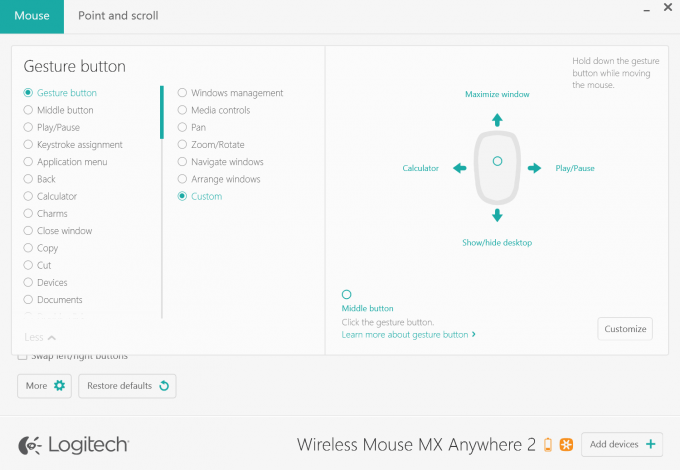 Each gesture button supports the basic directions: up, down, left, and right. The default action of the gesture button is to act as a middle click (useful given the special scroll wheel takes that away); holding it in will maximize a window when moving the mouse up at the same time, or show the desktop if it’s moved downward. Holding it in and sliding the mouse to the left or right while inside of an app will snap it to the left or right-side of the desktop.

In the shot above, you can get an idea of the level of customization here. I configured the mouse to open Calculator if slid to the left, and play or pause my music if I slid it to the right.

Again, each gesture button can have up to five functions (which could include the default function; eg: forward, back), which gives us a total of fifteen simultaneous  functions if all three possible buttons are turned into gesture buttons. If I have one beef, it’s that the snap (to the side) feature isn’t available outside of the default configuration, but that’s an overall minor complaint given the mouse’s flexibility allows you to easily work around that. 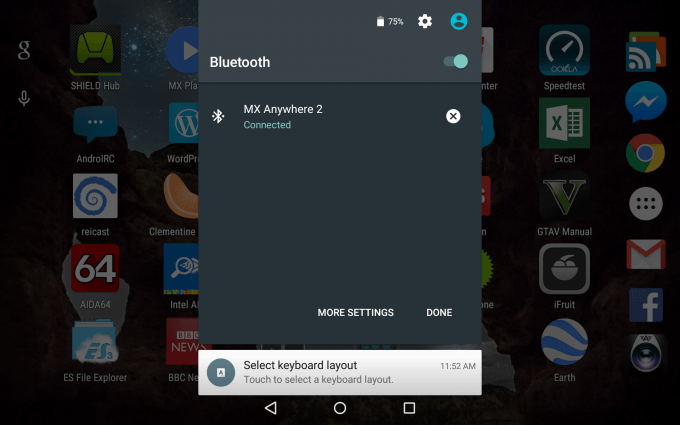 As I mentioned during the tour of the mouse, there’s a switcher button on the bottom that will let you easily switch between three different devices. In the above shot, you can see I have the mouse assigned to my tablet, and the setup process was dead-simple: enable Bluetooth, hit the Connect button on the mouse, wait for the MX Anywhere 2 name to pop up, and then tap it to pair it up. Mobile OSes are well-designed for mouse use even if the rodents are not that commonly used. On this Android tablet, the mouse felt right at home.

As I said in the intro, the MX Anywhere 2 is an $80 mouse. That’s a price that’d be a bit hard to stomach for most desktop mice, so to see that price tag strapped to a mobile one is something else. That’s 2.5x more than the Wireless Mouse M320, and $20 less than the full-blown MX Master. The big question, then: is $80 justified?

That, of course, is a question that can’t be easily answered. I just mentioned that this mouse costs about 2.5x more than the M320, but looking over all of its features, I believe the MX Anywhere 2 is 2.5x the mouse. 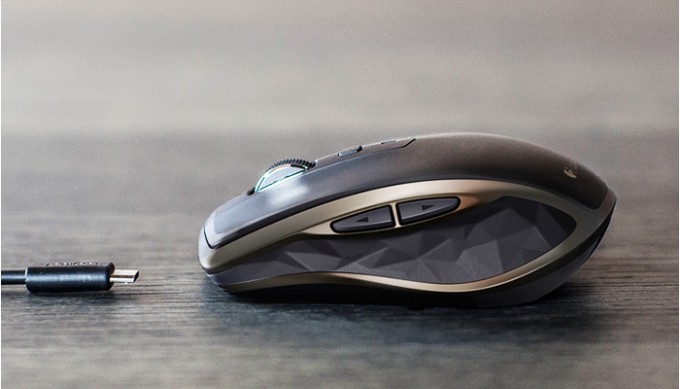 What this mouse offers that most don’t are gestures (which are even easier to use than trackpad-based ones), a hyperfast scroll wheel, a scroll wheel that can be clicked left and right, the ability to charge with any microUSB cable, multi-device support, and a lot of flexibility thanks to the Logitech Options software.

If you’re a mobile warrior that needs a quality mouse but doesn’t want to lug around a full-fledged desktop mouse which may not even be feature-comparable to this one, I’d highly recommend considering this mouse. If you’re a desktop-dweller, it’d make a lot more sense to splurge the extra $20 for the MX Master.

I am the type of person who refuses to use anything but a full desktop mouse when away from home, regardless of how much space it hogs, but the MX Anywhere 2 becomes the first mouse to ever make me change that. It’s so full-featured, I’d be perfectly happy with this mouse enough to leave the bigger one at home.

It’s pricey, but the MX Anywhere 2 is a really good mouse.