To become a competitive gamer, you must spend big. Right? We’re talking the biggest graphics cards, table-sized motherboards, mega-core CPUs, copious amounts of RAM and of course, gaming mice equipped with LCD screens, the brightest LEDs and a CPU in their belly. All that good stuff… right?

Wrong. At least, that’s Logitech’s stance with its G300 gaming mouse, which comes in at a mere $40. Like some offerings that cost twice as much, the G300 aims to deliver an easy-to-use mouse that’s packed with potential – and to make sure everyone can take advantage of what it offers, it also features an ambidextrous design.

There are few companies as experienced as Logitech where gaming peripherals are concerned, and at one point, the company set the benchmark for what a gaming keyboard or mouse should offer. I still have fond memories of the MX 518, and my recently retired G3 – that one being the original variant of the G300. With all of Logitech’s experience, does the G300 become the no-brainer gaming mouse? Let’s evaluate that possibility together.

Out of the gate, I must mention that the G300 is not for those who can’t use (or stand) smaller mice. This is in fact an overglorified notebook-sized mouse; smaller than the G9X in both width, length and height. That said, while I found the mouse troublesome at first, it grew on me fast. I’m at the point where I don’t even notice it, though it’s going to be awful difficult to go back to my previous mouse, the SteelSeries Sensei!

The G300 is comprised of a gray-colored matte plastic front with glossy pitch-black plastic accents. Aside from the scroll-wheel, the thumb rests are the only rubber pieces on the mouse, with a light textured design that helps give you a good grip – even while sweating (I had to do a single jumping jack before testing this out). Finally, there’s a slightly glossy red bottom that closely matches the plastic used for the feet. Overall, a good-looking product. 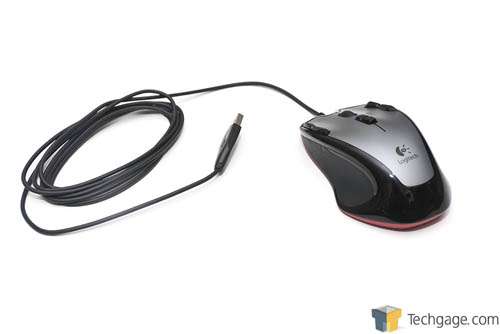 Most ambidextrous mice aren’t so catering with their button layouts as the G300 is. Split right down the middle, this mouse is appropriately symmetrical. 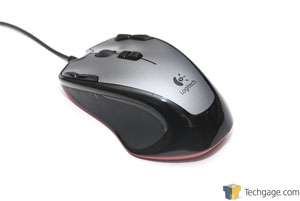 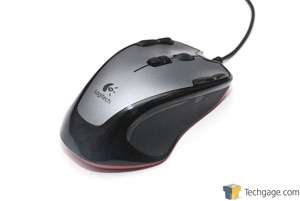 Yes, I promise I didn’t simply mirror one image.

Taking a look at the front, we can see the six buttons that surround the scroll wheel, each able to be configured as a function, keyboard button, keyboard shortcut or macro. 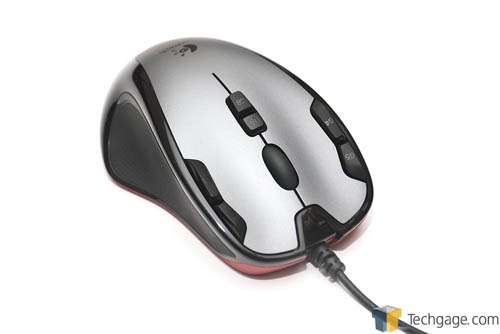 Under the mouse we find a bright red base, which, to be honest, is bizarre. Though the bottom isn’t that easily noticeable, it is visible without lifting the mouse. It clashes greatly with the rest of the aesthetic appeal the G300 created. 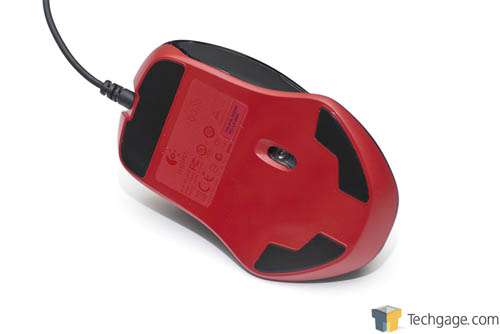 The G300 features dedicated LEDs on both sides of the mouse that represent the currently-selected profile (one of three). The default colors are red, blue and green, but white (more like a super-light blue), yellow, purple, light blue and black (off) can also be used. 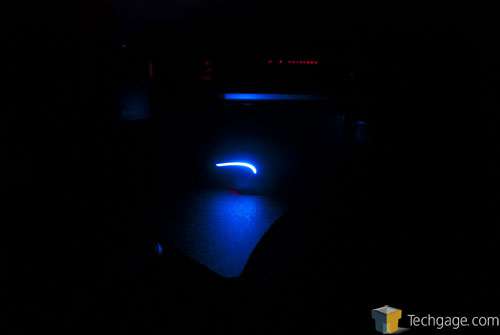 The G300 overall looks to be a feature-packed mouse at its price-range, so let’s go a bit further and check out the included software, and then wrap up with some final thoughts.