Logitech debuted their G-series gaming peripheral line back in mid-2005, building upon the success of their MX-series high-performance mice with a full line of peripherals targeted specifically toward gamers. The line was soon populated with a slew of gaming input devices, including the popular G5 and G9 gaming mice and the spectacular G15 gaming keyboard.

The addition of gaming audio products to the G-series breaks with the trend of gaming input devices already in the G-series, however on another level it’s a perfectly logical addition as Logitech devotes effort to gaming-oriented products in every key market that the company serves. The first high-performance gaming audio product to join Logitech’s G-series is the new G51 speaker system, which provides 5.1-channel surround sound that’s specifically tailored to the needs of gamers.

While I half-expected Logitech to create a derivative of their ultra-powerful THX-certified Z-series flagship audio systems for the G-series, it appears that the design of the G51 is actually derived from their very successful X-540 system, which was known for shattering the $100 barrier for an affordable 5.1-channel PC speaker system.

A quick look at the spec sheet, however, reveals that the G51 is more than a simple design refresh of the X-540; the G51 system contains several notable improvements in features and performance, essentially creating a middle ground performance option between the value-oriented X-series speakers and the cost-no-object horsepower of the Z-series. 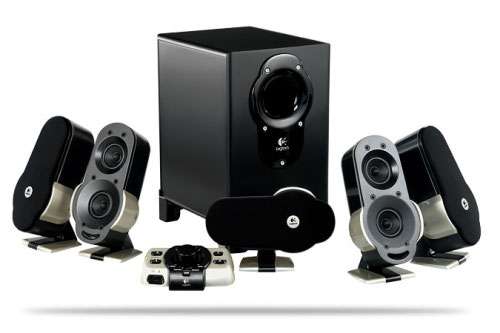 So what exactly makes a so-called gaming audio system well-suited to the task of gaming in the first place? First of all, ‘gaming’ audio is no excuse to slack off in the area of fidelity – while it doesn’t take much to reproduce transient sounds like gunfire and explosions with impact and clarity, game audio also frequently incorporates dialogue as well as some music. It’s also important to ensure that multiple sound effects occurring at once are distinguishable from one another.

Second of all, a ‘gaming’ audio system needs to have enough headroom to reproduce the transient stuff. A system with limited dynamic range can still reproduce gunfire and explosions, though more subtle details may be lost, which may cause you not to hear softer sounds like footsteps sneaking up from behind. A gaming audio system should have enough headroom to preserve relative loudness between gunfire bursts and softer environmental noises while reproducing the soft stuff at a volume which is still audible.

Finally, and this is the big one, a gaming audio system needs to have enough resolution to create a seamless, immersive sound field that allows you to pinpoint the origins of sounds in two-dimensional space – in front of you, beside you, and behind you. Sub-par speaker systems have a ‘closed-in’ sound, where it sounds as if the speaker itself is the source of the sound, instead of virtually recreating another point of origin in space.