Looking for the ultimate gaming mouse? Logitech’s latest G9 offers a lot… and then some. Included is a switchable body, color-changing LEDs, 3200 DPI capabilities, MicroGear scroll-wheel, braided cable and much more. The question: Is it worth your $99?

If you were to ask me to jot down the first word that comes to mind when someone brings up Logitech, it would most certainly be prolific. There aren’t many peripheral manufacturers in business who can match the product refresh cycle that Logitech seems to maintain quarter after quarter. With that said, the same company that has built a strong following in the gaming market with their stable of “G” series hardware was at the center of quite ruckus when earlier this month, pictures of their updated gaming mouse and keyboard surfaced on the ‘net.

In a thread in our forums, we even discussed whether or not Logitech would really move away from their tried and true kidney bean form and press on with the aggressive looking G9. Some thought it was initially a fake but sure enough, as many leaked pictures turn out to be, they were absolutely accurate.

In an attempt to cater to the fanatical gamer in us all, Logitech has abandoned the kidney shaped, ergonomically designed mouse of the past and instead decided to bring the radically shaped G9 to market. It would seem that outside of the new shape, Logitech has built a Frankenmouse using bits and pieces from their incredibly popular G series of mice. Back are the adjustable weights for those who like the feel of a weightier mouse. Gone are the wireless capabilities of the G7 because nothing pisses you off more than marking up a frag on account of your dead battery.

Having learned from the mistakes made on the original G7, Logitech has now added a forward thumb button to the side of the mouse. Not ones to discriminate, Logitech even took the stellar “MicroGear” scroll wheel found on the Revolution series of mice and threw it into the G9. Looking past the design differences, the G9 is honestly a mouse built out of the best features in most of Logitech’s already terrific lineup of mice.

Not everything on the G9 is recycled technology however. The entire exterior body of the mouse can be switched out dependant on the preference of the user. Switching between the two provided shells gives the user a significantly different feel with one being wide and the other a bit more slender. The G9 also ships with a significantly more powerful laser engine underneath. Fully adjustable up to a ridiculous 3200 dpi, and all the way down to a glacier slow 200 dpi, the laser engine is more than accommodating to all types of gamers.

On paper, the Logitech G9 appears to be a no nonsense mouse geared specifically for gamers. Let’s look a bit deeper to see if this mouse is more than just an edgy appearance and borrowed features.

In true Logitech form, the G9’s packaging looks almost identical to every other mouse that we have reviewed from the company. With an opened center, we can see the G9 encased in its plastic shell. At the bottom, we can see the Windows Vista Logo. This might interest those of you who are running the operating system, however, in the review; we are using the G9 on a XP desktop. 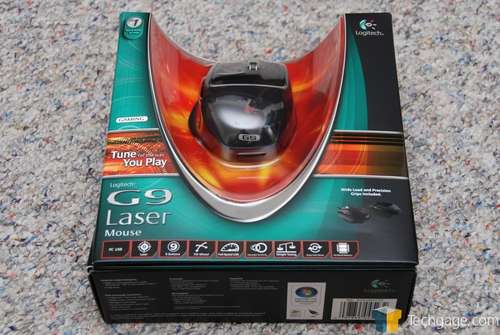 Opening the box up, we can see the additional grip that comes included. As we stated earlier, one grip provides the user with a wider mouse while the other is a bit more slender. It should be mentioned that both grips are made out of different materials. The wide grip has a satin finish to it, supposedly to add to the comfort of the user when in use. The slim grip is coated with a “DryGrip” material which is suppose to help reduce the feel of a sweaty palm in long gaming sessions. 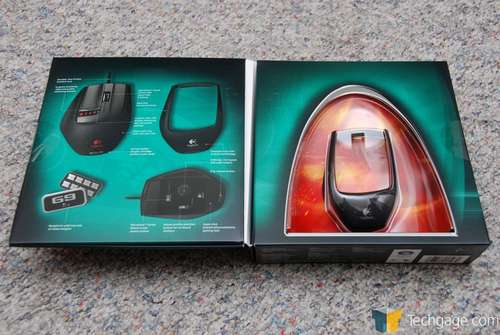 Like all Logitech mice, the G9 comes with a manual to help the user get quickly acquainted with their newest purchase. Also included, and not found in all Logitech mice, is a set of eight weights. These can be used to add an exact weight and feel to the mouse, dependant on the user’s needs or preferences. There are a total of four 4g weights and four 7g weights, giving the user the ability to add as much or as little as the want. There are four spots on the mouse itself to add up to 28g of addition weight to the back end of the G9. 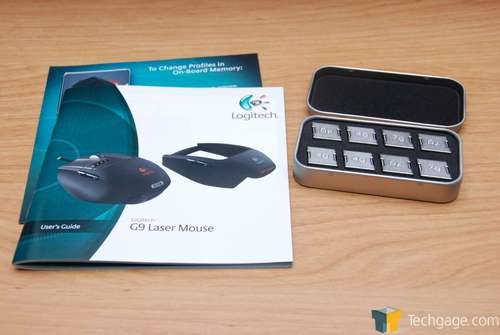 The packaging and accessories are not too exciting, so let’s jump right into a look at the mouse itself.