by Jamie Fletcher on September 4, 2012 in Peripherals

Just when you thought you had all the buttons you could ever need, along comes an MMO that slaps you in the face with a combat rotation thought up by a guy with three arms. Enter Logitech’s 20 button monster, the G600. Read on as we attempt to find out if it’s possible to tame even the most complex battles with such a mouse.

It’s been a long time since we last reviewed a Logitech peripheral, but this doesn’t mean the company has been resting on its laurels. In what appears to be a bit of a craze at the moment, we have under review another MMO-based mouse. Sporting a monstrous 20 buttons, the G600 is certainly an impressive mouse to behold.

First impressions are that of a mouse that is both stylistic and functional. Clear separations between buttons with an almost claw-like grip. Despite the number of buttons that are made available, the mouse remains rather compact and I dare say rather comfortable.

White appears to be the new black, as the current edition keep things cool in an Arctic style exterior (black is also available). I’ll be honest, I do seem to be drawn to white peripherals these days. The good news though is that the G600 is not a traditional glossy plastic, but instead has a matte finish. 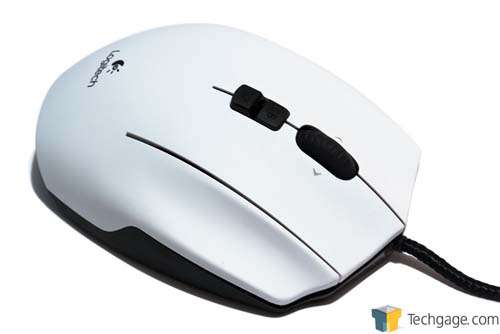 The underside is very minimal, with only two very large PTFE feet and a single sensor in the middle, there really isn’t much going on, just as it should be. Despite the cable being braided, it’s very smooth and doesn’t catch.

The main feature of course is all the buttons on the side, under the thumb. MMO-style, or more accurately, “excessive button” mice, have slowly been trickling out of various peripheral manufacturers. Starting with the Razer Naga, Mad Catz’ R.A.T.7 MMO, and the recently reviewed Corsair M90. 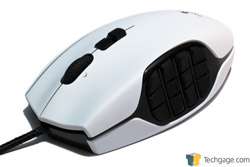 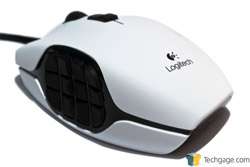 All these mice aim to tame the number of accessible abilities made available through various online and strategy games. When you are bewildered with an array of over 40 abilities and only about six accessible above WASD, it means that the coordination and rapid mouse movement required, increases. MMOs without in-game macro support can become very complex games to play.

But it’s not just games that can take advantage of all these wonderful buttons. As someone who uses a lot of Photoshop and Illustrator, my left hand is almost permanently hovering over CTRL, ALT, SHIFT and SPACE. Assigning hot-keys to the mouse means less travel for my left hand.

Button feedback is extremely precise and sharp. Lightweight buttons and a soft click are just the way I like it as I don’t have to fight to get it to perform. However the mouse is no lightweight; there are no adjustable weights either. 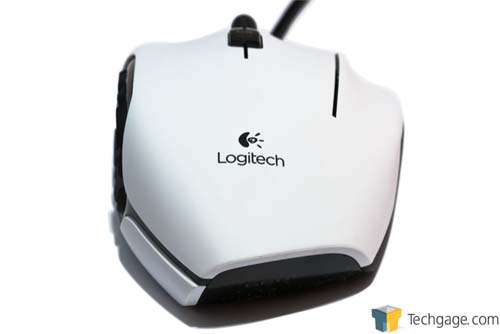 One of the first things I tried to figure out when I picked up the G600 was “where are the back and forward browsing buttons?” Turns out Logitech made some modifications to its standard button layout; what I would normally associate with horizontal scrolling on the scroll wheel, are now the back and forward buttons. Past mice I’ve used with horizontal scrolling have all been difficult to handle, as the awkward angle and stiff nature of the button leads to frustration. Fortunately this time round, it’s quite easy to use and flicking back through Web pages is simple. 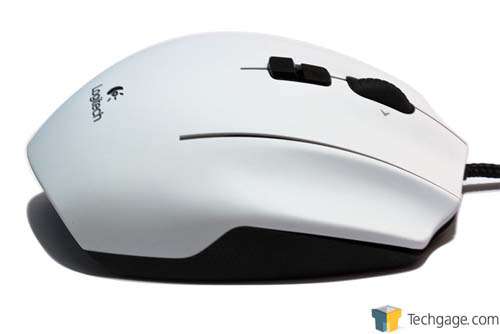 The thumb buttons on the side correlate with the top 12 keys on a keyboard, ranging from ‘1’ to ‘=’. The party trick the G600 has, is a dedicated ‘G-Shift’ button on the far right (I initially didn’t realize this was a button). When held down this temporarily changes the 12 G-Keys to a different set, by default ‘CTRL+1’ to ‘CTRL+=’, giving the user 24 buttons to play with. This shift keyset is actually extremely useful as many games often have an extended ability row with either an ALT, CTRL or SHIFT modifier. With certain games like Star Wars: The Old Republic, it’s now technically possible to play the entire game one-handed.

There was one minor catch. When the G-Shift key is held down, it interrupts all other mouse buttons. This can be quite the lesson in frustration when clicked by accident (like when holding RMB for camera control). There can also be the occasional jitter in tracking when the G-Shift is pressed. In the default third profile mode (which is like an FPS mode), the G-Shift acts like a DPI adjust or ‘sniper’ button. Using G-Shift while in this particular profile does not cause any issue with the right mouse button, so the issue is related to the way the profile handles the shift. 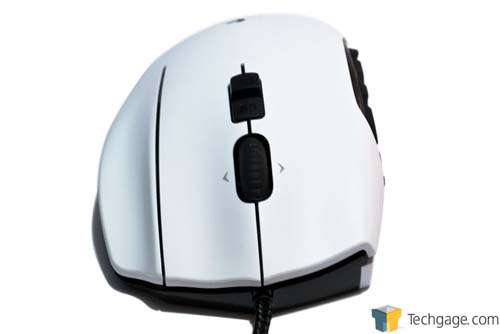 There are two buttons on the top of the mouse behind the scroll. One is a profile selector for switching between the three on-board profiles; the other serves two functions by default, based on the current profile selected, SHIFT-B (normally inventory) or DPI selector. 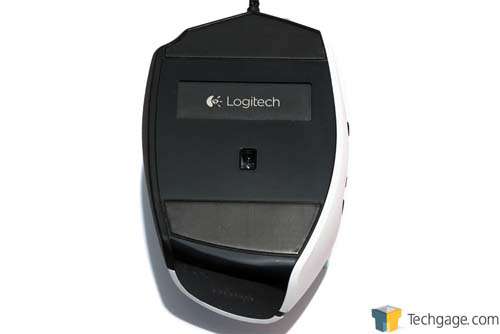 The sensor used, I’m not entirely sure as to its model number, but it can track at a ridiculous 8200 DPI. Testing different surfaces, I was able to get it to work on various glossy plastics and to a limited extent, and glass (still a bit twitchy, so not recommended). Due to the extra weight of the mouse, fine movement can be a little tricky while trying to overcome the static friction of the PTFE feet.