by Jamie Fletcher on January 19, 2011 in Peripherals

Are you an avid gamer looking for a feature-rich and reliable gaming mouse that also happens to be wireless? Logitech’s G700 might be worth a look. At around $85, it’s not cheap, but it does offer a plethora of customizable buttons, the ability to go wired if the battery dies, and also supports a super-high 5700 DPI.

Starting off the year, we have another mouse under review for you. This time we’re looking at a higher-end option; Logitech’s G700 wireless gaming mouse.

The G700 has been in my clutches for a fair amount of time, and put through some heavy testing. While many of its features are familiar, this mouse is built for gaming… wireless gaming, at that. Can it meet the very demanding expectations of the hardcore gamer?

The debate over whether or not wireless should be in a gaming peripheral (and a mouse at that) will probably continue on for eternity. Many ‘Pro Gamers’ would never use a wireless device for gaming since even the chance of loosing connection mid-game is unacceptable – but the good news is that the G700 can be used wired as well.

Before we get into the nitty gritty, let’s have a gander over the design, button placement and aesthetics. 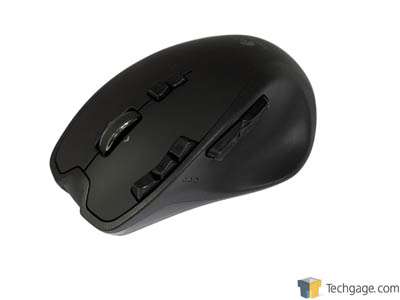 Button placement favors the thumb and index finger. The thumb recess gives access to the usual 4th and 5th buttons (labelled conveniently G4 and G5) allowing for back and forward browsing and includes an additional 2 extra buttons above (G6 and G7, which have no obvious default function), giving a group of 4 buttons with easy thumb access.

Each button protrudes a fair amount with large indentations between for an intuitive feel to placement, so no glancing over to check which button you’re pressing. There is a decent amount of feedback, requiring only a light press to activate. Just in front of the thumb rest houses the three LED indicators. The color defines the option; green for battery, orange for profile mode and red for DPI level. 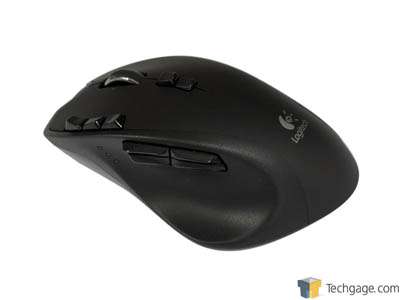 The top of the mouse is rather busy and not exactly the most streamlined button set I’ve come across, but it is extremely practical. There are the two major buttons and 4-way HyperScroll at the front. The middle; behind the scroll, has the scroll lock to switch between the free floating and locked scroll mode.

Just behind the scroll lock is the G11 button, which defaults as the mouse profile switcher (orange LED indicators). Pressing it once shows you the current profile with a visual indicator on the LEDs, it cycles through with each press, activating the relevant profile. Up to 5 profiles can be stored on the mouse’s onboard memory (with certain limitations). 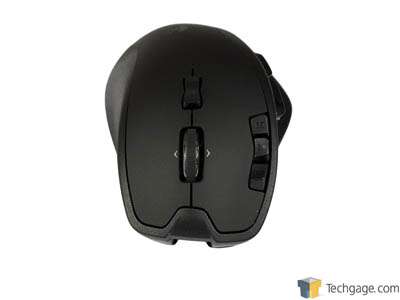 On the far left side within easy reach of your index finger is a group of 3 buttons, G8, G9 and G10. It’s worth pointing out that each button is labelled as such… it’s just not obvious in the photo. G8 defaults as the battery level indicator, activating the LED lights in green. G9 and G10 default to DPI level down and up, respectively, again, utilizing the LED but in red as a visual indicator.

One to five DPI modes can be assigned to the current profile, so you can set 2 DPI modes for games with a single button DPI loop (as set by the ‘Gaming’ profile), or you can use all 5 DPI modes and cycle through them in the default ‘General’ setup. These three extra buttons are square with easy access and distinct shapes, allowing for blind navigation.

The button layouts and shapes are very distinct and provide a very functional layout, though aesthetically, very poor. It really does look like an M705 or MX Revolution with a bunch of extra buttons slapped on.

That may seem harsh, but it is important to state that this is a very functional design choice, and not one of form. These buttons are very easy to find without looking, important for high concentration work/gaming. The only real complaint would be the placement of the G11 button, since it requires bringing the index finger all the way back and is quite uncomfortable to perform. 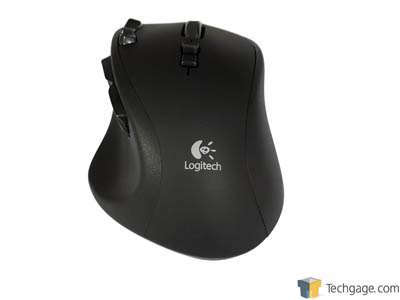 Either side of the mouse is a very heavily textured surface and feels very rough, providing ample grip when things get sweaty. The M705 Marathon mouse recently reviewed was made of a similar plastic around the body (minus the textured grip), but it did not induce sweating.

The G700 does and it gets very distracting after a while, so this must of been foreseen and hence the extra textured grip around the edge. It is worth mentioning though that I am a rare case, most people that own this mouse do not have this complaint, only a small group have made mention. If you do suffer from sweaty hands, take note.