Logitech SetPoint hasn’t changed much in the past few years, and the latest release is not much different. The first screen you’ll see has a picture of the mouse, and allows you to switch to a different mouse if you have more than one installed. You can configure each button to your liking. I am simple… and tend to like the way it’s set up from the get go, so I didn’t change anything. 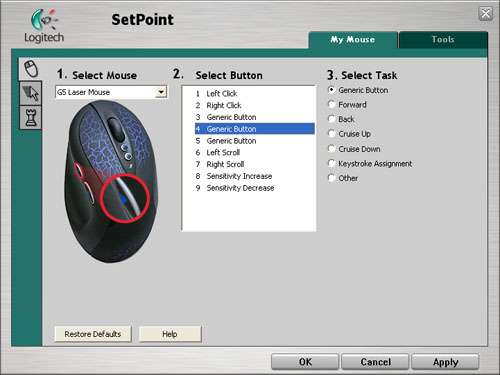 The gaming section is a lot more robust this time around. As is becoming the norm, you can change your report rate from between 125Hz – 1000Hz, with 500Hz being the default. Also interesting to note is that you can now change the DPI on each axis, instead of both at once. This would prove useful in a variety of genres. First one that comes to mind is a flight sim, where you might want to turn slowly but ascend/descend with loose controls. 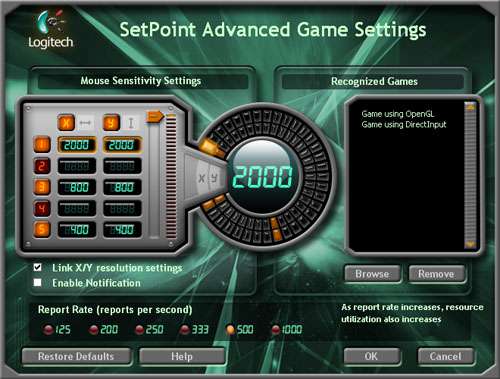 I’m happy to see Logitech has upgraded their software to cater more to hardcore gamers. Most will not want to configure their axis sensitivity individually, but it’s nice to know the option is there.

As for the upgrades that Logitech doesn’t really boast about, it’s nice to have an additional side button, as it really should have been there from the beginning. Now we just need a second thumb button on the G7 and we’ll be good to roll. The upgraded sensor is something difficult to touch on, but I didn’t really notice anything amazing. I believe the primary upgrade refers to the software which allows you to handle polling. The actual sensor itself may be upgraded as well, but I didn’t find a problem with the original, so I was not sure what to look for here.

If you own the original G5, this probably is not worth the upgrade price considering it’s near identical, just with a few new updates. If a second thumb button is that important to you, then it will be worth picking up simply because it’s a mouse you are already used to. 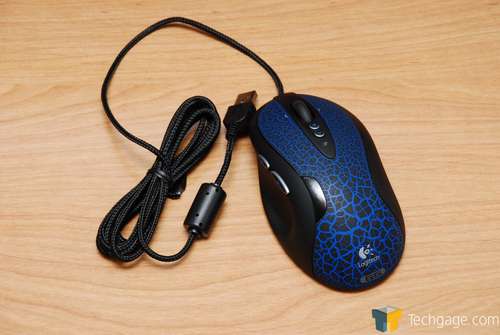 To elaborate on what I touched on in the intro, this mouse might be a little difficult to find in stock, anywhere. I perused a few e-tailer and price comparison websites and couldn’t find them available anywhere. There is undeniable demand for this mouse though, so some e-tailers would be wise to get them in stock, alongside the original.

All of that said, I am awarding the revised G5 mouse an 8 out of 10. We gave the original a 9 out of 10, so you might wonder why I am docking a point here. The reason is that this is simply a rehash of an already successful mouse. It doesn’t bring anything new to the table, which is why Logitech is keeping so quiet about it.

Since the G5 was released, we’ve seen numerous variations, but nothing that warrants added excitement. The G5 upgrade should not be taken lightly, as it’s a great mouse. I’d just like to see Logitech bring something new to the table, rather than revamped versions of the same mice we’ve seen many times before.