by Rob Williams on September 7, 2020 in Graphics & Displays, Processors

MAGIX’s Vegas Pro 18 has recently launched, so we’ve decided to not just pay it a visit, but throw a dozen or so CPUs and GPUs at it, and see where strengths from each vendor pop up. In addition to the encode and playback tests we’ve run before, we’re adding three new tests to this round, each revolving around one of the new FX filters: Colorize, Style Transfer, and Black Bar Fill.

As mentioned on the previous page, our CPU encode testing has been augmented with two new tests, both of which take advantage of MAGIX’s new artificial intelligence features. In order to even use these FX options, you’ll need to install a separate package for the deep-learning models, which require a mere 200MB of storage space.

On occasion during testing, we encountered an error where Vegas’ viewport would tell us to download required data for the AI function to work, even though it was already installed. This caused us to have to retest a few extra times, but all that’s required to fix it is a restart of the software (and thankfully, Vegas Pro launches quickly compared to most other solutions.)

Let’s first start with a returning test, for Median FX: 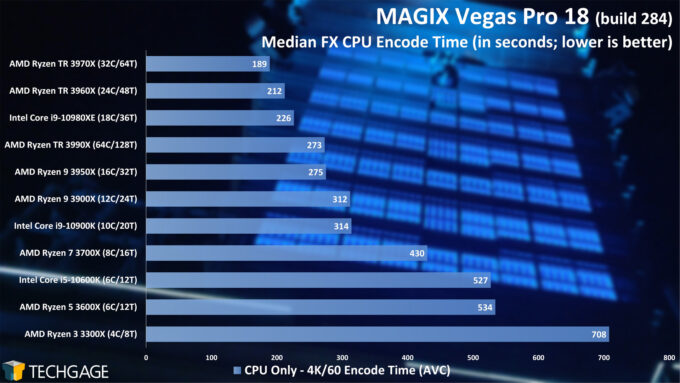 The performance scaling seen here is pretty much what we’d expect, especially based on the fact that this isn’t our first time testing Vegas in-depth. AMD’s top-end 64-core processor continues to struggle, as only half of the entire CPU is used by Vegas, while also clocked slower than its siblings. That leads to an odd scenario where it will perform worse than the 32-core Threadripper – and speaking of, that chip happens to reign supreme at the top.

Considering the core count gains of the Threadrippers and (in some cases,) Ryzens, Intel’s chips perform quite well in this test. The 18-core 10980XE sits only just behind the 24-core Threadripper 3970X.

Let’s check out the new tests: 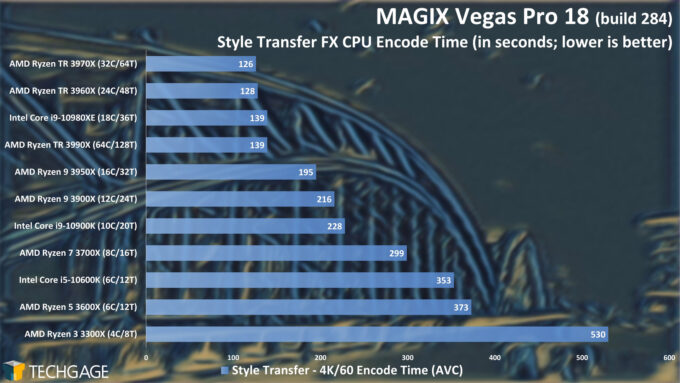 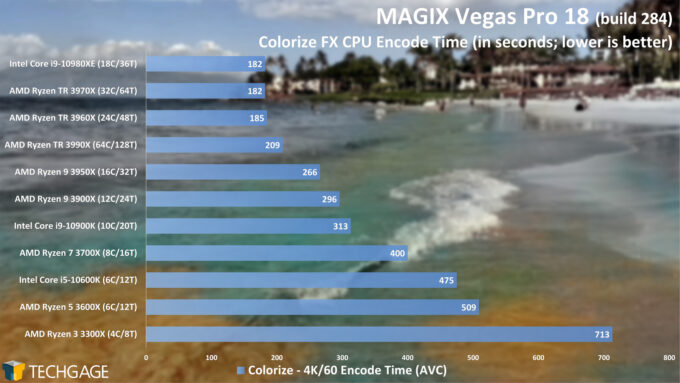 The sorting of these results isn’t too different from the Median test, although there are a couple of shake-ups. With the Style Transfer test, the 3960X and 3970X performing pretty well the same, and the 18-core i9-10980XE sits just behind them. Meanwhile, the Colorize test shows a greater strength to Intel’s top-end 10980XE, aligning it with the 3970X Threadripper.

We’ll be quick to say that the GPU is going to likely be more important to you in Vegas Pro than the CPU, but the choice of either should still be heavily weighed. We didn’t include CPU + GPU results this go-around, because all of the CPUs we tested were giving us the same result, hinting that the GPU is far more important in those tests than the others – even though we saw great scaling before. We’ll revisit this heterogeneous encoding next time we do a full retest.

To test Vegas Pro playback performance, we run our 4K footage inside of a viewport configured to Best (Full) quality. After opening our project, we let the first fifteen seconds of our 4-clip timeline play before capturing the active frame rate for the next minute. As you might expect, the start of the timeline will lag a bit on most (or all) platforms because of all of the data being fetched, but ideally, it should smooth out relatively quickly.

For our testing here, we’re using our verbatim LUT project from earlier for our playback test here, as well as a custom Median test that repeats some footage to ease on loading (not that it matters, as you will see.) 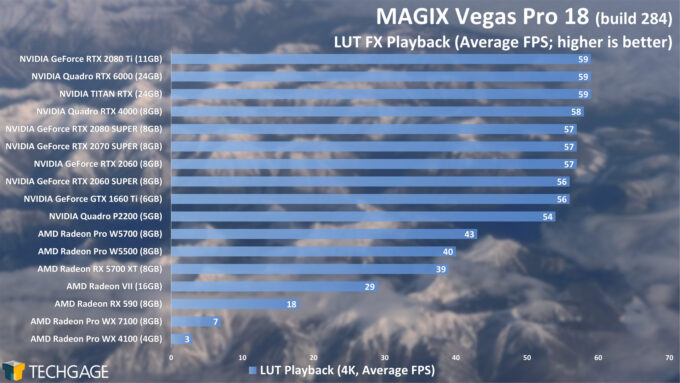 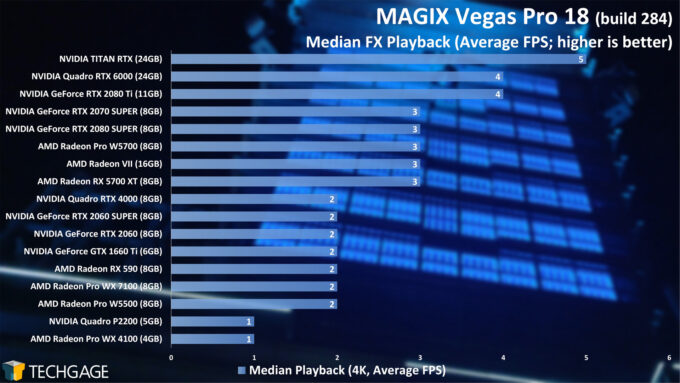 It’s interesting that Radeons have strengths in so many areas in Vegas Pro 18, yet for this latest round of testing, NVIDIA dominates the LUT test. The difference is like night and day, with NVIDIA at top, and every single Radeon on bottom. While watching, it was easily witnessed: the AMD playback would be stuttery for far longer than it was on NVIDIA, and as this wasn’t the case last time, we suspect future VP18 builds could boost Radeon performance again.

Either on CPU or GPU, the Median FX does a good job of telling high-end hardware that it’s rubbish. This is more of a brute-force test to see if we can glean any scaling, and while there are minimal deltas here, this is about the result we’d expect – except for Radeon in some cases. AMD did better in the Median encode test than this Median playback test. A different preview mode is needed to get better scaling here.

On the performance front, let’s start with CPUs. Even though you’ll likely rely on the GPU quite a bit, there are many FX filters in Vegas Pro that stick to the CPU. That includes the brand-new AI features. In this area, AMD had some real strengths, mostly if we’re looking at the cost angle. Intel performed great in some cases, but then fell short because AMD is selling a CPU at the same general price, but with extra cores. We saw the ~$499 12-core Ryzen 3900X beat out the ~$499 Core i9-10900K in every CPU encode test. 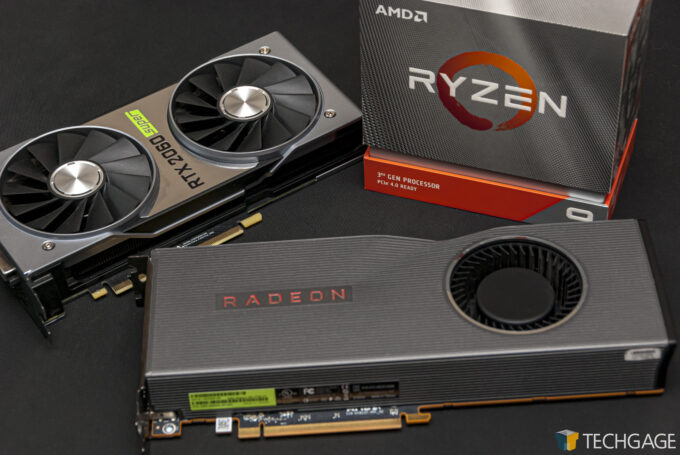 At the top-end, Intel’s $999 Core i9-10980XE performed really well, and considering the next step up Threadripper costs hundreds more than that Intel, it makes that 18-core look pretty attractive for top-end workstations. The best bang-for-the-buck CPU we tested would have to be the 8-core Ryzen 7 3700X, priced at ~$290.

With our graphics card testing, we saw many examples of where AMD has some obvious strength, especially with its Radeon RX 5700 XT. With even the aged RX 590 outpacing the RTX 2080 SUPER in the Median encode test, it goes without saying that we should be seeing even more impressive performance out of the green team. It’s odd, then, that the new Black Bar Fill mode didn’t even work with Radeon.

Because of the varying results with AMD and NVIDIA, it’s harder to choose a best bang-for-the-buck here, although we feel like you couldn’t go wrong with either the $399 GeForce RTX 2060 SUPER or $399 Radeon RX 5700 XT. Both offer 8GB of memory, and perform well for their price-point across encode and playback tests.

As always, we’ll continue to test with Vegas Pro as time goes on, and as more builds (and GPU drivers) come out. While there were some anomalies found in testing, this was the very first release of Vegas Pro 18, so we’re not entirely surprised that they exist. Further, both AMD and NVIDIA have new GPUs set to launch in the months ahead, so as soon as we can get our hands on them, we’ll also get them tested. Stay tuned, and as always, your feedback is appreciated.