We first took at look at the Maxtor Shared Storage II back at CES, when they showed off their soon-to-be released firmware upgrade for customers.

The Central Axis software, which looked so promising it won one of our best of show awards, will make personal data stored on the NAS available over the Internet from a login on Maxtor’s website, letting you access your data anywhere. Though the Shared Storage isn’t a new product, we decided to write a review of it anyway, and do a follow-up article about our experiences with the firmware upgrade when it is released to the public.

NAS products have become a more realistic solution for data storage and backups in the recent years. Today, not only are they easy to set up and use, probably most important, they are more affordable then they have ever been.

There’s no easy way to share all of your media in a central location, and with the advent of easier to use and more sophisticated backup software, making sure your data is safe is as simple as leaving your computer on. Physical media like discs and remote solutions have their purposes, but they’re hardly the right candidate to trust huge amounts of data with, whether the limiting factor is cost, time, or both.

The market has been saturated with choice, yet even though older products can be phased out and replaced, the magic of software allows them to keep that cozy spot on your desk (or in the dark corner of your office space, considering some of these things can be pretty loud). While newer products may be faster or more attractive, there’s little reason to retire your NAS if it simply works and has the features you need. 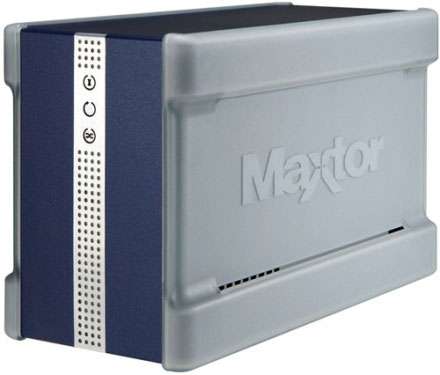 Here at Techgage, we’ve reviewed plenty of NAS enclosures, but fairly few read-to-go NAS devices with drives pre-installed. This previously non-existent market has flourished as prospects of high-capacity, flexible storage solutions that more and more users are beginning to understand and take advantage of. The chances are well that you’re reading this review to get a footing of what types of products are available on the market.

The SSII is definitely an older generation product, as you can probably tell by taking one look at it. It’s a dual-drive enclosure with two 500GB drives inside, combining the total storage capacity to 1TB. It lacks a lot of advanced features such as FTP or HTTP access, custom protocols (limited to Samba), and more exotic features like using it as a web server, but to be fair, those features are either rarely available in anything other than higher quality drive-less NAS bays in a roll-your-own kind of fashion.

Perhaps the most annoying limitation of this drive is the inability to make use of the RAID 1 option, that is, the case can not be opened without damaging the product. This simply perplexes me, and is the most dangerous thing about the product. Since you’re options are combining or mirroring the drives, combining them will result in double the chance of failure, since all of the data is gone if one of the drives stop working. Even though data can be mirrored, since the case can’t be opened, there’s little use in trying to recover your data yourself.

We contacted Maxtor regarding this issue and were told that if a single hard drive did die, then a thumb drive could be connected to the unit in order to “back up” the data to it. However, this will not work if the failed hard drive affects the normal operation of the NAS itself. Also, if the NAS is sent in to Seagate to be repaired (if still under the 1yr warranty), there is no guarantee you will receive the exact same “good” drive back with the unit.

Their suggestion to prevent this is a little odd, which is to keep regular backups. Since most people use a NAS for that very purpose, backing up again seems a little redundant, no pun intended. However, it is wise to do, especially for important data. Maxtor went on to mention that small businesses, who the SSII are primarily designed for, would keep secondary backups always, so a unit gone bad would not be major issue.

The pricing seems to be in line with other comparable products out there (considering NAS prices generally fluctuate depending on what features they offer), but it wouldn’t hurt to price it more aggressively. In a market that has so many different products, it’s hard to grab attention when it blends in so easily. I don’t think it’s out of most people’s budget, but if you’re technologically inclined, there’s little stopping you from either purchasing an empty bay and a few hard drives for the features, or a newer router with a USB port and support for storage if you want to save money.