The Shared Storage II simply holds two 500GB hard drives in a plastic chassis. It may be bigger than a typical external hard drive or one-bay NAS, but it’s not by any means huge. The blue and grey design is somewhat simple, in my opinion, if not attractive, but that’s open to interpretation. As we mentioned earlier, since the drives inside the NAS are not user-accessible, there are no screws or latches anywhere on the device that can be seen simply by looking at it.

Three green LEDs occupy the front, the power and standby status, hard drive activity indicator, and network activity indicator. There are holes drilled into the front of the case that don’t recede into the internals, which are only present for cosmetic purposes, and allow no air to be moved.

On the back, there is a power button, AC jack, two USB cables used to connect another storage device or printer to share on the network, an Ethernet jack, and a Kensington lock slot near the bottom. A small fan is located on the opposite side of the row of ports. It’s audible as ambient noise, but hardly something to complain about when other components are typically louder. 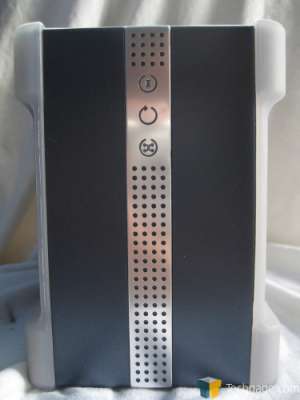 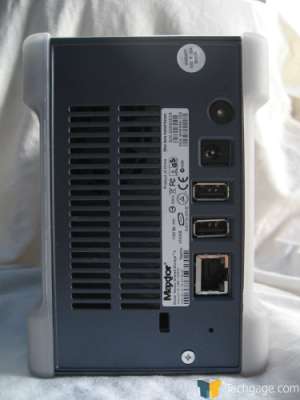 The edges are raised to allow the box to rest primarily on its longer sides. The rubber shields with the Maxtor logo that cover the sides seem to hold no function other than complying with the rest of the design. Most of Shared Storage seems to be form over function, which I’m partially fine with, considering we’re dealing with a consumer-oriented product, and no issues are brought with it. 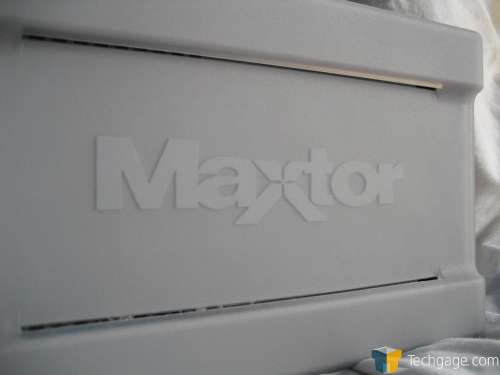 Maxtor’s product is very heavy and sturdy. It doesn’t have a cheap feeling anywhere on the body even if the majority of it is composed of plastic, and it gives you a satisfaction that you purchased a quality product, instead of something poorly put together. As you can probably suspect, I don’t have any ailments with the build, but it’s strictly a “no-frills” device, so if you’re purchasing it, you know what and what not to expect.

We would normally open and take apart the NAS to inspect the internals, but Maxtor has sealed it off. The situation is worth an immediate mention, because the concern is daunting. Even if the Shared Storage II is geared toward home use, I see no reason why Maxtor couldn’t allow customers to have access to the drive at the cost of voiding their warranty, especially since it has the ability to use RAID 1.

The SSII also only holds a one year warranty (compared to most Seagate drives and recent Maxtor products which have a five year warranty). If a drive fails, even though data may be lost, customers are forced to go through a process of jumping through hoops with Maxtor (regardless of how easy or hard that may be) to get their data back.

Because of this, I’m reluctant to trust important data on the drive. It seems fine for backing up or using it as a way to extend data you already have stored locally across your network, but as what should always be the case, sensitive files should be kept in multiple, remote locations. The chore of having to backup your critical data far outweighs the frustration of leaving it inaccessible for the RMA period if the drive dies.

Maxtor does sell a single 500GB drive version of the drive, which may even be a better choice if you’re only planning on using RAID 1 to mirror data. Compared to the 1TB version which can be had for around $380 online at the time of writing, the 500GB model is sold about $180 less. Combined with the smaller footprint, it may be a more sensible solution for some, but your personal needs would have to be evaluated.

The absence of certain features does bother me, and it’s an issue that’s hardly unique to the Shared Storage II. In my opinion, there should not be artificial limitations on products if they are capable of having a certain feature. While Maxtor has shown that they are willing to allow customers an upgrade path with their free Central Axis upgrade, assuming the upgrade only offers that one feature, there is still more that can be done.

As pointed out by other sources, the NAS apparently runs a version of Linux and Apache (using an ext3 filesystem). There’s little reason, besides the initial cost of development, to resist adding features that will make your product more attractive to other potential users.