by Matt Serrano on December 25, 2007 in Peripherals

The long anticipated Wireless Entertainment Desktop 8000 is here, but does it impress? The entire package does a fine job of looking good while offering solid functionality, but we found it lacks greatly in a few key areas. The most notable being the price… at $300.

Microsoft’s Desktop 8000 shares many of the same similarities compared to its older sibling, the 7000. Putting the two together, you would most likely only be able to spot a handful of differences. The overall look remains the same, but the keyboard has a more pronounced metal look, and the 8000 contains a few smaller features that the 7000 simply lacks.

You could say this keyboard is special, in the sense that it’s designed to be used on both a desk and a couch. The entire package seems to have an appeal destined for many different types of users which is indicative of its showing.

The keyboard is simple (in a way) and elegant enough to be used in an office, with the accompanying shortcuts and tools to make more use of it, but its potential shines in a home theater setting, where the typist can make use of most of its features (and I’ve never heard of a business user who couldn’t get by with a $20 Dell keyboard and mouse).

Like Rob’s complaints in his 7000 review, I am not a fan of the semi-ergonomic keyboard. The curved-shape of the board doesn’t sit well, but I would imagine anyone looking at this set would be familiar with or at least comfortable getting used to the change.

The package contains both a mouse and keyboard. Since both peripherals are wireless, a charging base station is also included that will charge both. Five double-A batteries are included to run the set, four for the keyboard and one for the mouse. 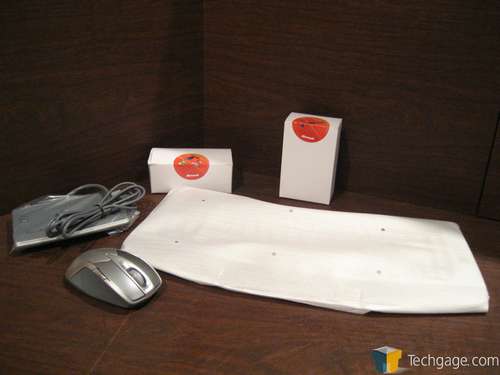 Upon first impressions, I was severely disappointed when I took the keyboard and realized it was mostly made of plastic. Judging from Microsoft’s description, I was under the impression that most of it would have been made out of brushed aluminum, not the top part that only makes contact with the charging bay.

The keyboard is silver all-around. Darker accents are on the top and bottom, which provides a nice display of contrast and generally enhances its presentation. The keys are cut through, similar to how the Logitech G15 or Saitek Eclipse keyboards look, but any additional information (numbers, mathematical operations) are screened on. 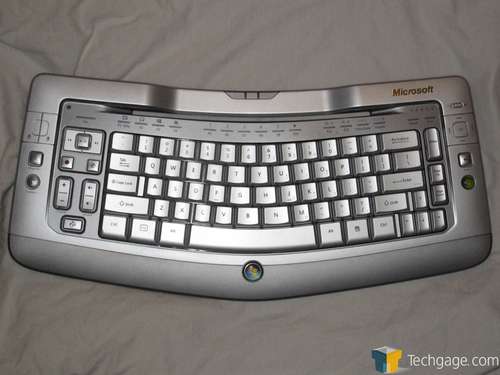 The keys are laptop-style, but unlike most keyboards that incorporate them, they don’t use a traditional desktop layout. For instance, the “Delete” key and ” “Page Up/Down” keys are squished in the right-hand side. The arrow keys are also bunched together, which makes them hard to hit when you’re into your first few hours using it.

The Escape, Function Print Screen, Pause/Break and Home and End keys on the top row are touch based. I thought that was an interesting choice considering there doesn’t seem to be any reason to choose them over physical keys. I found them to be annoying to use because I couldn’t tell when I was pressing one, or in some cases I would press one on accident, interrupting my work flow. 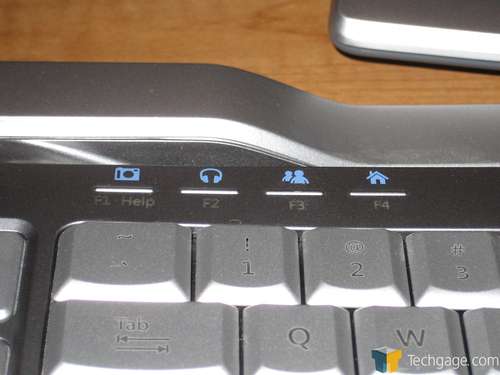 The keys are backlit with white light, but one of the cooler features is the “Intelligent Backlighting” feature, which is designed to turn on when you’re at your computer and when light is low, but turn off when you walk away or it is not needed to save battery life. During my testing, the backlight did occasionally turn on and off when it wasn’t supposed to, but it didn’t bother me at all. To me, it’s subtle and doesn’t blind you. If I didn’t have my hands over it for a period of time, it would turn back on when I started typing. 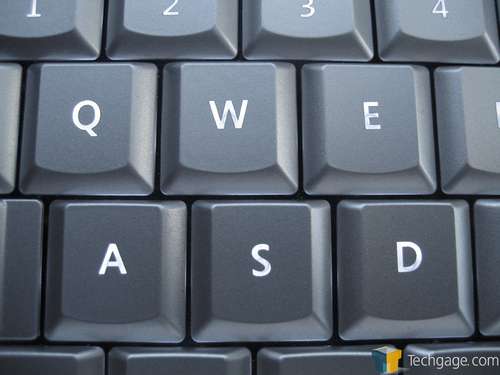 The extra keys are located on the left and right sides. The right is the more barren of the two, which only has a navigation pad (similar to a track pad on a laptop, which would be most useful when using it on a couch), a back button and an orb with a Windows Media Center icon to start the interface. 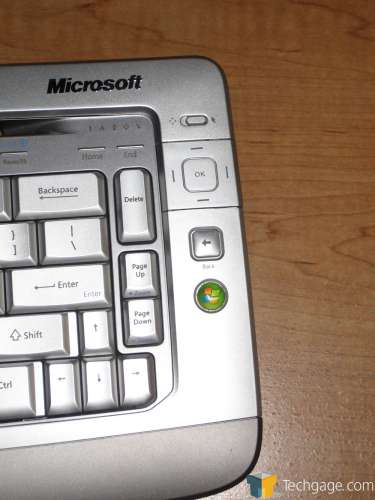 The left side has your standard affair of media keys, a record and mute button, channel and volume controls, and a button used to call up OneCare (by default). The outer edge has a left and right mouse button, a magnifying button and one last button used to bring up Windows Gadgets. 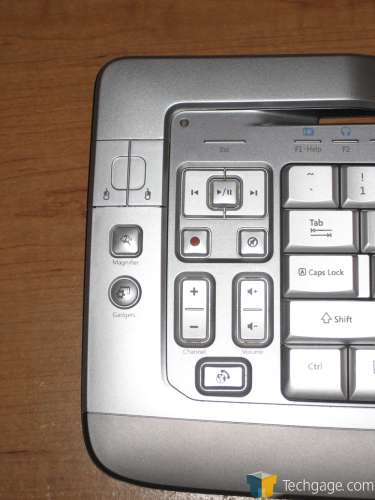 I don’t like the placement of the Windows button. In its place, an Fn button was placed (there is no Windows key on the right-hand side) which is used to type certain keys or initiate certain features, underscored in blue type. It’s not hard to get to by any means (your left thumb can travel over fine), but I have to say I’m personally used to having it next to the Alt and Ctrl keys.

Compared to the keyboard in the 8000 set, the right hand is much simpler. The included mouse is an attractive peripheral that lends itself well to the overall experience, but I wouldn’t say it’s nearly as interesting or innovative. 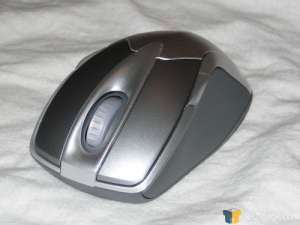 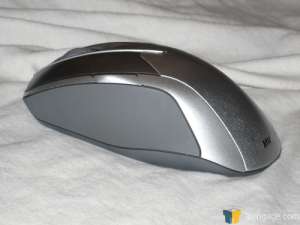 The mouse seems odd to hold in general, but for some reason, it seems to work better in my left hand rather than my right. I’ve never been a fan of ambidextrous mice, and the 8000 is no exception to my rule.

The area where the palm rests is aluminum, but you probably couldn’t tell that by its feel, which still feels like hard plastic for some reason. There is a nice feel to the left and right grips, and most of the buttons are easier to reach, with the exception of the magnifying (right) button. I could get to the back (left) button easily by lifting my thumb, but getting to the other one felt awkward and usually involved me moving my ring or middle finger over. I would have personally favored having both of them on the same side, but there is an argument to be made for left handed users.

The scroll wheel glides easily, but it has a peculiar feel to it. By moving it slightly or for short periods of time the wheel remains stiff. Moving it even more would cause it to spin rapidly. This is by design, but opinions will be mixed. The wheel is also able to scroll left and right, but I found it to panic most of the time and go in the other direction for some reason.

The charging station is probably my favorite part of the bundle. I love the amount of choice it gives me and it’s simply convenient to use. It basically charges both the mouse and keyboard. It rests on the metal contacts on the top bar of the keyboard, and the mouse is placed on top (in either direction). 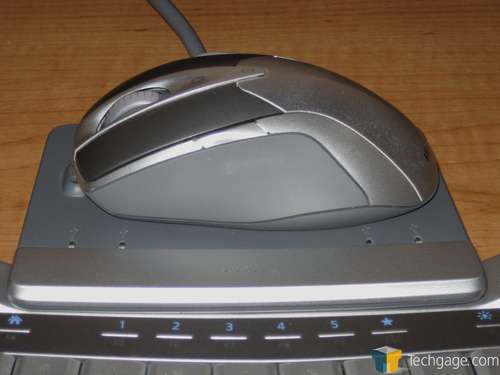 The fun part is the USB hub it doubles as. There are four ports in total, located on the three available sides of the device. One of them is designed to fit the Bluetooth adaptor, but it can be used with any cable if you prefer connecting it straight to your computer (or if your computer is already Bluetooth enabled).

If you find the station clunky (and you could say it is, it’s rather heavy), you can still replace the batteries like any other set. It’s the best solution I’ve seen from any wireless keyboard and mouse, but it’s not without its problems. The USB cable is not detachable, so despite being able to plug the Bluetooth adaptor into your computer, the cable will be dangling in the breeze somewhere nearby. Another problem I had was with charging. A faint whining noise was emitted while the keyboard or mouse was being recharged which will bother a lot of people.