A couple of months ago we took a look at two pieces of Mionix gear, the Avior 7000 and the Naos 7000. We came away being very impressed with the Mionix wonder twins.

This time around, we have something else from Mionix. Instead of a gaming mouse, however, the company has sent Techgage its NASH 20 gaming headset.

As the “20” in its name might suggest, the NASH 20 is a stereo gaming headset. This is certainly no bad thing; I won’t shy away from any accusations that I have a strong bias for stereo headsets. But what about the “NASH” bit? I have to be honest and confess that I was intrigued by this part of this headset’s name. Perhaps the product webpage might shed some light on the question.

Thankfully, it does. According to Mionix, “NASH” is the third-largest star in the zodiac constellation Sagittarius. The company goes on to say that “Nash” is also “Arrowhead” from Arabic mythology. This choice of name, I suppose, is Mionix declaring that this headset is meant to hit astronomic performance expectations with an arrowhead’s sharpness and precision.

Name games are fun and all, but what’s a name if it doesn’t justify its claim to fame? At the end of the day, the NASH 20 will earn a name for itself through its performance. We’ll see how that all works out later on in the review.

For now, though, it’s time to have a good look at it. 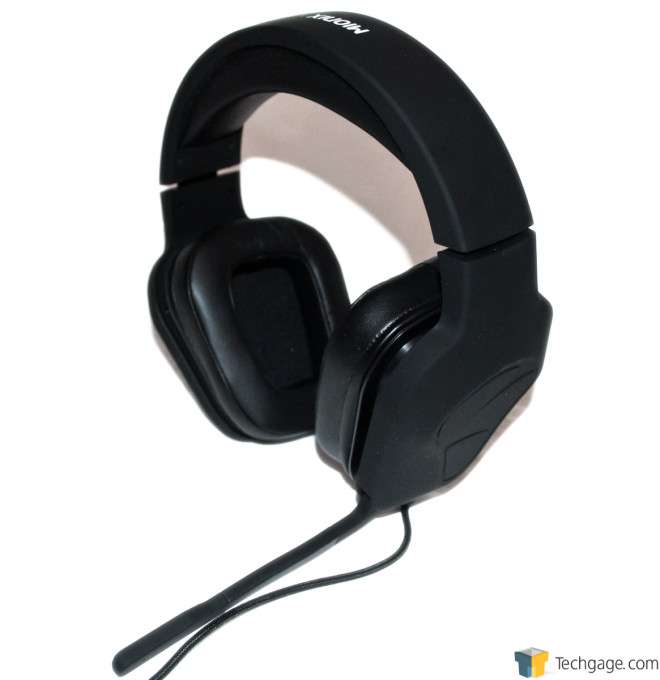 Here is the NASH 20 in all its matte black glory. The coloration and the styling really seem a bit counter-intuitive to what one might expect of gamer gear. By this I mean that some companies give their products eye-catching color schemes and styling. Mionix, on the other hand, prefers to go against the grain, favoring understated colors and shapes. Again, I will admit to my own biases and say that I like the more austere, minimalistic aesthetic Mionix endows its products; indeed, we saw much the same with the Avior/Naos. 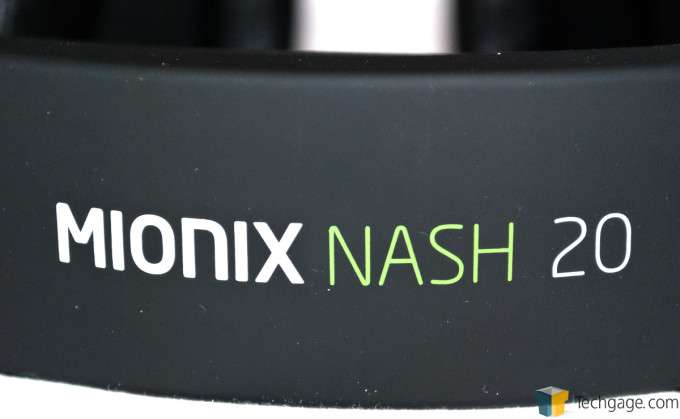 That’s not to say that the NASH 20 is totally bereft of color. On the outer surface of the headband, there is some branding in white and Mionix avocado green. The colors are a good-looking contrast to the matte black that dominates the headset, although the placement of the branding is still consistent with Mionix’s penchant for minimalism. I mean, it’s not like people are going to see that branding easily. I like that it’s “hidden” in plain sight. 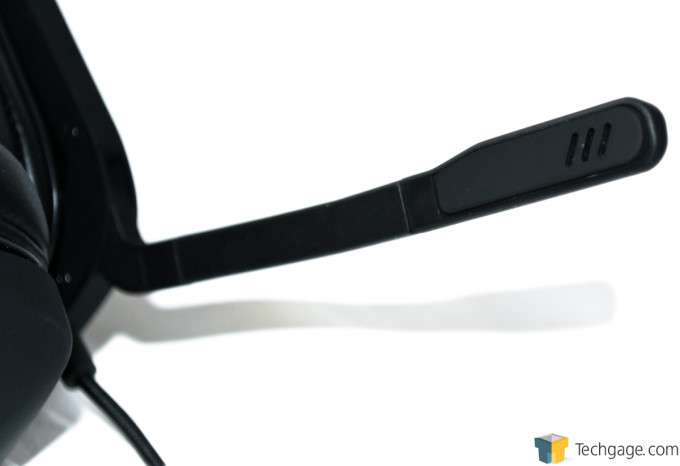 Here is a close-up of the microphone boom. The boom is flexible, but doesn’t really retain bends as well as you might expect. It is not removable; however, it does swing up and down. When it’s in the up position, the mic is automatically muted. It’s a very elegant solution. 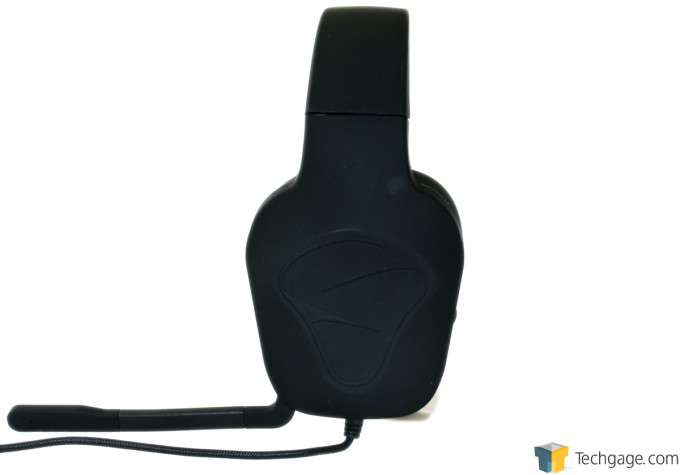 There is really nothing too radical about the NASH 20’s shape. It’s basically just a pair of radiused hexagons joined by the headband up top. I suppose the angular, L-shaped boom is a bit daring, but it integrates well with the rest of the headset’s looks. Perhaps the most noteworthy part of its visual presentation is the Mionix logo carved into each ear cup’s outer surface. Because of the NASH 20’s color uniformity, though, such decorations, even as big as they are, really aren’t as eye-catching as they might be, had they been presented in a contrasting color. It’s very much unlike a certain competitor’s aluminum armor plating on the ear cups. Call it boring, if you must; heck, call me boring for preferring Mionix’s understated sensibilities. I just think it’s refreshing for gaming gear to not be the PC peripheral equivalent of an attention-hungry strumpet. 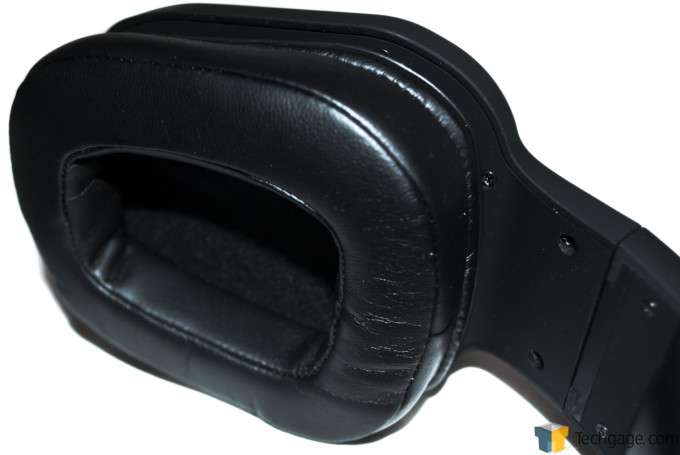 Speaking of the ear cups, here’s an up-close look. Both are fully-adjustable and have memory foam cushions, ensuring a very comfortable fit. The same memory foam resides in the headband’s inner surface. 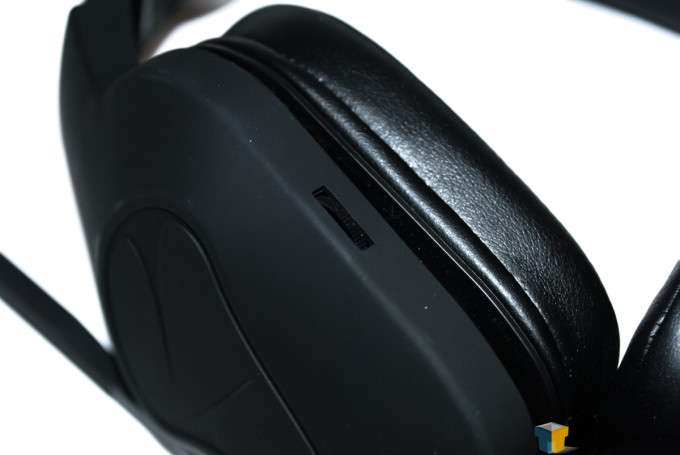 Here’s one last detail shot of the NASH 20’s ear cup. We’re looking at the small volume adjustment wheel at the back of the left ear cup. It controls the volume output level of the speakers. The speakers, incidentally, are 50mm DACT drivers which are angled for optimum playback. 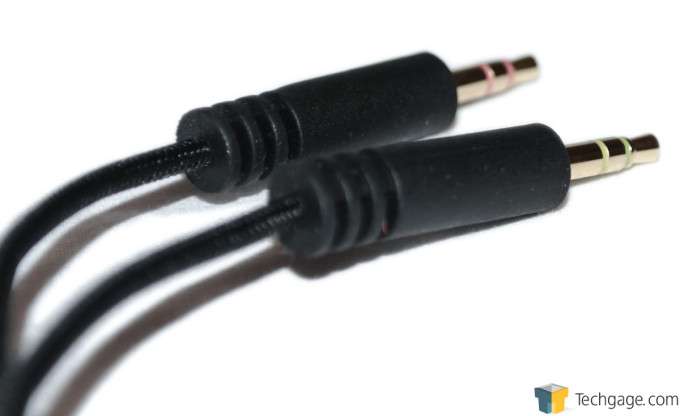 Our final photo is a close-up of the audio connectors. Both connectors are the 3.5mm type and are the terminal ends of a 2m long braided cable. The connector with the pink rings is for the mic-in, while the one with the lime green is for the audio out. It’s all very normal and conventional, sure, but the execution is top-notch.

Now that we’ve had our little photographic tour of the NASH 20, let’s see how it performs, after which we’ll have some final thoughts.