Following a template established by two of its greatest rivals, MSI has joined ASUS and GIGABYTE in the PC peripherals market with its CK Series mechanical keyboard. Like GIGABYTE’s Osmium, it features Cherry MX Red switches. Unlike the Osmium, it’s priced to move at $69.99. But what’s it like to live with one? Let’s find out.

It’s getting crowded in the mechanical keyboard market.

It used to be that only companies that specialized in PC peripherals – you know, mice and keyboards and other input devices – made and sold mechanical keyboards. Names such as Metadot (makers of the acclaimed Das keyboards) and SteelSeries were among the earliest to dominate the market; they outsold the likes of Leopold, Noppoo, Ducky, and Filco, specialist brands from Asia and Europe. Fairly recently, the likes of Razer, Corsair, Thermaltake, Logitech, and Cooler Master (through its Storm Brand) have also decided to compete for market share. Even Newegg, through its Rosewill brand, has seen fit to issue its own range of mechanical keyboards.

Then last year, GIGABYTE, a company primarily known as a motherboard and graphics card manufacturer, joined the party with its Osmium, which we reviewed. This was a bit of an eye-opener, because although the company had already previously established itself in the gaming peripherals market with mice and keyboards through its Aivia brand, the Osmium was its first mechanical plank. Fellow industry giant ASUS has also teased its own mechanical keyboard designs, most recently at this year’s Computex. ASUS’ own debut in the market feels inevitable at this point.

It surprised us at Techgage when MSI decided to throw its hat into the mechanical keyboard ring as well, duplicating GIGABYTE’s move and beating ASUS to market. I heard about the GK-601 first (quite by accident, actually), so we tried to secure one for review; due to a paucity of available samples, MSI offered its CK Series mechanical keyboard instead.

Just between you and me, “CK Series” is a strange name. But that is its official moniker. 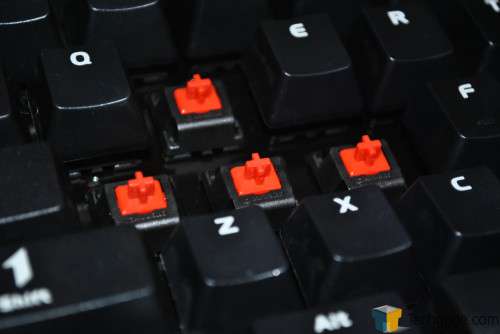 The CK Series is equipped with Cherry MX Red switches. The photo above shows a close-up of the WASD cluster sans their key caps, exposing the key switches for inspection. 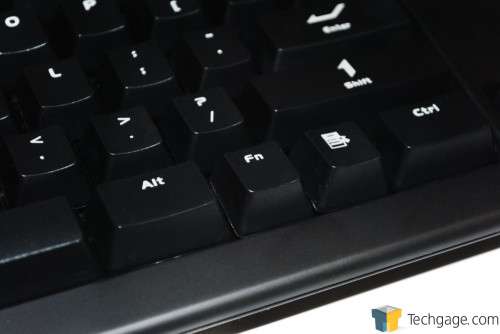 This keyboard has a standard 104-key count. There are no special keys except for a Fn modifier key to the right of the right-side Alt key (instead of second Windows key). MSI has clearly adopted a no-frills approach with this product. 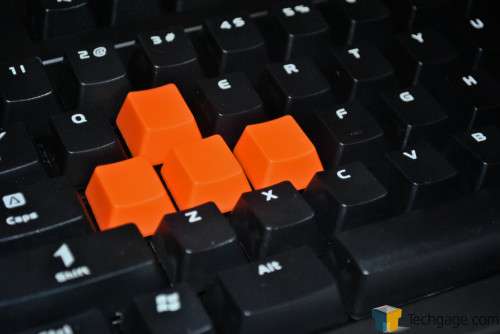 Further confirming this point is the fact that MSI included hardly additional accessories to the CK Series retail package. The CK Series does have four alternate key caps in bright orange and a key cap puller in a small baggie, along with a perfunctory quick start guide booklet. The photo above shows the alternate key caps installed in place of the WASD cluster. They are certainly eye-catching, even if they aren’t labeled. 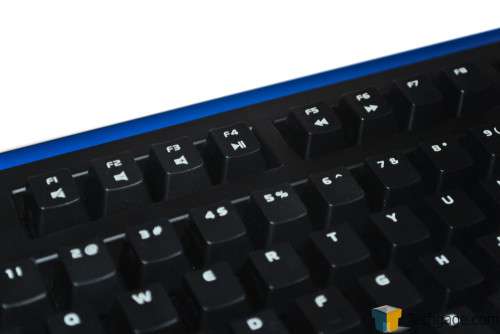 The CK Series keyboard’s F1-F6 keys are dual-function, working also as multimedia shortcut when pressed simultaneously with the aforementioned Fn key. From F1 through F6, they work as Mute, Volume Down, Volume Up, Play/Pause, Previous Track, and Next Track. Pairing these six F keys with the Fn modifier is an elegant way to add useful features to what is otherwise a barebones product. 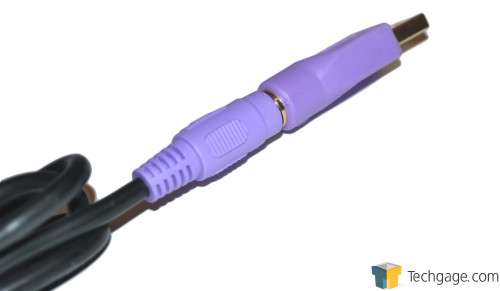 Somewhat unusually, the CK Series has a PS/2 connector at the end of its cable. MSI does provide a USB 2.0 adapter; it is attached to the PS/2 connector straight out of the box. This is the first modern keyboard I’ve seen that has a PS/2 connector by default. It’s a curious choice that confers only one real advantage: NKRO (N Key Rollover) is enabled by default, with the keyboard then stepping down to a 6-key maximum for simultaneous key presses if connected via USB 2.0. Oh, and speaking of the cable, it is not braided, covered instead in a rubber sleeve. Like the rest of the keyboard, it is basic and simple. 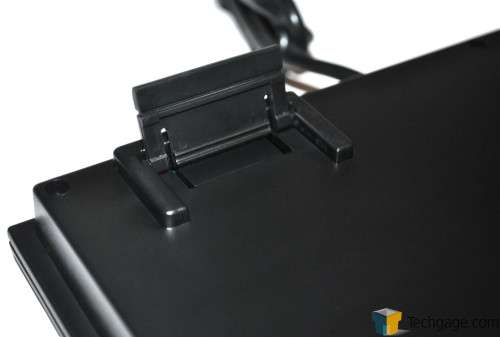 I took a shot of CK Series’ feet. Nothing particularly notable here, but perhaps there are some Rex Ryan types out there who have a foot fetish, albeit for keyboards. 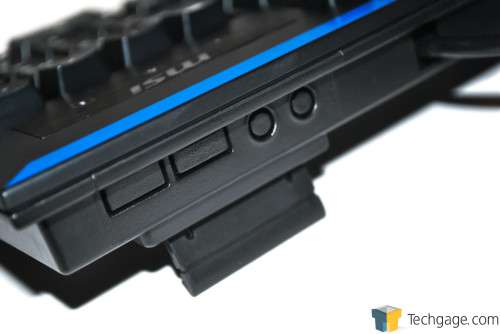 This photo shows something curious on the CK Series’ back side. These are openings on the keyboard’s chassis that have remained covered up. Based on the shapes, these cutouts are for a pair of USB connectors and two 3.5mm audio connectors (one for mic in, another for headphone out). Since the more upscale GK-601 does have these connectors on its backside, it certainly appears that the two models share the exact same chassis. 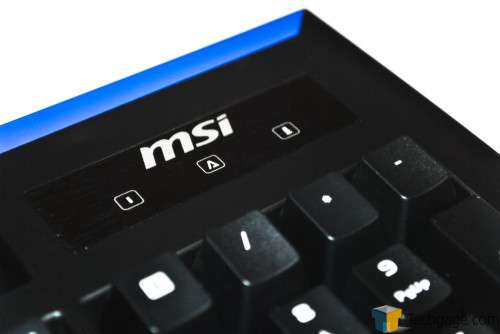 There’s really nothing ostentatious or garish about the CK Series’ looks. It does have two relatively understated concessions to bling: A blue “racing stripe” spanning the plank’s top edge, and a very smart looking MSI brand set in what looks like black brushed metal. It doesn’t have some of its rivals’ trapezoidal outlines or heavily sculpted surface treatments. MSI’s mechanical keyboards have obviously stuck to the design credo emphasizing simplicity, which is no bad thing.

Now that we’ve had a visual tour of the CK Series keyboard, let’s put it through its paces and see what it’s like in the real world.