by Rob Williams on August 5, 2014 in Motherboards

Just because a PC is being built for gaming, it doesn’t mean that it has to be enormous. With MSI’s Z97I Gaming AC, the ability to build a super-small gaming rig is granted, thanks to its mini-ITX form-factor. Some perks include Killer Ethernet networking, a full assortment of audio enhancements, and a software suite well-worth checking out.

A couple of weeks ago, I took a look at ASUS’ Z97I-PLUS, its flagship mini-ITX motherboard for its mainstream series. In the same article, I made multiple comparisons to MSI’s Z97I Gaming AC, as it was the only other mini-ITX Z97 I had around. While it’s not fair to compare these two boards in all respects, it’s still interesting to see how they differ.

ASUS’ Z97I-PLUS is targeted at the mainstream audience, much like MSI’s Z97I AC that I’ll talk a bit about later. The Z97I Gaming AC, on the other hand, has gamers (surprise!) in its sights.

Aside from the board’s great-looking aesthetics, MSI caters to the gaming audience here with a robust networking and audio solution, and because a mini-ITX board would be a great base for an HTPC gaming rig, the company even touts SteamOS support. Further, a six-month license of XSplit Gamecaster is included for those that like to stream their games. 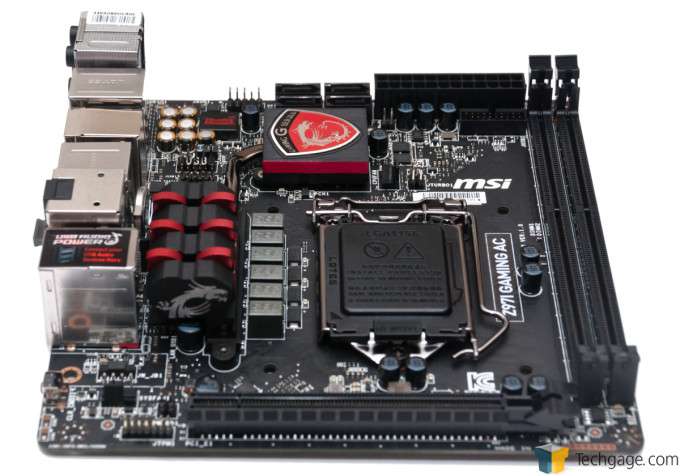 MSI’s Z97I Gaming AC has a proper gaming aesthetic, one that I think looks great overall. In particular, the design of the heatsink over the MOSFETs is attractive, as is the “G Series” emblem at the other end.

I’ll cover the board design and layout on the following page, but to help you gain an immediate understanding of what this board offers, you can refer to this specs table:

It might be a small board, but the Z97I Gaming AC is loaded to the brim with features. Like all mini-ITX boards, this one includes just a single x16 PCIe slot. Because it’s sometimes hard to find a GPU that fits into a mini-ITX chassis without issue, MSI offers a couple of different models that are designed for that specific purpose, such as the R9 270X Gaming 2G ITX. If you want something more powerful, you’re free to install whatever GPU you want as long as the chassis you’re using supports its length.

What sets the Z97I Gaming AC apart from most other boards is that MSI’s chosen to implement a Qualcomm Killer Ethernet E2200 solution for the networking. I’m not fan of Killer Ethernet, and would rather never see it implemented on a motherboard with just a single NIC, but it’s not hard to understand the reasons behind MSI choosing it. Once Qualcomm begins to offer Linux drivers for these chipsets, I might warm up to it a little bit more.

Apart from that, the board’s specs look fantastic. Unlike the ASUS board I looked at a couple of weeks ago, this one includes 6 audio jacks, rather than just 3. We can see other differences with the mega-table below, including a comparison to MSI’s own Z97I AC.

Mini-ITX boards might be small, but that doesn’t mean that their features can’t differentiate a lot. Taking the Gaming AC, for example. It includes eSATA ports, whereas the others here do not, and it also includes a full suite of 6 audio ports (the ASUS board has 3). That said, there is something that stands out: Both of MSI’s boards include only 2 fan headers. Personally, I’d opt for 3 fan headers over both of those other perks – but you might disagree.

Outside of the expensive perk we know as Thunderbolt, MSI’s Gaming AC board is missing nothing that I can see – something that the back I/O port shot on the next page will do well to highlight. I appreciate the fact that this board, and the others here, all include Wi-Fi, because if that on-board NIC happens to die, Wi-Fi will be your only option – unless you don’t want to use a discrete graphics card, of course.

I think it’s safe to say that while the Z97I Gaming AC is the most expensive board of the three, it’s also the most feature-rich, thanks to its gamer-focus. Of course, top-level specs like these only paint a part of the picture, so let’s look at things more thoroughly, starting off with a hardware tour.