Well-built, feature-rich NAS devices don’t need to be expensive – and NETGEAR’s ReadyNAS Duo v2 proves it. As a “prosumer” model, it aims to deliver all that a home and small business user alike would need, so read on as we discover whether or not this $200 NAS offering should be in your sights.

Out of everything I have changed in my home environment, there’s only one thing I would deem irreplaceable.  The addition of a NAS to my network has literally changed the way I go about my day-to-day operation at home.  The consumption and retention of my data has been altered unrecognizably from where I was only a handful of years ago.  With the addition of Dynamic DNS, my data is available at all times, from anywhere in the world.

With CES 2013 quickly approaching, I am reminded of all my past experiences while attending the yearly trade show.  One event that sticks out in my mind was the NETGEAR press event at CES 2008, where the company debuted its new line of consumer NAS devices.  I had long been using NETGEAR for home network switching and routing, so being familiar with its offerings, I was pleasantly surprised to find the ReadyNAS Duo to be a very sturdy piece of kit.

With it’s all-metal housing and hot-swappable bays, NETGEAR was well ahead of the current home NAS market and I knew that I needed to have one.  Being unable to secure a review sample at CES, I returned home and waited for one to go on sale. Just before CES 2009, I found a ReadyNAS Duo in a Black Friday ad and quickly snatched it up.  Since that day, it’s been a very reliable backup destination, quietly sitting on an unassuming shelf.  It’s long been eclipsed in performance, but it’s stable – and that’s all that I can ask for out of a device built over 4 years ago.

This brings us to our review today.  This past summer, we were provided with a ReadyNAS Duo v2.  The v2 is NETGEAR’s follow-up to its popular ReadyNAS Duo NAS that we saw at CES 2009.  With updated internals, the v2 should be faster and quieter than the original hardware and with time to mature, a better administrator web interface.  The spec upgrades are necessary and expected, given the pace that technology advances, but the GUI is an absolute must.  Synology and QNAP both have been setting the standard over the past couple of years with their respective Web GUIs, and NETGEAR has been wise to revamp its as well.

The build quality of the ReadyNAS line of products has always set the benchmark for me when judging other NAS devices.  Constructed entirely out of metal – with the exception of the front door of the NAS – the v2 is a very sturdy device.  With its rigid feel, the v2 has an enterprise quality to it and would feel right at home in any environment where network-accessible storage is needed, be it home or in an enterprise environment.

The front of the v2 is clean, with 5 LEDs, 2 buttons and a USB 2.0 port all situated vertically along the left side.  Starting at the top, there is the power button and LED, disk activity LED, 2 disk status LEDs (one for each drive), USB and backup status LED, backup button and at the bottom, the USB 2.0 port.  Taking up over two-thirds of the front is the perforated drive bay door.  This opens up to the left, exposing the two lockable hot-swap drive bays and is held shut with the aid of a small magnet. 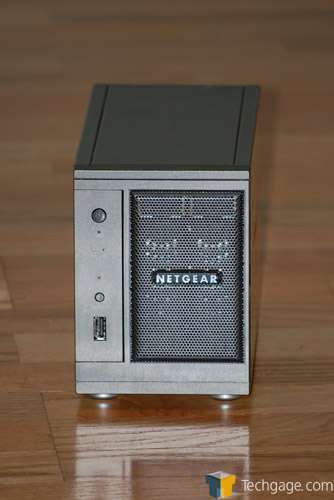 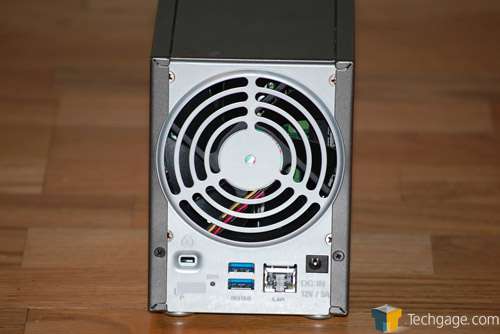 With the drive bay door opened, the hot-swappable drive cages can be by pushing down on the opening in the handle at the bottom.  The cages can be locked as well by sliding the locking switch to the locked position. 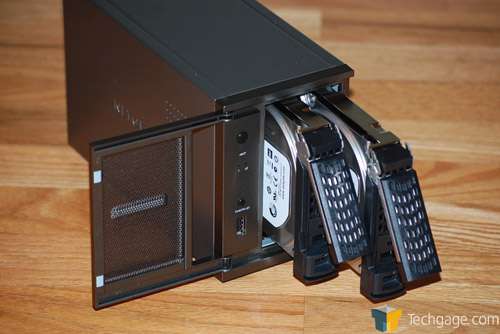 While the drive cages themselves can be locked, it’s a simple mechanism to prevent their accidental removal.