Well-built, feature-rich NAS devices don’t need to be expensive – and NETGEAR’s ReadyNAS Duo v2 proves it. As a “prosumer” model, it aims to deliver all that a home and small business user alike would need, so read on as we discover whether or not this $200 NAS offering should be in your sights.

Our testing procedures have been documented in past reviews but to recap, here is our process.

A few years ago, Intel created its own benchmarking tool for NAS devices called NASPT. Short for NAS Performance Toolkit, NASPT is, to quote Intel themselves, NASPT is a file system exerciser and analysis tool designed to enable direct measurement of home network attached storage (NAS) performance.) Essentially what it did was create a tool that mimics day-to-day workloads such as video playback, content creation and office productivity application emulation.

By creating this tool, Intel has made it extremely easy on those of us tasked with benchmarking NAS devices. You install NASPT on a host machine (recommended specs are 32-bit XP SP2 and 2GB of RAM), map a drive on that host that points to the NAS and decide which tests you want to run. These are the specs that I used when building out our test machine.

Our testbed is a simple, everyday machine that I happened to pick up cheap on Craigslist. It’s a very capable PC and one that works perfectly for the NASPT test.

An additional test that we are using in this review is a simple file copy to the v2 and then from the v2.  Using the Windows utility Robocopy, a 4GB file is transferred to the v2 and then back to the local machine after a reboot of the host machine.  This test is run three times, with the read and write times recorded and averaged out.

The disks we are using in the NETGEAR ReadyNAS Duo v2 are a pair of 7200.12 1TB Seagate drives.  It should be mentioned that our review sample shipped with only 1 Seagate 1TB drive.  An additional drive was added to the v2 for RAID testing.   Both drives have matching cache, spindle speed and capacity.

NETGEAR’s ReadyNAS Duo v2 has proven to be a capable NAS.  Adding to that, the device can be found online for well under $200, and I have found it for as low as $188 without drives.  At that price, the v2 is a steal.

Performance of the ReadyNAS Duo v2 won’t set any records, but with anything, you take the good with the “wish it were better.”  In my off-the-record testing, I streamed a high-quality Blu-ray rip to my media center from the v2.  Over a wired gigabit connection, I never once had any form of stutter or playback issues.  This, to me, is more than enough reason to appreciate what the v2 can offer.  I personally feel that speed doesn’t matter as much as reliability.

While I do expect a device to keep up with what is asked of it as long as my data is stored reliably, I have no issue with the read and writes of the device.  The v2 shines in this respect.  I have admittedly had this review sample in my possession for quite a while; in that time, it’s sat on my test bench, powered on and serving data.  Not once was there an issue that needed my attention.  This is the exact purpose that a home NAS should provide. 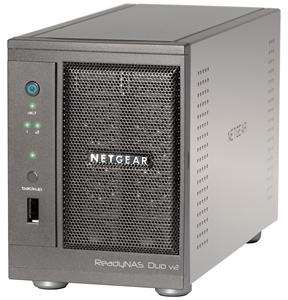 Another wonderful aspect of the v2 is the build quality.  It was mentioned earlier in the review that the NAS is constructed entirely out of metal.  This gives the device a rigid, durable feel.  This is a welcome departure from the plastic NAS devices available today from other vendors. – not that the plastic versus metal debate matters much.  A NAS box will get setup and then rarely ever touched again  but still, the v2 is a tank and I appreciate that.

I can find very little wrong with the NETGEAR ReadyNAS Duo v2.  The Web GUI is intuitive and and the hardware is stable.  If there was one gripe that I have, it’s with the lack of iSCSI support.  Synology has long had this feature in all of it’s devices and it’s been something that I have used on many occasions.  This isn’t to say that the exclusion of that feature is a bad thing, but rather, it’s something I would simply like to see.  The business-class ReadyNAS devices include this feature but the Duo is left in the cold.

The ReadyNAS Duo v2 is a stable, solid offering from NETGEAR and one that I have no problem recommending to anyone looking for an affordable and stable two-bay NAS.  It’s not the fastest, but it doesn’t need to be.  It’s all that most need and nothing more.