by Rob Williams on October 25, 2006 in Miscellaneous

Nikon recently announced 6 new digital cameras, including the S10. This camera is similar in design to their S4 released earlier this year, but has a few notable upgrades. Overall it’s a good camera, but has a few downsides.

Nikon has had an active release schedule this year, with well over 10 new releases. They covered all of their bases, including low end, mid-range, pro-sumer and also a new ultra-high end, the D2xs. Needless to say, since they have cut off their film camera supply, they have been working overtime on all things digital.

They released a few models earlier this year, but a few months ago “refreshed” their entire line-up. It’s a refresh, because some models look incredibly similar to what we have seen already. The S10 is no different, as it looks near identical to the S4 at first glace. In fact, these cameras use the same lens, CCD, shooting modes and body styles. It does of course have some notable upgrades, but none are -that- spectacular should you already own an S4 or similar. However, if you are in the market for a new digicam, the S10 may very well suit your needs.

During the review I will be referring to the S4 a lot, simply because there is no denying that the S10 is it’s replacement. The first thing that will catch your eye (probably) is its swivel design. Regardless of which angle you are holding the camera, the lens swivels up to 270°. This seems like a gimmick but after using the camera for a while, it’s actually something I’ve come to use more often than not. It’s more of a comfort feature than anything.

In the normal position, as you see below, it’s an odd looking device. You are sure to get looks, that’s for sure! 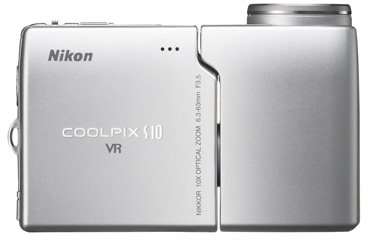 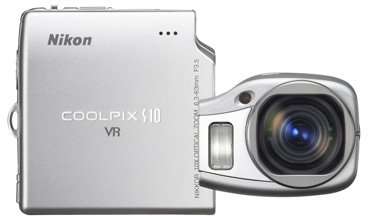 The camera is feature packed, even though it appears to only have a few buttons. There are four primary modes, but once you choose one, the menu button will open up an array of various options related to that mode. So, if you choose the “Scene” mode and push the “Menu” button, you will have the option to choose what type of scene you are dealing with. Regardless of mode, the “Menu” button will also allow you to setup the camera, or format your card.

In addition to a 6.0 megapixel capable CCD, the S10 also implements Vibration Reduction, a feature that speaks for itself. Using VR uses up your battery faster, but proves useful whenever you are using anything but the base focal range. Given the 10x zoom the lens can provide, the VR feature will become your friend. Very quickly.

As you’d expect, the lens is a Zoom-Nikkor that supports 6.3-63mm focal lengths. Thanks to the zoom, the actual max focal range hangs around 253mm, but that’s digital, not optical which the image quality will prove. After you hit 52mm, the image quality is degraded. Up to that point though, is quite good. The lens aperture is f/3.5.

The camera supports images of 2816*2112 resolutions, in large intervals all the way down to 640*480. Do people still use that resolution? I guess if you do, the option is there. 2816 offers two modes though, a standard one and then High. Presumably, High offers sharper images, but I have been unable to see true differences that warrant the extra MB’s the images will take up. Here are the results in KB/s after taking the same scene with the different modes:

I’d not recommend anything below the third setting though… the images come out near as sharp. Taking a 2048*1536 image and resizing it to a smaller resolution would retain more of the overall quality. All of the recent Nikon Digital Cameras I have used retain the same video quality, with the preferred method being VGA 640*480. The quality is actually quite good, and is certainly better than what most other cameras allow. You can grab a sample of the quality from our P3 review here. 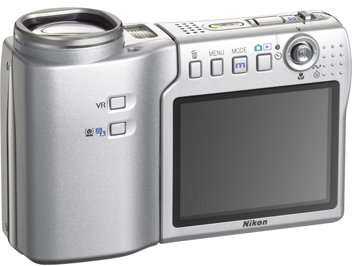 The camera includes quite a few useful features, such as the Panoramic Assist mode, which allows you to capture perfect panaromas with the help of the on screen display.

There are many other modes that the S10 offers, but that basically covers up what you should know.

When I first received the S10, I had expected it to be identical to the S4 in every single way, because they look so similar. However, the S10 proved to be more enjoyable to use overall, and the additional features would make this a better choice.

Though the S10 looks identical to the S4 at first glance, it’s actually far curvier. Cameras are meant to be sexy, after all. This is one thing I didn’t like about it though, as it simply made the camera feel awkward to hold. It takes some getting used to, especially if you are used to a standard model camera. Because of the swivel design though, your hands tend to be further apart from each other than if you were using a standard model. In this sense, its almost like the camera has a handle, and is easier to grip and steady, I have found.

One thing I love this camera for, are the sheer amount of options available. They cover many scenes, and reaching these options is easy thanks to it’s intuitive design. I do wish the “Ok” button was larger though and easier to use. During use, I sometimes shifted the button the wrong way to select an unwanted option. I did not find this was the case with the S4 however.

Back to intuitive. In the picture below, you can see that the VR and Portrait buttons are directly above the lens, as opposed to near where your index finger will be. This proves to be a perfect spot, because it gives you ultra quick access to the features should you need them. Since VR eats up your battery fast, you will push the button, take the shot, and push it again. The same goes for the Portrait button also. It simply saves time for you having to jump into the menu and fiddle around there. 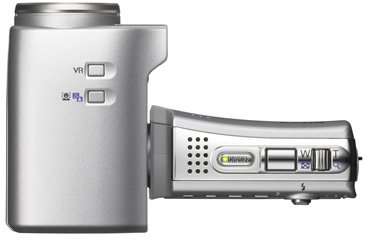 The camera by default uses PTP connectivity, which I hate. Bad. Luckily enough, there is an option in the menu to switch to the classic method, meaning that when you hook the camera up to your PC it will act as a normal storage device. PTP may prove a better choice for inexperienced computer users.

I am a fan of real-time results, so I was impressed to see that the S10 shows you the result of W/B changes before you even take a picture. Recent Nikon cameras may also have this feature, but this is the first time I had actually noticed it. The same goes for the color modes, which I will touch on later in the review.

One thing I came to dislike quick was the fact that the image quality indoors without use of a flash, is horrible. It doesn’t matter what focal length you are at, or what the room lighting is like. Outdoor shots on sunnier days is really the only time you’d want to disable the flash.

As a whole, I enjoyed using the S10, but will touch up even more in the conclusion. For now, let’s check out some image quality to see what the camera is capable of.